Classical Marxism refers to the economic, philosophical, and sociological theories expounded by Karl Marx and Friedrich Engels, as contrasted with later developments in Marxism, especially Leninism and Marxism–Leninism.

Karl Marx in 1861
For more details on this topic, see Karl Marx.

Karl Heinrich Marx (May 5, 1818, Trier, Germany – March 14, 1883, London) was an immensely influential German Jewish philosopher, sociologist, political economist, and revolutionary socialist. Marx addressed a wide range of issues, including alienation and exploitation of the worker, the capitalist mode of production and historical materialism, although he is most famous for his analysis of history in terms of class struggles, summed up in the opening line of the introduction to the Communist Manifesto: "The history of all hitherto existing society is the history of class struggles." The influence of his ideas, already popular during his life, was given added impetus by the victory of the Russian Bolsheviks in the 1917 October Revolution, and there are few parts of the world which were not significantly touched by Marxian ideas in the course of the twentieth century.

As the American Marx scholar Hal Draper remarked, "there are few thinkers in modern history whose thought has been so badly misrepresented, by Marxists and anti-Marxists alike."

For more details on this topic, see Influences on Karl Marx.

Marx studied under one of Hegel's pupils, Bruno Bauer, a leader of the circle of Young Hegelians to whom Marx attached himself. However, from 1841, Marx and Engels came to disagree with Bruno Bauer and the rest of the Young Hegelians about socialism and also about the usage of Hegel's dialectic and progressively broke away from German idealism and the Young Hegelians. Marx's early writings are thus a response towards Hegel, German Idealism and a break with the rest of the Young Hegelians. Marx, "stood Hegel on his head," in his own view of his role, by turning the idealistic dialectic into a materialistic one, in proposing that material circumstances shape ideas, instead of the other way around. In this, Marx was following the lead of Feuerbach. His theory of alienation, developed in the Economic and Philosophical Manuscripts of 1844 (published in 1932), inspired itself from Feuerbach's critique of the alienation of Man in God through the objectivation of all his inherent characteristics (thus man projected on God all qualities which are in fact man's own quality which defines the "human nature"). But Marx also criticized Feuerbach for being insufficiently materialistic.

Marx critiqued Smith and Ricardo for not realizing that their economic concepts reflected specifically capitalist institutions, not innate natural properties of human society, and could not be applied unchanged to all societies. He proposed a systematic correlation between labour-values and money prices. He claimed that the source of profits under capitalism is value added by workers not paid out in wages. This mechanism operated through the distinction between "labour power", which workers freely exchanged for their wages, and "labour", over which asset-holding capitalists thereby gained control. This practical and theoretical distinction was Marx's primary insight, and allowed him to develop the concept of "surplus value", which distinguished his works from that of Smith and Ricardo.

Rousseau was one of the first modern writers to seriously attack the institution of private property, and therefore is sometimes considered a forebear of modern socialism and communism, though Marx rarely mentions Rousseau in his writings.

In 1833 France was experiencing a number of social problems arising out of the Industrial Revolution. A number of sweeping plans of reform were developed by thinkers on the left. Among the more grandiose were the plans of Charles Fourier and the followers of Saint-Simon. Fourier wanted to replace modern cities with utopian communities, while the Saint-Simonians advocated directing the economy by manipulating credit. Although these programs didn’t have much support, they did expand the political and social imagination of Marx.[1]

Pierre-Joseph Proudhon participated in the February 1848 uprising and the composition of what he termed "the first republican proclamation" of the new republic. But he had misgivings about the new government because it was pursuing political reform at the expense of the socio-economic reform, which Proudhon considered basic. Proudhon published his own perspective for reform, Solution du problème social, in which he laid out a program of mutual financial cooperation among workers. He believed this would transfer control of economic relations from capitalists and financiers to workers. It was Proudhon's book What is Property? that convinced the young Karl Marx that private property should be abolished.[3]

Other influences on Marx

Marx's revision of Hegelianism was also influenced by Engels' book, ‘’The Condition of the Working Class’’ in England in 1844, which led Marx to conceive of the historical dialectic in terms of class conflict and to see the modern working class as the most progressive force for revolution.

Marx was influenced by Antique materialism, especially Epicurus (to whom Marx dedicated his thesis, ‘’Difference of natural philosophy between Democritus and Epicurus’’, 1841) for his materialism and theory of clinamen which opened up a realm of liberty.

Giambattista Vico propounded a cyclical theory of history, according to which human societies progress through a series of stages from barbarism to civilization and then return to barbarism. In the first stage—called the Age of the Gods—religion, the family, and other basic institutions emerge; in the succeeding Age of Heroes, the common people are kept in subjection by a dominant class of nobles; in the final stage—the Age of Men—the people rebel and win equality, but in the process society begins to disintegrate. Vico's influence on Marx is obvious.[4]

Marx drew on Lewis H. Morgan and his social evolution theory. He wrote a collection of notebooks from his reading of Lewis Morgan but they are regarded as being quite obscure and only available in scholarly editions. (However Engels is much more noticeably influenced by Morgan than Marx).

For more details on this topic, see Friedrich Engels. 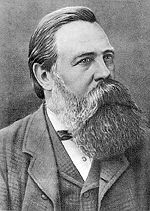 Friedrich Engels was a co-founder and proponent of Marxism.

In 1842 his father sent the young Engels to England to help manage his cotton factory in Manchester. Shocked by the widespread poverty, Engels began writing an account which he published in 1845 as The Condition of the Working Class in England in 1844 ([1]).

In July 1845 Engels went to England. There he met an Irish working-class woman named Mary Burns (Crosby), with whom he lived until her death in 1863 (Carver 2003:19). Later he lived with her sister, Lizzie, marrying her the day before she died in 1877 (Carver 2003:42). These women may have introduced him to the Chartist movement, of whose leaders he met several, including George Harney.

Engels actively participated in the Revolution of 1848, taking part in the uprising at Elberfeld. Engels fought in the Baden campaign against the Prussians (June/July 1849) as the aide-de-camp of August Willich, who commanded a Free Corps in the Baden-Palatinate uprising. [2]

Marx and Engels first met in person in September 1844. They discovered that they had similar views on philosophy and on capitalism and decided to work together, producing a number of works including Die heilige Familie (The Holy Family). After the French authorities deported Marx from France in January 1845, Engels and Marx decided to move to Belgium, which then permitted greater freedom of expression than some other countries in Europe. Engels and Marx returned to Brussels in January 1846, where they set up the Communist Correspondence Committee.

In 1847 Engels and Marx began writing a pamphlet together, based on Engels' The Principles of Communism. They completed the 12,000-word pamphlet in six weeks, writing it in such a manner as to make communism understandable to a wide audience, and published it as The Communist Manifesto in February 1848. In March, Belgium expelled both Engels and Marx. They moved to Cologne, where they began to publish a radical newspaper, the Neue Rheinische Zeitung. By 1849 both Engels and Marx had to leave Germany and moved to London. The Prussian authorities applied pressure on the British government to expel the two men, but Prime Minister Lord John Russell refused. With only the money that Engels could raise, the Marx family lived in extreme poverty. The contributions of Marx and Engels to the formation of Marxist theory have been described as inseparable.[5]

After Marx's death in 1883, Engels devoted much of the rest of his life to editing and translating Marx's writings. However, he also contributed significantly to feminist theory, seeing for instance the concept of monogamous marriage as having arisen because of the domination of men over women for the purpose of transferring (inheriting) property to their heir/ male children. In this sense, he ties communist theory to the family, arguing that men have dominated women just as the capitalist class has dominated workers. Engels died in London in 1895.

Marx believed that class identity was configured in the relations with the mode of production. In other words, a class, is a collective of individuals who have a similar relationship with the means of production (as opposed to the more common-sense idea that class is determined by wealth alone, i.e. high class, middle class, poor class).

The Marxist theory of historical materialism understands society as fundamentally determined by the material conditions at any given time - this means the relationships which people enter into with one another in order to fulfill their basic needs, for instance to feed and clothe themselves and their families.[13] In general Marx and Engels identified five successive stages of the development of these material conditions in Western Europe.[14]