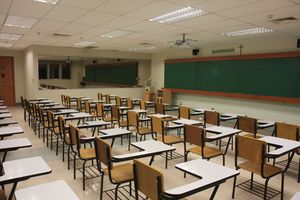 A classroom at the De La Salle University in Manila, Philippines 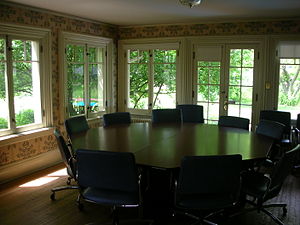 A classroom designed for dialogue at Shimer College 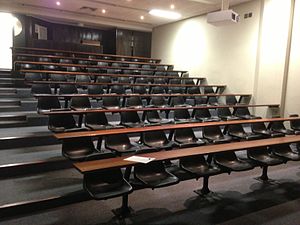 A lecture classroom at the University of Cape Town 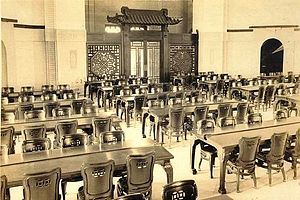 A classroom or schoolroom is a room in which classes are held. Classrooms are found in educational institutions of all kinds, from preschools to universities, and may also be found in other places where education or training is provided, such as corporations and religious and humanitarian organizations. The classroom attempts to provide a space where learning can take place uninterrupted by outside distractions.

For lessons that require specific resources or a vocational approach different types of classrooms both indoors and outdoors are used. This allows for learning in an authentic context that fosters the natural development of the particular vocational skill.[1] This is known as situated learning. Classrooms can range from small groups of five or six to big classrooms with hundreds of students. A large class room is also called a lecture hall. A few examples of classrooms are computer labs which are used for IT lessons in schools, gymnasiums for sports, and science laboratories for biology, chemistry and physics. There are also small group classrooms where students learn in groups of about 7 or less.

Most classrooms have a large writing surface where the instructor or students can share notes with other members of the class. Traditionally, this was in the form of a blackboard but these are becoming less common in well-equipped schools because of new alternatives like flipcharts, whiteboards and interactive whiteboards. Many classrooms also have TVs, maps, charts, pencils, books, monographs and LCD projectors for presenting information and images from a computer.

In the past, schools and institutions would often have one computer lab that served the entire school only at certain times of the week. Computers in the classroom itself increase interest in learning and awareness of the importance of what is being taught. Children are less likely to feel that a subject is archaic if the teacher uses new technological instructional techniques, increasing the students’ interest in learning something new. A study shows that children taught with the integration of technology improved in testing significantly over those who did not.[2]

The Classroom of the Future is an education project in the United Kingdom. Twelve local education authorities sharing about £13 million to develop around 30 pilot projects. The buildings have roughly three classrooms in them, which contain enough laptops or tablet computers for each person. The classrooms are designed to be environmentally friendly. The buildings contain toilets which use rainwater, and use windturbines and solar panels for electricity and heating.

The layout, design and decor of the classroom has a significant effect upon the quality of the educational experience.[3] Attention to the acoustics and colour scheme may reduce distractions and aid concentration. The lighting and furniture likewise influence factors such as student attention span.[4] 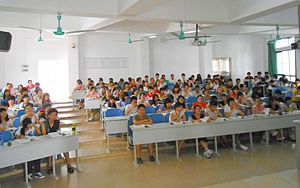 Historically, relatively few pupil centric design principles were used in the construction of classrooms. In 19th century Britain, one of the few common considerations was to try and orient new buildings so the class windows faced north as much as possible, while avoiding west or southern facing windows, as in Britain northern light causes less glare.[5] Desks were often arranged in columns and rows, with a teacher’s desk at the front, where he or she would stand and lecture the class. Little color was used for fear of distracting the children. In the 1950s and 60s cheap and harsh fluorescent lights were sometimes used, which could cause eyestrain. Research has suggested that optimal use of daylight, acoustics, color selection and even the arrangement of the furniture in the classroom can affect pupils academic success.

In the design of a classroom, desk arrangements are very essential to the decor and design of the classroom followed by seating arrangements for the students. Usually classroom desks are arranged in rows or columns, but there is many more ways to arrange the desks, for example making a circle with the desks so that it's more of a group discussion or having the desks in a "U" shape for group discussions and easy access for the teacher. Color is also a big asset to the classroom by realating the colors to the subjects learned in the classroom to help the students learn. Also color helps the atmosphere be fun and exciting and help visual stimulation for the students.

The acoustics of the classroom are very often overlooked, but are an important part of the success of a child. Choosing only materials that cause sound to reverberate, such as tile floors and hard wall surfaces, greatly increases noise levels and can prove detrimental to learning. One study of hyperactive versus control groups of children found that white noise has no impact on either group, but that auditory stimulation such as distant conversations or music has a negative effect on both groups of students. Children with attention deficit disorder scored higher on tests when white noise was being pumped into the classroom than when music was played. The control group of children as well as the hyperactive group of children averaged the same test scores when there was no sound as when white noise was being played.[6]

By utilizing soft surfaces, especially on the floor, the sounds within and outside of the classroom will be diminished, taking away from the distractions facing students and improving not just the test scores of hyperactive children, but those without attention deficit disorder as well. Although carpet is an obvious choice for sound absorption, it may not be suitable for high traffic areas like hallways. In such cases, other sound absorbing materials, such as cork, can be used. The use of sound absorbing ceiling tiles may also be a wise choice for areas where carpet cannot be used for practical purposes.

Color theory refers to the psychological effects color has on the human body. Red is said to increase both aggression and appetite, a poor combination for a school’s interior. Yellow increases adrenaline levels and is also undesirable for a school setting. Blue, green, and brown create a relaxing and calming environment, which is a positive for the classroom.[7] However, blue also is associated with cold and sadness and elongates the sense of time, which would make a blue classroom tortuous for students (Vodvarka, 1999). Warm colors are often favored by students, making them more alert and increasing brain activity, which helps in increasing test scores. Cool colors had the opposite effect.[8] By balancing warm and cool colors, bright and subdued, a pleasing effect can be achieved that will reduce absenteeism in schools and keep the students focused on what the teacher is saying. Test scores go up when children are not in a stark white environment, which can feel sterile and cold.[9][10] 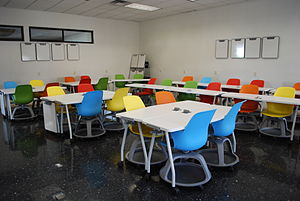 Furniture is an important aspect because students spend most of their time seated in the classroom. The furniture should be able to move and easy to arrange to allow students to sit in places that are best suited for their learning styles.[11]

Traditionally, classrooms have had one setup: straight rows of desks facing the front of the classroom. The row style allows teachers ample amount of space to walk around.[12] This makes it easier for teachers to supervise the students work and catch any students that may be misbehaving, insuring that students stay focused. Studies have found that the row style also fosters less off topic talking causing the atmosphere to be more conducive to learning.[13] While the row style sounds ideal from a teacher’s stand point it can be damaging to the student’s well being. The row style of desk arrangement has been found to cause the students to withdraw.[14]

An alternative to the traditional row style desk pavement is to arrange the desks in groups. Phil Beadle, a UK Secondary Teacher of the Year, believes that it is best to arrange the desks in groups of six desks if at all possible. This allows for the most use out of the desk arrangement as you have the ability to utilize groups of two, three, or six students without moving a single chair.[15] Beadle isn’t the only teacher to swear by group desk arrangement; studies have shown that the group desk placement setup produces a greater number of on task actions than any other form of desk placement.[14] The group setup does have one potentially serious negative side effect. Students sitting in group desk placements are more likely to misbehave when the teacher isn’t looking.[12] To avoid this the groups of desks should be arranged around the outside of the room giving the teacher plenty of room to walk around and supervise as well as providing room for kinesthetic activities that can be beneficial to the students learning.[15]

The final popular desk arrangement is the circle/semicircle placement. This particular desk setup is growing in popularity due to the numerous positive outcomes it provides. The circle desk arrangement facilitates the flow of ideas by fostering positive group dynamics.[12] When sitting in a circle it is easier for students to not only see who is talking, but to make eye contact with the speaker. Students sitting in a circle arrangement tend to feel more comfortable speaking up and asking questions.[13] This style of desk placement also makes it easier for teachers to control the class, preventing misbehaving and off task comments as it allows them to easily see all the students, and allows all the students to see the teacher.[12]

Challenges to the classroom 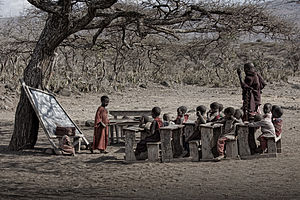 Online learning technologies make it possible for learning to take place at any time, at any place, and at any pace that the learner desires. This is particularly important for adult students who may need to schedule their learning around work and parenting responsibilities.[16] According to the American Society for Training and Development, as of 2014, approximately 25% of employee training hours take place online rather than in a classroom.[17] However, critics argue that even the classroom space is full of distractions in the 21st century since even though access to the online world may be restricted by some institutions, students may find distractions in their physical vicinity and so tend to multitask and divide their attention without focusing on any one task at a time.[18]

The traditional classroom has also been attacked by advocates of various forms of alternative education. Maria Montessori wrote that "Stationary desks and chairs [are] proof that the principle of slavery still informs the school".[19]