From Infogalactic: the planetary knowledge core
Jump to: navigation, search
This article is about technological innovations related to clean coal. For clean coal as a general concept, see clean coal.

"Clean" coal technology is a collection of technologies being developed to mitigate the environmental impact of coal energy generation.[1] When coal is used as a fuel source, the gaseous emissions generated by the thermal decomposition of the coal include sulphur dioxide (SO2), nitrogen oxides (NOx), carbon dioxide (CO2), mercury, and other chemical byproducts that vary depending on the type of the coal being used. These emissions have been established to have a negative impact on the environment and human health, contributing to acid rain, lung cancer and cardiovascular disease. As a result, clean coal technologies are being developed to remove or reduce pollutant emissions to the atmosphere. Some of the techniques that would be used to accomplish this include chemically washing minerals and impurities from the coal, gasification (see also IGCC), improved technology for treating flue gases to remove pollutants to increasingly stringent levels and at higher efficiency, carbon capture and storage technologies to capture the carbon dioxide from the flue gas and dewatering lower rank coals (brown coals) to improve the calorific value, and thus the efficiency of the conversion into electricity. Figures from the United States Environmental Protection Agency show that these technologies have made today’s coal-based generating fleet 77 percent cleaner on the basis of regulated emissions per unit of energy produced.[2]

Clean coal technology usually addresses atmospheric problems resulting from burning coal. Historically, the primary focus was on SO2 and NOx, the most important gases in causation of acid rain, and particulates which cause visible air pollution and deleterious effects on human health. More recent focus has been on carbon dioxide (due to its impact on global warming)[3] and concern over toxic species such as mercury.[4] Concerns exist regarding the economic viability of these technologies and the timeframe of delivery,[5] potentially high hidden economic costs in terms of social and environmental damage,[6] and the costs and viability of disposing of removed carbon and other toxic matter.[7][8]

Several different technological methods are available for the purpose of carbon capture as demanded by the clean coal concept:

The Kemper County IGCC Project, a 582 MW coal gasification-based power plant, will use pre-combustion capture of CO2 to capture 65% of the CO2 the plant produces, which will be utilized/geologically sequestered in enhanced oil recovery operations.[13]

The Saskatchewan Government's Boundary Dam Integrated Carbon Capture and Sequestration Demonstration Project will use post-combustion, amine-based scrubber technology to capture 90% of the CO2 emitted by Unit 3 of the power plant; this CO2 will be pipelined to and utilized for enhanced oil recovery in the Weyburn oil fields.[14] 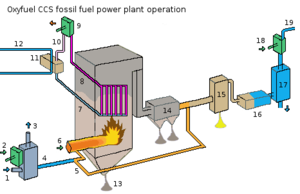 An early example of a coal-based plant using (oxy-fuel) carbon-capture technology is Swedish company Vattenfall’s Schwarze Pumpe power station located in Spremberg, Germany, built by German firm Siemens, which went on-line in September 2008.[15][16] The facility captures CO2 and acid rain producing pollutants, separates them, and compresses the CO2 into a liquid. Plans are to inject the CO2 into depleted natural gas fields or other geological formations. Vattenfall opines that this technology is considered not to be a final solution for CO2 reduction in the atmosphere, but provides an achievable solution in the near term while more desirable alternative solutions to power generation can be made economically practical.[16]

Other carbon capture and storage technologies include those that dewater low-rank coals. Low-rank coals often contain a higher level of moisture content which contains a lower energy content per tonne. This causes a reduced burning efficiency and an increased emissions output. Reduction of moisture from the coal prior to combustion can reduce emissions by up to 50 percent.[citation needed]

The UK government's is working towards a clean energy future and supports clean coal projects across the country. In August 2010, UK-based company B9 Coal announced a clean coal project with 90% carbon capture to be put forward to DECC. This would help the UK raise its profile amongst green leaders across the world. This proposed project, gasifies coal underground and processes it to create pure streams of hydrogen and carbon dioxide. The hydrogen is then used as an emissions-free fuel to run an alkaline fuel cell whilst the carbon dioxide is captured. This UK project could provide a world-leading template for clean coal with CCS globally.

Demonstration projects in the United States

In the late 1980s and early 1990s, the U.S. Department of Energy (DOE) began conducting a joint program with the industry and State agencies to demonstrate clean coal technologies large enough for commercial use. The program, called the Clean Coal Technology & Clean Coal Power Initiative (CCPI), has had a number of successes that have reduced emissions and waste from coal-based electricity generation.[19] The National Energy Technology Laboratory has administered three rounds of CCPI funding and the following projects were selected during each round:[20]

These programs have helped to meet regulatory challenges by incorporating pollution control technologies into a portfolio of cost-effective regulatory compliance options for conventional and developmental coal-fired power plants. This portfolio has positioned the U.S. as a top exporter of clean coal technologies such as those used for SOx, NOx and mercury, and more recently for carbon capture, consistent with a goal of deploying advanced coal-based power systems in commercial service with improved efficiency and environmental performance to meet increasingly stringent environmental regulations and market demands, leading to widespread, global deployment which will contribute to significant reductions in greenhouse gas emissions. The DOE continues its programs and initiatives through regional sequestration partnerships, a carbon sequestration leadership forum and the Carbon Sequestration Core Program, a CCS research and development program.[21]

According to a report by the assistant secretary for fossil energy at the U.S. Department of Energy, clean coal technology has paid measurable dividends. Technological innovation introduced through the CCT Program now provides consumers cost-effective, clean, coal-based energy.[22]

Clean coal and the environment

According to United Nations Intergovernmental Panel on Climate Change, the burning of coal, a fossil fuel, is a major contributor to global warming. (See the UN IPCC Fourth Assessment Report). As 25.5% of the world's electrical generation in 2004 was from coal-fired generation (see World energy resources and consumption), reaching the carbon dioxide reduction targets of the Kyoto Protocol will require modifications to how coal is utilized.[23]

Coal, which is primarily used for the generation of electricity,[24] is the second largest domestic contributor to carbon dioxide emissions in the USA.[25] The public has become more concerned about global warming which has led to new legislation. The coal industry has responded by running advertising touting clean coal in an effort to counter negative perceptions and claiming more than $50 billion towards the development and deployment of "traditional" clean coal technologies over the past 30 years; and promising $500 million towards carbon capture and storage research and development.[26]

Some in the coal industry[who?] and the U.S. Department of Energy[who?] refer to carbon capture and sequestration (CCS) as the latest in "clean coal" technologies. The "clean coal" terminology is generally not endorsed by professionals in CCS, and is actively opposed by environmental organizations that favor CCS.[citation needed] CCS is a means to capture carbon dioxide from any source, compress it to a dense liquid-like state, and inject and permanently store it underground. Currently, there are more than 80 carbon capture and sequestration projects underway in the United States.[27] All components of CCS technology have been used for decades in conjunction with enhanced oil recovery and other applications; commercial-scale CCS is currently being tested in the U.S. and other countries.[by whom?] Proposed CCS sites are subjected to extensive investigation and monitoring to avoid potential hazards, which could include leakage of sequestered CO2 to the atmosphere, induced geological instability, or contamination of aquifers used for drinking water supplies.[28][29]