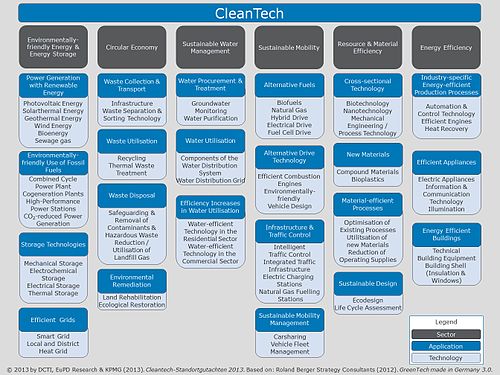 Clean technology includes recycling, renewable energy (wind power, solar power, biomass, hydropower, biofuels, etc.), information technology, green transportation, electric motors, green chemistry, lighting, Greywater, and many other appliances that are now more energy efficient. It is a means to create electricity and fuels, with a smaller environmental footprint and minimise pollution. To make green buildings, transport and infrastructure both more energy efficient and environmentally benign. Environmental finance is a method by which new clean technology projects that have proven that they are "additional" or "beyond business as usual" can obtain financing through the generation of carbon credits. A project that is developed with concern for climate change mitigation (such as a Kyoto Clean Development Mechanism project) is also known as a carbon project.

While there is no standard definition of "clean technology," it has been described by Clean Edge, a clean technology research firm, as "a diverse range of products, services, and processes that harness renewable materials and energy sources, dramatically reduce the use of natural resources, and cut or eliminate emissions and wastes." It notes that "Clean technologies are competitive with, if not superior to, their conventional counterparts. Many also offer significant additional benefits, notably their ability to improve the lives of those in both developed and developing countries". Many countries now have cleantech representatives to speak about the countries' problems, including Russia, Japan and China.

Investments in clean technology have grown considerably since coming into the spotlight around 2000. According to the United Nations Environment Program, wind, solar, and biofuel companies received a record $148 billion in new funding in 2007 as rising oil prices and climate change policies encouraged investment in renewable energy. $50 billion of that funding went to wind power. Overall, investment in clean-energy and energy-efficiency industries rose 60 percent from 2006 to 2007.[1] By 2018 it is forecast that the three main clean technology sectors, solar photovoltaics, wind power, and biofuels, will have revenues of $325.1bn.[2]

Cleantech is any product or service that improves operational performance, productivity, or efficiency while reducing costs, inputs, energy consumption, waste, or environmental pollution. Its origin is the increased consumer, regulatory, and industry interest in clean forms of energy generation—specifically, perhaps, the rise in awareness of global warming, climate change, and the impact on the natural environment from the burning of fossil fuels. Cleantech is often associated with venture capital funds and land use organizations.

The idea of cleantech first emerged among a group of emerging technologies and industries, based on principles of biology, resource efficiency, and second-generation production concepts in basic industries. Examples include: energy efficiency, selective catalytic reduction, non-toxic materials, water purification, solar energy, wind energy, and new paradigms in energy conservation. Since the 1990s, interest in these technologies has increased with two trends: a decline in the relative cost of these technologies and a growing understanding of the link between industrial design used in the 19th century and early 20th century, such as fossil fuel power plants, the internal combustion engine, and chemical manufacturing, and an emerging understanding of human-caused impact on earth systems resulting from their use (see articles: ozone hole, acid rain, desertification, climate change and global warming).

In 2008, clean technology venture investments in North America, Europe, China, and India totaled a record $8.4 billion. Cleantech Venture Capital firms include NTEC, Cleantech Ventures, and Foundation Capital. The preliminary 2008 total represents the seventh consecutive year of growth in venture investing, widely recognized as a leading indicator of overall investment patterns.[4] China is seen as a major growth market for cleantech investments currently, with a focus on renewable energy technologies.[5] In 2014, Israel, Finland and the US were leading the Global Cleantech Innovation Index, out of 40 countries assessed, while Russia and Greece were last.[6] With regards to private investments, the investment group Element 8 has received the 2014 CleanTech Achievement award from the CleanTech Alliance, a trade association focused on clean tech in the State of Washington, for its contribution in Whashington State's cleantech industry. [7]

According to the published research, the top clean technology sectors in 2008 were solar, biofuels, transportation, and wind. Solar accounted for almost 40% of total clean technology investment dollars in 2008, followed by biofuels at 11%.

The 2009 United Nations Climate Change Conference in Copenhagen, Denmark was expected to create a framework whereby limits would eventually be placed on greenhouse gas emissions. Many proponents of the cleantech industry hoped for an agreement to be established there to replace the Kyoto Protocol. As this treaty was expected, scholars had suggested a profound and inevitable shift from "business as usual."[8] However, the participating States failed to provide a global framework for clean technologies. The outburst of the 2008 economic crisis then hampered private investments in clean technologies, which were back at their 2007 level only in 2014. The 2015 United Nations Climate Change Conference in Paris is expected to achieve a universal agreement on climate, which would foster clean technologies development. [9]