Although legally the daughter of Henry Montague Hozier and Lady Blanche Hozier (a daughter of David Ogilvy, 10th Earl of Airlie), her paternity is a subject of much debate, as Lady Blanche was well known for infidelity. After Sir Henry found Lady Blanche with a lover in 1891, she managed to avert her husband's suit for divorce due to his own infidelities, and thereafter the couple separated. Lady Blanche maintained that Clementine's biological father was Capt. William George "Bay" Middleton, a noted horseman; Mary Soames, Clementine's youngest child, believed this.[1] However, Clementine's biographer, Joan Hardwick, has surmised (due in part to Sir Henry Hozier's reputed sterility) that all Lady Blanche's "Hozier" children were actually fathered by her sister's husband, Algernon Bertram Freeman-Mitford, 1st Baron Redesdale (1837–1916), better known as a grandfather of the famous Mitford sisters of the 1920s. Whatever her true paternity, Clementine is recorded as being the daughter of Lady Blanche and Sir Henry.

In the summer of 1899, when Clementine was fourteen, her mother relocated the family to Dieppe. There the family spent an idyllic summer; bathing, canoeing, picnicking, and blackberrying filled the happy days.[2] While in Dieppe the family became well acquainted with ‘La Colonie’, or the other English inhabitants living by the sea. This group consisted of military men, writers and painters, such as Aubrey Beardsley and Walter Sickert, the latter who came to be a great friend of the family. According to Clementine's daughter, Mary Soames, Clementine was deeply struck by Mr Sickert, and thought he was the most handsome and compelling man she had ever seen.[2] The Hoziers' happy life in France soon came to an end when Kitty, the eldest daughter, became ill with typhoid fever. Blanche Hozier decided that the best thing to do would be to send Clementine and her sister Nellie to Scotland, so she could devote her time completely to Kitty. Kitty died on 5 March 1900.

Clementine was educated first at home, then briefly at the Edinburgh school run by Karl Fröbel, the nephew of the famous German educationist, Friedrich Fröbel, and his wife Johanna[2] and later at Berkhamsted School for Girls (now Berkhamsted School) and at the Sorbonne in Paris. She was twice secretly engaged to Sir Sidney Peel, who had fallen in love with her when she was eighteen.[3] 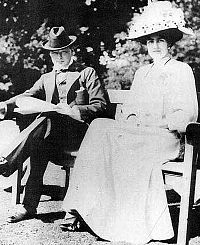 The courtship between Clementine and Winston Churchill was a short one. Having met four years earlier, they were re-acquainted during a dinner party in 1908. There was an instant attraction. On their first brief encounter Winston had recognised Clementine's beauty and distinction; now, after an evening spent in her company, he realised that here was a girl of lively intelligence and great character.[2] After months of correspondence, Winston wrote to Clementine's mother, Lady Blanche Hozier, requesting consent for their marriage.

On 12 September 1908, at St. Margaret's, Westminster, Clementine married Winston Churchill, more than a decade older and already a seasoned Parliamentarian.

After her marriage, during World War I, Clementine Churchill organised canteens for munitions workers on behalf of the Young Men's Christian Association (YMCA) in the North East Metropolitan Area of London, for which she was appointed a Commander of the Order of the British Empire (CBE) in 1918.[5]

In the 1930s, Clementine travelled without Winston aboard Lord Moyne's yacht, the Rosaura, to exotic islands: Borneo, Celebes, the Moluccas, New Caledonia, and the New Hebrides. During this trip, many believe that she had an affair with Terence Philip, a wealthy art dealer seven years her junior. (No one has ever provided conclusive evidence however; furthermore, Philip was believed by many to have been homosexual. Either way it was an affair that could not outlast the sultry clime, but it was meaningful to her.) She brought back from this trip a Bali dove. When it died, she buried it in her garden beneath a sundial. On the sundial's base, she had inscribed:

HERE LIES THE BALI DOVE
It does not do to wander
Too far from sober men.
But there’s an island yonder,
I think of it again.[6]

As the wife of a politician who often took controversial stands, Clementine was used to being snubbed and treated rudely by the wives of other politicians. However, she could take only so much. Travelling at one time with Lord Moyne and his guests, the party was listening to a BBC broadcast in which the speaker, a vehemently pro-appeasement politician, criticised Winston by name. Vera, Lady Broughton, a guest of Moyne, said "hear, hear" at the criticism of Churchill. Clementine waited for her host to offer a conciliatory word but, when none came, she stormed back to her cabin, wrote a note to Moyne, and packed her bags. Lady Broughton came and begged Clementine to stay, but she would accept no apologies for the insult to her husband. She went ashore and sailed for home the next morning.[7]

During World War II she was Chairman of the Red Cross Aid to Russia Fund, the President of the Young Women's Christian Association War Time Appeal and the Chairman of Fulmer Chase Maternity Hospital for Wives of Junior Officers. The Clementine Churchill Hospital in Harrow, Middlesex is named after her. 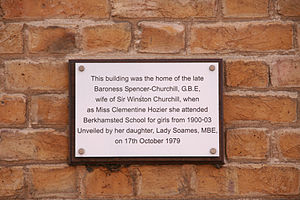 After more than 56 years of marriage, Clementine was widowed on 24 January 1965 when Winston died at the age of 90.

Following Sir Winston's death, on 17 May 1965, she was created a life peer as Baroness Spencer-Churchill, of Chartwell in the County of Kent.[9] She sat as a cross-bencher, but her growing deafness precluded her taking a regular part in parliamentary life.

In the final few years of her life, Lady Spencer-Churchill found that inflation and rising expenses made it difficult to make ends meet. In early 1977 she sent five paintings by her late husband to auction.[10] The sale went much better than expected, and rescued her from her financial difficulties.[citation needed] Only after her death was it discovered that she had destroyed the famous Graham Sutherland portrait of her husband because Winston had not liked it.

Lady Spencer-Churchill died at her London home, at 7 Princes Gate, Knightsbridge, of a heart attack on 12 December 1977. She was 92 years old and had outlived her husband by almost 13 years, as well as outliving three of her children.[11]

She is buried with her husband and children (with the exception of Marigold interred in Kensal Green Cemetery in London) at St Martin's Church, Bladon, near Woodstock in Oxfordshire.

A plaque on the Berkhamsted house where the young Clementine Hozier had lived during her education at Berkhamsted Girls' School was unveiled in 1979 by her youngest daughter, Baroness Soames.[12] A blue plaque also commemorates her residence there.[13]

Titles from birth to death