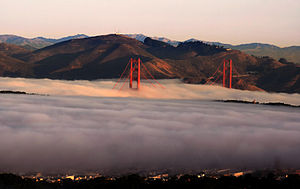 California's climate varies widely, from warm weather to subarctic climate depending on latitude, elevation, and proximity to the coast. Coastal regions, the Sierra Nevada foothills, and much of the Central Valley have a Mediterranean climate, with significantly warmer temperatures and less rainfall in the summer, more rainfall in the winter. The influence of the ocean generally moderates temperature extremes. The coastal climate has warm summers, mild or cool winters.

The large Westerly winds from the oceans also bring moisture, and the northern parts of the state generally receive higher annual rainfall amounts than the south. California's mountain ranges influence the climate as well: moisture-laden air from the west cools as it ascends the mountains, dropping moisture; some of the rainiest parts of the state are west-facing mountain slopes. Northwestern California has a temperate climate with rainfall of 15 inches (380 mm) to 50 inches (1,300 mm) per year. Some areas of Coast Redwood forest receive over 100 inches (2,500 mm) of precipitation per year.

The high mountains, including the Sierra Nevada, the Cascade Range, and the Klamath Mountains, have a mountain climate with snow in winter and mild to moderate heat in summer. Ski resorts at Lake Tahoe, Mammoth Lakes, and Mount Shasta routinely receive over 10 feet (3.0 m) of snow in a season, and some years, substantially more – leading, for example, to annual ski races on the Fourth of July.

On the east side of the mountains is a drier rain shadow. California's desert climate regions lie east of the high Sierra Nevada and Southern California's Transverse Ranges and Peninsular Ranges. The low deserts east of the southern California mountains, including the Imperial and Coachella valleys and the lower Colorado River, are part of the Sonoran Desert, with minimal frost in the winter; the higher elevation deserts of eastern California, including the Mojave Desert, Owens Valley, and the Modoc Plateau, are part of the Great Basin region, which has a more continental climate. During the summer months, especially from July through early September, the region is affected by the Mexican Monsoon (also called the "southwest monsoon"), which drives moisture from the tropical Pacific, Gulf of California, and/or Gulf of Mexico into the deserts, setting off brief, but often torrential thunderstorms, particularly over mountainous terrain.

Despite its long coastline, California is not vulnerable to tropical cyclones. Because of the cold California Current from the North Pacific Ocean and the fact that the storms tend to "steer" west, California has only been hit with two tropical storms in recorded history, a storm which came ashore in 1939 and dumped heavy rainfall on the Los Angeles Area and interior deserts and Tropical Storm Nora. The remnants of tropical systems will affect California more commonly, every several years.

The ENSO cycle has a huge effect on rainfall and snowfall patterns in California, especially during the winter and spring seasons. During the El Niño phase, the jet stream is located south through California, allowing for warmer temperatures and more heavy rains to occur, particularly in the southern portions of the state. During the La Niña phase, the jet stream is much further north, and therefore the far northern portions of California are wetter, while the southern half stays cool and dry. 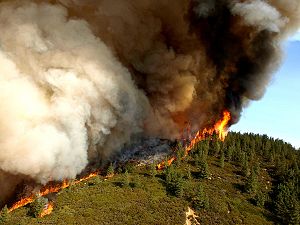 Active flame front of the Zaca Fire, the second largest fire on record in California

Summers in inland California can see temperatures well over 100 °F (38 °C) during the day and less than 0.3 in (7.6 mm) of monthly rainfall, particularly in the southern areas. This makes them prone to wildfires. These can be life-threatening and cause evacuation. Wildfires are less common along the coast because of the cooler, more humid summers, but can occur in autumn when the marine layer is less common, making temperatures warmer and humidity drop significantly.

The following are terms used to describe local or regional weather events.