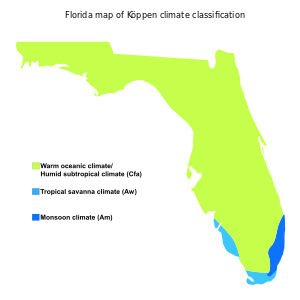 The climate of the north and central parts of the US state of Florida is humid subtropical. South Florida has a tropical savanna climate.[1] There is a defined rainy season from May through October, when air mass thundershowers that build in the heat of the day drop heavy but brief summer rainfall. Late summer and early fall bring decaying tropical lows (and occasionally landfalling tropical cyclones) that contribute to late summer and early fall rains.

In October the dry season sets in across much of Florida and lasts until late April in most years. Fronts regularly sweep through the northern and central parts of the state which bring winter rainfall, but winter is often quite dry and sunny in much of Florida. Towards the end of the dry season in the spring, brush fires may become common statewide. In some years the dry season becomes quite severe in Florida and water restrictions are imposed to conserve water. While most areas of Florida do not experience any type of frozen precipitation, north Florida can see fleeting snow or sleet a few times each decade.

The Gulf Stream running through the Florida Straits and then north off the Florida East Coast keeps temperatures moderate a few miles inland from around Stuart on the east coast to Ft. Myers on the west side of the state year round, with few extremes in temperature.

Over the winter prevailing winds are out of the north across the panhandle south to near Orlando, but are variable in the rest of the state. The summer season sees generally east and southeast winds across the peninsula. During the summer months, the average wind pattern implies a surface ridge axis which normally lies across central Florida, with easterly winds from Tampa southward and southwest winds across northern Florida. The peak wind gust during the 1930 through 1997 period was 115 mph (100 knots) at Miami International Airport during Hurricane Andrew.[4]

In July the trade winds south of the northward-moving subtropical ridge expand northwestward into Florida. On occasion, dust from the Sahara moving around the southern periphery of the ridge moves into the state, suppressing rainfall and changing the sky from a blue to a white appearance and leads to an increase in red sunsets. Its presence negatively impacts air quality across the Southeastern United States during the summer, by adding to the count of airborne particulates. This is in sharp contrast to the normally clean air over Florida and the southeastern USA, which on average is the cleanest air in the USA.[5] Over 50% of the African dust that reaches the United States affects Florida.[6] Since 1970, dust outbreaks have worsened due to periods of drought in Africa. There is a large variability in the dust transport to the Caribbean and Florida from year to year.[7] Dust events are possibly linked to a decline in the health of coral reefs across the Caribbean and Florida, primarily since the 1970s.[8] 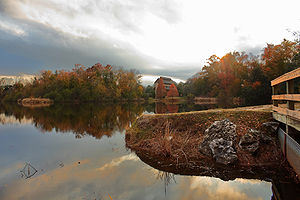 On average, Florida has some of the mildest winters in the United States. Average lows range from 65 °F (18 °C) in Key West to near 41 °F (5 °C) degrees Fahrenheit at Tallahassee, whereas daytime highs range from 64 °F (18 °C) at Tallahassee to 77 °F (25 °C) at Miami.[9][10] Predominant easterly winds across southern Florida keep temperatures moderate during the winter, as the nearby Gulf Stream modifies cooler air moving in from the northeast. The Gulf Stream is of little effect, however, when strong cold fronts move southward down the peninsula and freezing temperatures are not unusual in the inland areas of South Florida with even Miami experiencing occasional temperatures in the thirties (F). El Niño winters tend to be cooler due to increased cloud cover, but tend to have fewer freezes.[11] 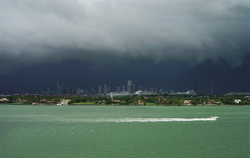 Like the remainder of the Southeastern United States, Florida has a winter maximum in dense fog conditions. Unlike the remainder of the region, the maximum in Florida contains roughly half of the annual occurrences per year, on average. Its summer minimum is less than the remainder of the Southeast. The annual number of heavy fog days (with visibility of .25 miles (0.40 km) or less) has ranged from 50 in Tallahassee, to 1 in Key West, the least foggy region in the state. The two types of fog that are most common in Florida are advection and radiational. Fog can be hazardous to early morning commuters. On January 9, 2008, when fog on Interstate 4 combined with smoke from a nearby fire, visibility was reduced to nearly zero. As a result, five individuals died in a 70-car pileup.[14][15]

Statewide, the highest rainfall amounts occur during the summer months. In northern Florida, there is a weak winter secondary maximum while statewide the driest months of the year are during the spring.[13] During El Niño, Florida sees greater rainfall between November and March.[11] Due to the lack of the secondary maximum across the peninsula, a distinct dry season is seen in the averages from winter through spring. This dry season provokes brush fires annually as temperatures rise during the late spring, before they fade during early June as the rainy season gets underway. 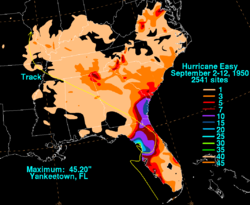 The heaviest rainfall to occur in 24 hours was measured in Yankeetown during Hurricane Easy (1950), 38.70 inches (98.3 cm). This is also the highest known point storm total maximum related to any tropical cyclone which has impacted Florida,[16] and by itself would be the highest known rainfall total for any month from any location within Florida. This rainfall amount remained the national 24-hour rainfall record until Tropical Storm Claudette (1979).[17] Heavy rainfall events have fallen due to stalled fronts near the state as well, and occur during the March through May and October through November timeframe.

A statewide drought began in November 2005, one month after Hurricane Wilma's passage through the state, and persisted until 2009.[23] The previous significant drought occurred in 2000, which was the state's driest year on record.[24] 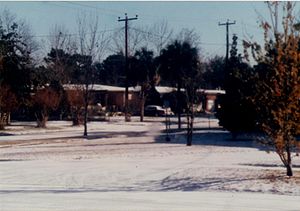 The state record for snowfall is 5 inches (13 cm), set in northern Florida during January 1800.[27] The earliest in the season that frozen precipitation has fallen was during the Late November 2006 Nor'easter on November 21 across central Florida.[28] The latest in the season that snow or sleet has fallen was on April 8, 2007. A trace of snowfall has been recorded as far south as Homestead, mainly during a January 19, 1977 event.[29]

Florida reports more thunderstorms than any other US state. Some places report in excess of 90 thunderstorm days per year, making Florida one of the most thundery regions outside of the tropics. Florida receives the highest density of lightning strikes within the United States. Several deaths per year are blamed on lightning, making lightning one of the deadliest weather-related phenomenon in the state. However, since 1992, the number of lightning deaths has been slowly dropping despite a rising population, suggesting that lightning awareness programs are effective. The most likely targets of lightning strikes are construction workers and others who work outside, though 12 percent of the cases occurred indoors to people using electronic devices. Severe thunderstorms can sometimes produce hail, very strong straight line winds and tornadoes. Very heavy rainfall from thunderstorms can result in flash flooding. Thunderstorms occur most often during the summer but can occur at any time of the year.[30]

There are more tornadoes per square mile in Florida than any other state.[31][32] However, these tornadoes tend to be much weaker and short-lived than in other states like the Midwest or Great Plains. Strong tornadoes do occasionally form in Florida, usually in conjunctions with a cold frontal passage in the winter or spring. A total of 42 people died in February 1998 from the deadliest such tornado outbreak in Central Florida, which occurred during the nighttime hours.[33]

While tornadoes in the Midwest are more severe, a higher rate of deaths are experienced in Florida, and Brevard County, specifically, due to higher population density and quantity of manufactured homes.[34] 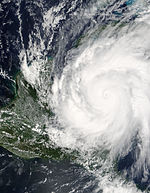 The earliest in the year a tropical cyclone has struck the sunshine state was the Groundhog Day Tropical Storm in 1952. The latest impact was from a hurricane which struck near Tampa on December 1, 1925. The strongest hurricane to strike Florida was the Labor Day Hurricane of 1935. Hurricane Easy in 1950 produced the wettest known point total from any tropical cyclone.[16] The record number of hurricane strikes on the state in one season is four in 2004.[35] Hurricanes typically spawn tornadoes within their northeast quadrant.[36]

Tropical cyclones have affected Florida in every month of the year but January and March. Nearly one-third of the cyclones affected the state in September, and nearly three-fourths of the storms affected the state between August and October, which coincides with the peak of the hurricane season. Portions of the coastline have the lowest return period, or the frequency at which a certain intensity or category of hurricane can be expected within 86 mi (139 km) of a given location, in the country. Monroe County was struck by 26 hurricanes since 1926, which is the greatest total for any county in the United States.[37]

El Niño has the following effects on Florida climate: above average rainfall in the spring.[21]This is followed by wildfire threat when rain dries up. Northern Florida is more susceptible to severe weather; below normal temperatures, increased number of low pressure systems in the Gulf of Mexico during the winter, and "almost always" reduces the frequency of storms and hurricanes.[38]

La Niña has the following effects: often dry conditions prevail in late fall, winter and early spring, increased risk of wildfires in spring and summer months, the temperatures average slightly above normal, and the chance of hurricane activity increases substantially.[38]

Long term forecasts are made based on these effects. However, they are easily overridden, in winter, by the Arctic oscillation and North Atlantic oscillations, which can only be predicted about two weeks in advance.[39] These can drop the temperature noticeably from seasonal norms.

The climate regime for much of the state is humid subtropical (Köppen Cfa), though portions of the Gold Coast of southeast Florida, as well as all of the Florida Keys, qualify as tropical wet-and-dry (Köppen Aw).