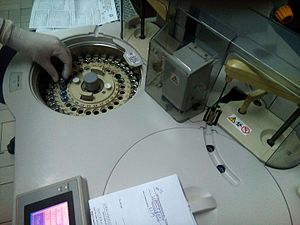 The discipline originated in the late 19th century with the use of simple chemical tests for various components of blood and urine. Subsequent to this, other techniques were applied including the use and measurement of enzyme activities, spectrophotometry, electrophoresis, and immunoassay.

Most current laboratories are now highly automated to accommodate the high workload typical of a hospital laboratory. Tests performed are closely monitored and quality controlled.

All biochemical tests come under chemical pathology. These are performed on any kind of body fluid, but mostly on serum or plasma. Serum is the yellow watery part of blood that is left after blood has been allowed to clot and all blood cells have been removed. This is most easily done by centrifugation, which packs the denser blood cells and platelets to the bottom of the centrifuge tube, leaving the liquid serum fraction resting above the packed cells. This initial step before analysis has recently been included in instruments that operate on the "integrated system" principle. Plasma is in essence the same as serum, but is obtained by centrifuging the blood without clotting. Plasma is obtained by centrifugation before clotting occurs. The type of test required dictates what type of sample is used.

A large medical laboratory will accept samples for up to about 700 different kinds of tests. Even the largest of laboratories rarely do all these tests themselves, and some must be referred to other labs.

This large array of tests can be further sub-categorised into sub-specialities of:

A set of commonly ordered tests are combined into a panel: