The Close Combat Clasp (German: Nahkampfspange) is a German military award instituted on 25 November 1942 for achievement in hand-to-hand fighting in close quarters. The Close Combat Clasp was worn above the upper left uniform pocket. The clasp was die-cast and made of either tombac or later zinc, with a slightly curved centerpiece consisting of the national emblem surmounting a crossed bayonet and hand grenade.

The award was bestowed in three classes:

In order to receive this distinguished decoration, all battles and their dates had to be officially documented by the battle commander, verified by the general in charge and authenticated by several divisions of the war department. It was possible that more than one close combat battle per day was fought and therefore recorded as a separate entity.

An exemption was made if the soldier was wounded in battle so badly that his injuries precluded a return to the front. In such a case, the criteria were reduced to 10, 20 and 40 battles. The highest number of battles in combat recorded is listed at 84 by SS-Hauptscharführer Hermann Maringgele.[2]

The Gold Close Combat Clasp was often regarded in higher esteem than the Knight's Cross of the Iron Cross by the German infantry. Of the roughly 18–20 million soldiers of the German Wehrmacht and Waffen-SS, 36,400 received the Bronze Class, 9,500 the Silver Class and 631 the Gold Class.[1]

In 1944 a version for the German Air Force was created to note the increasing number of Air Force personnel and paratroopers taking part in direct combat.[3] 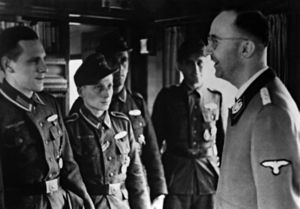 The decoration was designed by the military artist Wilhelm Ernst Peekhaus. The reverse of many of the awards features FEC.W.E.Peekhaus Berlin where FEC short for the Latin word "Fecit" meaning made by, followed by W.E.Peekhaus and Berlin. On the right side the manufacturer's logo or name. The badge was die-cast and made mainly of zinc. Depending on the manufacturer the clasp is either straight or slightly curved and measures between 95mm to 97mm wide. Towards the war's end production quality fell and these badges often use poorer quality metals and workmanship than earlier produced pieces.

The design features a central motif consisting of the national emblem of eagle and swastika surmounting a crossed bayonet and stick grenade. The centerpiece was cut out and backed with a thin, flat square steel, crimped in place on the reverse. The gold and silver awards were often plated in the same metal, whilst the bronze badge was lacquered with a composition called brennlack, which was a powdered metal. When oven heated the paint was burned, leaving a metallic type coating that will flake off with time. The pins are normally wider in the center, tapering at the ends. The weight could be anything between 24 and 37 grams depending on the metal used.[4]

Due to the manufacturing process it is sometimes difficult to identify the exact class of some awards. This has been caused by chemical discoloration between the zinc base metal of the clasp and whatever process was used to apply the original colour wash.

Awards of the gold clasp were usually awarded in person by Hitler, Himmler or other high ranking officials.

The character of Major von Hapen (Derren Nesbitt) in the 1969 film Where Eagles Dare is shown wearing the decoration in gold. How a Gestapo officer would have qualified for such a rare combat decoration is left unstated.

Oberfeldwebel (Senior Sergeant) Steiner (James Coburn) has the Gold Clasp in the 1977 film Cross of Iron.