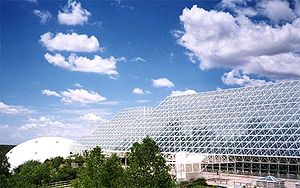 Closed ecological systems (CES) are ecosystems that do not rely on matter exchange with any part outside the system.

The term is most often used to describe small manmade ecosystems. Such systems are scientifically interesting and can potentially serve as a life support system during space flights, in space stations or space habitats.[1]

In a closed ecological system, any waste products produced by one species must be used by at least one other species. If the purpose is to maintain a life form, such as a mouse or a human, waste products such as carbon dioxide, feces and urine must eventually be converted into oxygen, food, and water.

An ecosphere is a glass enclosed, self-contained and self-sustaining closed ecosystem sold primarily as a gift or experiment. It can include tiny shrimp, algae, gravel, decorative shells, and gorgonia.[4]

Also bottle gardens can act as a closed ecological system.

The 1993 novel This Other Eden by Ben Elton featured the development of "claustrospheres" which were closed ecological systems contained within a dome in which people could take refuge in the event of environmental collapse.

The critically panned 1996 comedy film Bio-Dome involved the protagonists becoming trapped in a closed ecological system being run as an experiment.