listen)); is a county (județ) of Romania, in Transylvania, with the capital city at Cluj-Napoca.

In Hungarian, it is known as Kolozs megye, and in German as Kreis Klausenburg. During Austro-Hungarian administration, before 1918, there was a county with similar name (see: Kolozs County).

At the 2011 census, the ethnic composition was as follows:[5]

Cluj County lies in the northwestern half of the country, between parallels 47°28' in north and 46°24' in south, meridians 23°39' in west and 24°13' in east, respectively. It covers an area of 6,674 km2 unfolded in the contact zone of three representative natural units: Apuseni Mountains, Someș Plateau and Transylvanian Plain. Cluj County is the 12th largest in the country and occupies 2.8% of Romania's area. It is bordered to the northeast with Maramureș and Bistrița-Năsăud counties, to the east with Mureș County, to the south with Alba County, and to the west with Bihor and Sălaj counties. 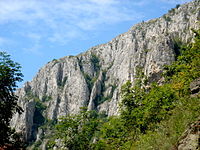 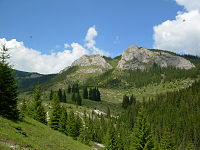 The relief is rugged, constituted mostly of hilly units belonging to Someș Plateau and, to a lesser extent, of mountain portions that represent the northeastern part of Apuseni Mountains. Fields are missing on the territory of Cluj County, being replaced, as step of relief, by well developed terraces and floodplains in the lower sectors of Someșul Mic and Arieș rivers. The hilly area, extended in the central northern and southern part of the county, include several subunits of Someș Plateau (Cluj, Feleacu, Dej hills), among which are individualized numerous depressions (Apahida, Bonțida, Gilău, Dej, Turda, Câmpia Turzii) at the edge of which there are some contact depressions (Huedin and Iara), at the limit of the mountain. The mountain sector, located in southwest, belongs to Apuseni, mountains group of Western Carpathians, represented by sectors of Vlădeasa Massif (peak Vlădeasa – 1,836 m), Gilău Mountains and Muntele Mare, as well as narrow portions of Trascău, Plopiș, Meseș and Bihor mountains. In the eastern part of Cluj County, east of the river alignment Valea Florilor–Maraloiu–Someșul Mic, is located a part of the Hilly Plain of Transylvania, special unit of relief, with mountainous character, partially overlapped by some gas-condensate domes.

The hydrographic network is represented by rivers (Someșul Mic with SW–NE direction, whose catchment area is fully developed on the territory of Cluj County, Crișul Repede and lower Arieș),[6] natural lakes and ponds (Cătina Popii I and II, Geaca, Țaga, etc.) and lakes of hydropower interest (Beliș-Fântânele, Tarnița and Gilău). In the northeastern part of Cluj County, Someșul Mic joins Someșul Mare, upstream of Dej, forming Someș River, which flows into the Tisza to the west.

Through its location, Cluj County benefits from a moderate continental climate.[7] In the mountain sector (Vlădeasa Massif and Muntele Mare), mean annual air temperature is 2 °C, and in the rest of the territory is 6 °C. Annual thermal amplitudes have values between 17–19 °C in the mountains and grow at 23–25 °C in hilly areas, plateaus and plains.

Rainfall is distributed unevenly, with minimal amounts in Turda–Câmpia Turzii (about 550 mm) and maximum in Vlădeasa Massif (about 1,400 mm). On average, annual values of rainfall reach 600–650 mm in the Transylvania Plain, 650–700 mm in the Someș Plateau and over 900–1000 mm in mountainous areas.[7]

Access tunnel in Turda salt mine. The geological reserve is estimated at 38,750 million tonnes of salt.[8]

Cluj County has rich and varied natural resources. Iron ores came into use in 1962, by exploitations in Căpușu Mic and Băișoara, being conducted over the years a series of geological explorations in Vlaha, Săvădisla and Cacova Ierii. Fossil fuels are represented by brown coal exploited in Ticu–Dâncu–Băgara area and peat, exploited in Călățele–Căpățâna sector. Likewise, there is a gas-condensed dome in Puini in the Transylvanian Plain.

The vegetation is heterogeneous and storeyed due to the prevalence of hilly and mountainous relief. In Cluj County can be met a wide range of plant formations. Sub-alpine floor, present in Vlădeasa Massif and Muntele Mare, is characterized by lawns with midget grasses and juniper bushes. The spruce forests floor, expanded on mountain slopes between 1,000–1,600 m, consists predominantly of spruce mixed with fir, and the deciduous forests floor develops on all forms of relief, ranging from 400–1,000 m, and consists of sessile forests mixed with beech, hornbeam or elm. On slopes with northern exposure of Luna and Lujerdiu valleys develop compact clusters of sessile, hornbeam, ash and elm forests. In the Hilly Plain of Transylvania appear islands of steppe, alternating with patches of forests.

The fauna is adapted to vegetation flooring, but less constant to its limits, due to great mobility; it is rich in species. In forests are present numerous animals of cynegetic interest, including deer, stag, bear, fox, lynx, wild boar, squirrel, and on Someș Valley naturally entered the muskrat. Around artificial lakes live a series of birds (duck, coot, stork), in the Someș Plateau and Transylvanian Plain was colonized the pheasant, and in Turda Gorge area lives the rock eagle. Mountain rivers are populated with trouts, graylings and nases, and in the lower ones with barbel and chub.

Cluj has, after Bucharest, the largest number of companies in the country (over 32,000 firms in 2014) and ranks third after net average earning, with 1,890 lei in December 2013 (Bucharest has 2,474 lei, and Ilfov 2,138 lei);[11] it is almost 5% higher than the national average. Great investors in automotive industry, but also in IT have increased the average salary of employees, but these wage increases have led to an increase in the cost of living, reflected, for example, through higher rents than in surrounding counties. In Cluj companies work over 150,000 people, and after their turnover, the county ranks fifth in the Romanian business hierarchy, with €8 billion in 2012,[11] after Bucharest (€81.9 billion), Ilfov (€13.6 billion), Argeș (€9.1 billion) and Timiș (€8.7 billion). The number of registered unemployed at the end of June 2014 was 9,744 people, and the unemployment rate, calculated on the working population, is 2.8%, being 0.6% lower than the unemployment rate in June 2013.

Cluj County is the county with the most industrial parks in the country. Five such functional areas and another in preparation already attracted investment of over half a billion euros and led to the creation of over 5,000 jobs.[12] 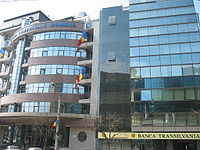 In June 2014 industrial production increased by 19.6% over the same month in 2013, according to data released by the County Directorate of Statistics.[13] Compared with the first half of 2013, between 1 January and 30 June 2014 the industrial production index was 122.3%. The turnover value index in industry in June 2014 was 11.7% higher than in June 2013.[13] Cumulated six months, the turnover value index is 112.5% compared to the same period in 2013.[13] The largest new investment in the domain were carried out in public industrial parks (Tetarom II and III, with Emerson in Muncii Blvd. and Bosch and De'Longhi in Jucu) or private ones in Dej and Câmpia Turzii.

Therewith, industry in Cluj County is characterized by a strong potential for processing both local resources and those attracted. Within processing industry are represented most existing branches nationwide. Over 24% of the employed population is working in different industrial sub-branches.[14] Likewise, an important sector of Cluj County economy is the IT sector and that related to customer service – services of sales, marketing, services of IT helpdesk, technical support, that record an annual increase of over 30% in the number of employees. The industrial production in the county is intended to cover the domestic demand and supply to foreign partners. Among processing industries, those with the highest share in industrial production are non-ferrous metal industry (17.9%), food and beverage industry (17.5%), metallurgic industry (12.9%), chemicals and man-made fibers industry (8.1%), cellulose, paper and cardboard industry (8%).[15]

Concerning agriculture and silviculture, varying climatic conditions of the area have created a favorable environment for the development of agriculture, this being the second branch, as share and importance, in the economy of the county. An important role in this economic sector holds zootechnics, but crop production has also a significant share. Both vegetal and animal sector go through a period of transition characterized by reduced production from year to year, a situation that requires the adoption of measures to stimulate the recovery of agriculture. The importance of agriculture lies in the existence of the University of Agricultural Sciences and Veterinary Medicine that annually licenses more than 2,000 graduates, specialists in all fields of agriculture.

File:Cluj Train Station.jpg
Cluj-Napoca train station is one of the largest and throughput in northwestern Romania.

At county level, double railway lines have a share of 70%, being the highest in Nord-Vest development region, and the degree of electrification is over 50% of existing railway lines.[16] Regarding the transportation of goods, receiving stations at county level occupy leading positions at regional level: Dej, Câmpia Turzii, Turda, Aghireșu, Gherla and Cluj-Napoca. The length of railways that cross the county is 240 km, of which 129 km electrified line.[16] Through Câmpia Turzii, Cluj-Napoca and Huedin passes CFR Line 300 Bucharest–Oradea that links with the countries of Central and Western Europe. One of the major railway junctions of the country is Dej, being connected with important centers in the northern part of the country on routes: Dej–Baia Mare–Satu Mare, Dej–Beclean–Ilva Mică, Dej–Salva–Sighetu Marmației, Dej–Beclean–Deda.

A3 motorway, also known as Transylvania Motorway, near Turda

In 2010, Cluj County recorded a road network density of 0.4 km of road/km2.[16] This level places Cluj above the national average (0.33 km of road/km2). Cluj County has a dense network of public roads, in total length of 2,699 km, of which 502 km are national roads.[16] Out of total, 698 km are modernized roads, in majority portions of roads of national and international interest. Inland, connections are provided by 2,197 km of county and communal roads, of which 255 km are modernized, and 720 km are covered with light road surfaces. In December 2009 were opened the first 42 km of A3 motorway, between Turda and Cluj West, and in November 2010, another 12 km between Turda and Câmpia Turzii. Were put into use bypasses for Cluj-Napoca, Apahida and Gherla. Likewise, were also modernized several mountain and forest roads.

Avram Iancu International Airport, is the second largest airport in Romania, handling 1,182,047 passengers in 2014.[17] The airport is located in Someșeni and serves Cluj-Napoca. It operates passenger flights and international cargo flights. The airport has been continuously expanded and modernized. The new terminal built in 2009, with a capacity of 1.5 million passengers per year, is intended for both domestic flights and foreign ones. The terminal has international standard facilities. 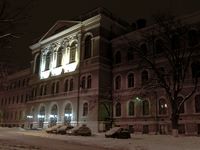 With more than 41,000 students in 2014, Babeș-Bolyai University is the largest university in the country.[18] 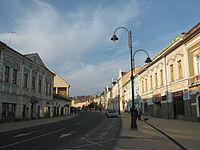 With a population of more than 47,000 inhabitants, Turda is the second largest city in Cluj County.