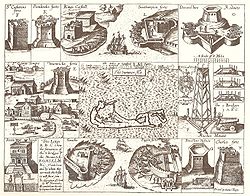 The Castle Islands Fortifications, in Bermuda. Construction beginning in 1612, these were the first stone fortifications, with the first coastal artillery batteries, built by England in the New World. 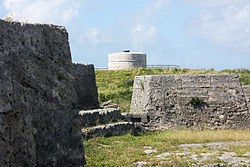 The effect of thirty years evolution in the design of coastal fortifications, between the 1790s and 1822, can be discerned between Ferry Island Fort (in the foreground), with multiple guns arrayed to cover the water westward, and the Martello tower in the background, which used a single gun with 360° traverse to cover all of the surrounding area. Ferry Reach, Bermuda, 2011.
File:Suomenlinna gun 5.jpg
19th-century coastal artillery guns preserved in Suomenlinna fortress in Helsinki.
File:Columbiad 10-inch Model 1840 Side View.jpg
50-pounder Model 1811 Columbiad (7.25 inch or 184 mm bore) and center-pivot mounting designed by George Bomford as an experimental coastal defense gun. This gun was built in 1811 as a component of the Second System of US fortifications. 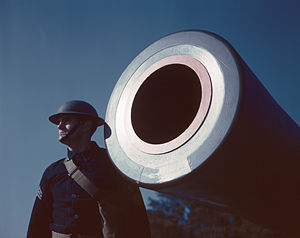 Coastal artillery is the branch of armed forces concerned with operating anti-ship artillery or fixed gun batteries in coastal fortifications.[1]

From the Middle Ages until World War II, coastal artillery and naval artillery in the form of cannon were highly important to military affairs and generally represented the areas of highest technology and capital cost among materiel. The advent of 20th-century technologies, especially military aviation, naval aviation, jet aircraft, and guided missiles, reduced the primacy of cannon, battleships, and coastal artillery. In countries where coastal artillery has not been disbanded, these forces have acquired amphibious capabilities. In littoral warfare, mobile coastal artillery armed with surface-to-surface missiles still can be used to deny the use of sea lanes.

It was long held as a rule of thumb that one shore-based gun equaled three naval guns of the same caliber, due to the steadiness of the coastal gun which allowed for significantly higher accuracy than their sea-mounted counterparts. Land-based guns also benefited in most cases from the additional protection of walls or earth mounds.

One of the first registered uses of coastal artillery was in 1381—during the war between Ferdinand I of Portugal and Henry II of Castile—when the troops of the King of Portugal used cannons to defend Lisbon against an attack from the Castilian naval fleet.

The use of coastal artillery expanded during the Age of Discoveries, in the 16th century; when a colonial power took over an overseas territory, one of their first tasks was to build a coastal fortress, both to deter rival naval powers and to subjugate the natives. The Martello tower is an excellent example of a widely used coastal fort which mounted defensive artillery, in this case muzzle-loading cannon. During the 19th century China also built hundreds of coastal fortresses in an attempt to counter Western naval threats.

Coastal artillery could be part of the Navy (as in Scandinavian countries, war-time Germany, and the Soviet Union), or part of the Army (as in Anglophone countries). In the United Kingdom, in the later 19th and earlier 20th Centuries, coastal artillery was the responsibility of the Royal Garrison Artillery.

In the United States, coastal artillery was established in 1794 as a branch of the Army and a series of construction programs of coastal defenses began: the "First System" in 1794, the "Second System" in 1804, and the "Third System" or "Permanent System" in 1816. Then, following the Spanish–American War and the report of the Endicott Board, U.S. harbor defenses were greatly strengthened and provided with new, rifled artillery and minefield defenses. Shortly thereafter, in 1907, Congress split the field artillery and coast artillery into two separate branches, and created a separate Coast Artillery Corps (CAC).[2]

The first decade of the 20th Century, the United States Marine Corps established the Advanced Base Force. The force was used for setting up and defending advanced bases, and its close ties to the Navy allowed it to man coast artillery around these bases. 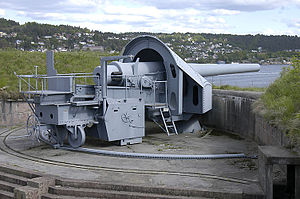 One of the three 28 cm main battery guns at Oscarsborg

During the Battle of Drøbak Sound in April 1940, the German navy lost the new heavy cruiser Blücher, one of their most modern ships, to a combination of fire from various coastal artillery emplacements, including two obsolete German-made Krupp 280 mm (11 in) guns and equally obsolete Whitehead torpedos. The Blücher had entered the narrow waters of the Oslofjord, carrying 1,000 soldiers and leading a German invasion fleet. The first salvo from the Norwegian defenders, fired from Oscarsborg Fortress about 1 mile (1,600 meters) distant, disabled Blücher's main battery and set her afire.

Fire from the smaller guns (57 mm to 150 mm) swept her decks and disabled her steering, and she received several torpedo hits before the fires reached her magazines and doomed her. As a result, the remainder of the invasion fleet reversed, the Norwegian royal family, parliament and cabinet escaped, and the Norwegian gold reserves were safely removed from the city before it fell.

In December 1941, during the Battle of Wake Island, US Marines fired at the Japanese invasion fleet with their six 5-inch (127 mm) guns, sinking the Japanese destroyer Hayate by scoring direct hits on her magazines, and scoring eleven hits on the light cruiser Yubari, forcing her to withdraw, and temporarily repulsing Japanese efforts to take the island.

Singapore was defended by its famous large-caliber coastal guns, which included one battery of three 15-inch (381 mm) guns and one with two 15-inch (381 mm) guns. Prime Minister Winston Churchill nicknamed the garrison as "The Gibraltar of the East" and the "Lion of the Sea".The coastal guns were supplied mostly with armour-piercing (AP) shells and few high explosive (HE) shells. AP shells were designed to penetrate the hulls of heavily armoured warships and were ineffective against personnel.

The Japanese attacked Singapore from Malaya in December 1941, and despite the common rumour that the 15-inch guns were unable to turn north and could only face south and fire upon enemy ships, most of them could turn northwards and they fired at the Imperial Japanese Army invaders. Military analysts[who?] later estimated that if the guns had been well supplied with HE shells, the Japanese attackers would have suffered heavy casualties, but the invasion would not have been prevented by this means alone.

The Japanese defended the island of Betio in the Tarawa atoll with numerous 203 mm (8-inch) coastal guns. In 1943, these were knocked out early in the battle with a combined USN naval and aerial bombardment.

Nazi Germany fortified its conquered territories with the Atlantic Wall. Organization Todt built a string of reinforced concrete pillboxes along the beaches, or sometimes slightly inland, to house machine guns, antitank guns, artillery ranging in size up to the large 38 cm naval guns. The intent was to destroy the Allied landing craft before they could unload. During the Normandy Landings in 1944, shore bombardment was given a high importance, using ships from battleships to destroyers and landing craft. For example, the Canadians at Juno beach had fire support many times greater than they had had for the Dieppe Raid in 1942.

The old battleships HMS Ramillies and Warspite and the monitor HMS Roberts were used to suppress shore batteries east of the Orne; cruisers targeted shore batteries at Ver-sur-Mer and Moulineaux; eleven destroyers for local fire support. In addition, there were modified landing-craft: eight "Landing Craft Gun", each with two 4.7-inch guns; four "Landing Craft Support" with automatic cannon; eight Landing Craft Tank (Rocket), each with a single salvo of 1,100 5-inch rockets; eight Landing Craft Assault (Hedgerow), each with twenty-four bombs intended to detonate beach mines prematurely. Twenty-four Landing Craft Tank carried Priest self-propelled howitzers which also fired while they were on the run-in to the beach. Similar arrangements existed at other beaches.

File:USS Texas-11.jpg
240mm shells from Battery Hamburg straddle the Texas during the Bombardment of Cherbourg.

On June 25, 1944 the U.S. battleship Texas engaged German shore batteries on the Cotentin Peninsula. Battery Hamburg straddled the ship with a salvo 240mm shells, eventually hitting the Texas twice; one shell damaging the conning tower and navigation bridge and the other penetrating below decks but failing to explode. Return fire from the Texas knocked out the German battery.

Allied efforts to take the port of Toulon in August 1944 ran into "Big Willie", a battery consisting of two prewar French turrets, equipped with the guns taken from the French battleship Provence, each mounting a pair of 340 mm naval guns. The range and power of these guns was such that the Allies dedicated a battleship or heavy cruiser to shelling the fort every day, with the battleship USS Nevada eventually silencing the guns on August 23, 1944.[3][4]

After World War II the advent of jet aircraft and guided missiles reduced the role of coastal artillery in defending a country against air and sea attacks while also rendering fixed artillery emplacements vulnerable to enemy strikes.