From Infogalactic: the planetary knowledge core
(Redirected from Coccoliths)
Jump to: navigation, search 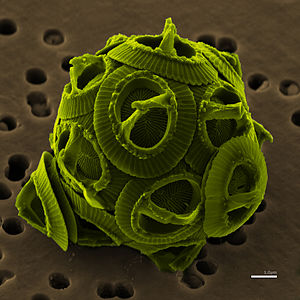 Coccoliths are individual plates of calcium carbonate formed by coccolithophores (single-celled algae such as Emiliania huxleyi) which are arranged around them in a coccosphere.

Coccoliths are formed within the cell in vesicles derived from the golgi body. When the coccolith is complete these vesicles fuse with the cell wall and the coccolith is exocytosed and incorporated in the coccosphere. The coccoliths are either dispersed following death and breakup of the coccosphere, or are shed continually by some species. They sink through the water column to form an important part of the deep-sea sediments (depending on the water depth). Thomas Huxley was the first person to observe these forms in modern marine sediments and he gave them the name 'coccoliths' in a report published in 1858. Coccoliths are composed of calcium carbonate as the mineral calcite and are the main constituent of chalk deposits such as the white cliffs of Dover (deposited in Cretaceous times), in which they were first described by Henry Clifton Sorby in 1861. 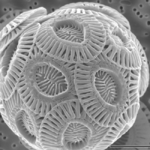 Coccoliths are also classified depending on shape. Common shapes include:[1][2]

Although coccoliths are remarkably elaborate structures whose formation is a complex product of cellular processes, their function is unclear. Hypotheses include defence against grazing by zooplankton or infection by bacteria or viruses; maintenance of buoyancy; release of carbon dioxide for photosynthesis; to filter out harmful UV light; or in deep-dwelling species, to concentrate light for photosynthesis.

Because coccoliths are formed of low-Mg calcite, the most stable form of calcium carbonate, they are readily fossilised. They are found in sediments together with similar microfossils of uncertain affinities (nannoliths) from the Triassic to recent. Coccoliths and related fossils are referred to as calcareous nannofossils or calcareous nannoplankton.