Colchester Garrison is a major garrison located in Colchester in the county of Essex, Southern England. It has been an important military base since the Roman era. The first permanent military garrison in Colchester was established by Legio XX Valeria Victrix in 43AD following the Roman conquest of Britain. Colchester was an important garrison town during the Napoleonic Wars and throughout the Victorian era. During the First World War several battalions of Kitchener's Army were trained there. Now, 2nd Battalion and 3rd Battalion of The Parachute Regiment are based there. Today there are new barracks, which, in replacing the Victorian buildings, have made available building land slightly nearer the town centre.

Colchester Garrison played an eminent role during the Napoleonic Wars. The troops were originally billeted in local inns and houses. After petitioning from the borough council, new infantry barracks were built in 1794. By 1800 additional infantry, artillery, and cavalry barracks had been built in the area bounded by Barrack Street to the north, Wimpole Road to the west, and Port Lane to the east. In 1805 the barracks were home to 7,000 officers and men. After the Napoleonic Wars the barracks were reduced. The sale of the older barracks and the freehold site on which they stood started in 1817 and was completed in 1840. The Army retained 14 acres (57,000 m2) and an infantry barracks for 851 officers and men. Much of the old barracks land was developed as the "New Town" area of Colchester during the Victorian era.[1]

Colchester Garrison experienced rapid expansion during the Crimean War. Between 1855 and 1856 wooden infantry barracks for 5,000 troops were erected on Ordnance Field. The government purchased 167-acre (0.68 km2) Middlewick Farm for use as a training area and a rifle range in 1857. Middlewick Ranges are still in use by the present garrison.[1]

In 1856 10,000 troops of the British German Legion were billeted in the infantry barracks and in tented encampments on Barrack Field.[1] The British German Legion was raised in 1854 as a foreign corps in British service (similar to the Kings German Legion during the Napoleonic Wars). The Legion was raised for service in the Crimean War, under the provisions of the Enlistment of Foreigners Act 1854.[2] The Legion did not see active service although a large number of legionaries went to the Crimea where they mostly died of fever without seeing the battlefields. The Legion was disbanded in Colchester in 1857, but the majority of the remaining personnel went to the Eastern Cape as part of the Kaffraria Settlement. Because preference was given to those who were married or had a fiancee, men without German wives or fiancees married, in great numbers, Colchester girls. There are dozens of marriages recorded in the Colchester Churches, mainly St Botolphs, and the remainder were married at the Garrison Church. This establishment was later found not to be registered for marriages, and so the affected couples were declared wed by Act of the Cape Parliament in 1858.[3]

8th (Cyclist) Battalion, Essex Regiment, (TF) was based in Colchester at the outbreak of war in August 1914. It was redesignated 1/8th Battalion as additional "Terrier" battalions were raised from volunteers during the early months of the war. The 2/8th and 3/8th Battalions were formed in September 1914 and April 1915 respectively. All three Terrier battalions were allocated to home defence and remained in the United Kingdom throughout the war.[4]

The Essex Yeomanry (EY), a cavalry regiment, was mobilised at the outbreak of war. The regiment joined the Royal Horse Guards and the 10th Royal Hussars in France in November 1914 as part of 8th Cavalry Brigade, 3rd Cavalry Division.[5] During the war, 2nd and 3rd line regiments were raised in Colchester to reinforce the 1st line. 2 EY served as garrison troops in Ireland during the war, 3 EY was absorbed into the 4th Reserve Cavalry Regiment in 1917.[6]

On 14 March 1918, Essex Yeomanry left 8th Cavalry Brigade to become a cyclist unit, then to form a machine gun battalion with the Bedfordshire Yeomanry. The German Spring Offensive forestalled this plan, and the regiment was remounted on 28 March and sent to the 1st Cavalry Division. From 4 April it was split up with a squadron joining each regiment in 1st Cavalry Brigade (2nd Dragoon Guards, 5th Dragoon Guards and 11th Hussars).[7]

During the war the town was defended by local defence volunteers of 8th Essex Battalion of the Home Guard. At the height of its strength the battalion mustered over 2,000 men. The battalion possessed no fewer than 22 different types of weapon, including Vickers machine guns, flame throwers, and 2 pounder anti tank guns. Additional support throughout the area was provided by 13th Essex Battalion, made up of volunteers from the GPO who were charged with the protection of critical telecommunications infrastructure.

The order to "stand down" for the Home Guard came on 1 November 1944. They took their final salute on 19 November before the Lord Lieutenant of the county, Colonel Sir Francis Whitmore. Whitmore said, "You have, by your sense of duty, your loyalty and patriotism, contributed pages of tradition to the historical records of our nation... you took a prominent part in the defence of our country at the most critical period of the war... In the name of the County of Essex, I thank you." [10]

Sub-units of the Auxiliary Units served in the Colchester area during the war, although their existence and activities remained little known to the public until the 1990s.

During the war the town was ringed by over 120 pillboxes or other defensive structures as part of the Colchester Stop Line. A small number of pillboxes can still be found around the borough, such as at Mount Bures,[11] and the Hythe railway station.[12]

Air raid sirens sounded over 1000 times in Colchester during the course of the war. Colchester was attacked by the Luftwaffe on several occasions.[13] They included:

The first American military personnel arrived in Britain in January 1942. A significant American presence was established in the Colchester area, with many air bases of the US Eighth Air Force located in the district - at Earls Colne, Langham, Wormingford, Messing, and Dedham. In accordance with racial segregation of the American military during World War II, the American Red Cross established separate social clubs for black GIs at St Botolph's parish hall and for white GIs in St Nicholas Street.

The old Garrison Church in Military Road was a former Crimean War era hospital, similar to those shipped in prefabricated sections to Florence Nightingale at Scutari and Balaklava. It was built in 1854 and is the oldest surviving garrison building.

In Easter 2007, services transferred to a new church built on the St. Michaels estate in the married quarters. It is situated behind the Community Centre, and was built as part of the ongoing regeneration of Colchester Garrison.

The old Garrison Church building is (as of November 2008) the home of the Parish of St John the Wonderworker, a parish of the Diocese of Great Britain and Ireland in the Russian Orthodox Church Outside Russia (ROCOR).[15]

Former barracks (not in use) 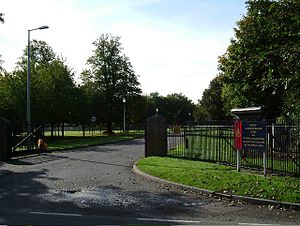 The entrance to the Military Corrective Training Centre

Berechurch Hall Camp is the home of the Army's Military Corrective Training Centre which incorporates the Naval Detention Quarters and is the only dedicated military facility of its kind in the United Kingdom.[17] It is not a prison, although it has a special unit for those who are being transferred to HM Prison Service to serve their sentences. Inmates are in three categories:

BFBS Radio now runs the radio broadcasting service for the area having won the contract from Garrison Radio.[18] The local service in Colchester launched in 2001 after test transmissions. They broadcast from studios in the married quarters of the garrison. In May 2006 Colchester Garrison radio switched to 107FM from 1350AM, after receiving a Community Licence. They became 107 Garrison FM

The feed from Garrison FM began broadcasting, in November 2005, to the Army Training Regiment in Bassingbourn on 1287AM as well as Colchester.