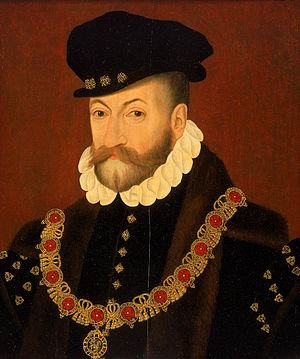 Edward Fiennes de Clinton, 1st Earl of Lincoln, wearing the Collar of the Order of the Garter (c. 1575).

A collar is an ornate chain, often made of gold and enamel, and set with precious stones, which is worn about the neck as a symbol of membership in various chivalric orders. It is a particular form of the livery collar, the grandest form of the widespread phenomenon of livery in the Middle Ages and Early Modern Period. Orders which have several grades often reserve the collar for the highest grade (usually called the Grand Cross). The links of the chain are usually composed of symbols of the order, and the badge (also called "decoration", "cross" or "jewel") of the order normally hangs down in front. Sometimes the badge is referred to by what is depicted on it; for instance, the badge that hangs from the chain of the Order of the Garter is referred to as "the George".

The first of the Orders of Knighthood were the military orders of crusaders who used red, green or black crosses of velvet on their mantles, to distinguish their brotherhoods. Later the members of knightly orders used rings, embroidred dragons and even garters as the symbol of their order. In the late Middle Ages the knights wore their insignia ever more prominently and medaillons, crosses and jewels in the shape of animals began to be worn on chains around the neck, known as livery collars. After the 17th century the heyday of the collar was over. They were worn only on ceremonial occasions and replaced in daily life by stars pinned to the breast, and badges suspended from ribbons. Many orders retained their collars and when orders were divided into several ranks or grades the collar was usually reserved for the highest rank. The notable exception is Portugal. 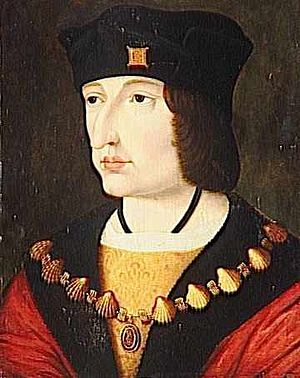 Charles VIII of France, wearing the collar of the Order of Saint Michael.

Collars of various devices are worn by the knights of some of the European orders of knighthood. The custom was begun by Philip III, Duke of Burgundy, who gave his Knights of the Golden Fleece, badges depicting a golden fleece hung from a collar of flints, steels and sparks. Following this new fashion, Louis XI of France, when instituting his Order of St. Michael in 1469, gave the knights collars composed of scallop shells linked on a chain. The chain was doubled by Charles VIII, and the pattern underwent other changes before the order lapsed in 1830.

At the end of the 18th century most of the European orders had only one rank; that of Knight and although they usually had collars, the cross or badge was now worn on a ribbon around the neck or over the right shoulder. When the orders became more democratic several ranks were introduced and only the highest grade, the "Grand Commanders" or "Grand Crosses", wore collars. The Netherlands never had collars but several Belgian, most of the Austrian and Prussian orders, and several Portuguese orders had collars. In Portugal all the members of these orders of knighthood wear a collar but the collars of the Grand Cross are more elaborate.

Sometimes the collar is used as the insignia of office of the Grand Master of the order. For instance, the President of France wears the collar of the Order of the Legion of Honour. In other countries such as Brazil the collar is a rank above that of a Grand Cross and it is reserved for the president and foreign heads of state. Napoleon I introduced the Grand aigle (Grand Eagle) to replace the Grand Cross as the highest rank in his Legion of Honour. Napoleon dispensed 15 such golden collars of the Legion among his kinsmen and the highest of his ministers. This collar did not survive his downfall and was abolished in 1815. 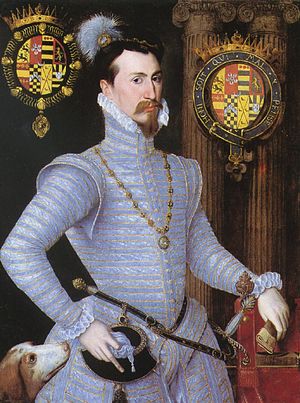 Robert Dudley, Earl of Leicester, his arms at left are surrounded by the Collar of the Order of St Michael.

Until the reign of Henry VIII, the Order of the Garter, most ancient of the great knightly orders, had no collar. But the Tudor king wished to match the continental sovereigns in all things, and the present collar of the Garter knights, with its golden knots and its buckled garters enclosing white roses set on red roses, has its origin in the Tudor age. Most of the British orders of knighthood have collars and they are still worn on special occasions (see Collar days). The Distinguished Service Order, the Order of Merit, the Order of the Companions of Honour and the Imperial Service Order are the exceptions. The Royal Victorian Chain consists of a collar alone, and no other insignia are worn by its recipients.

In heraldry, most members of orders are permitted to display the collar of their order on their coat of arms (if they are in fact entitled to wear the collar). There are often very strict rules as to how exactly the collar is to be displayed. Normally it will entirely encircle the escutcheon (shied), or the collar may be partially hidden by it. Sometimes, only a part of the collar and the badge will extend below the escutcheon.

When a member of an order dies, they are not usually buried with the collar, but it may be displayed on a pillow placed on the coffin during the funeral. Many orders require that after the death of a member of the order, the collar and perhaps other insignia be returned to the issuing authority. Often, the requirement is that a male relative personally return the award to the order.

Orders with a collar as highest granted rank