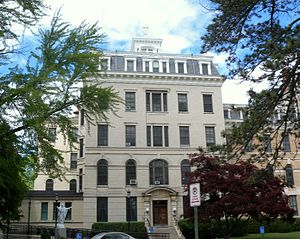 The College of Saint Elizabeth (CSE) is a private Roman Catholic, four-year, liberal arts college. It is located in an unincorporated community called Convent Station, in Morris Township, Morris County, New Jersey, United States. A large portion of the college's campus extends into the neighboring municipality of Florham Park.

The college was founded in 1899 by the Sisters of Charity of Saint Elizabeth and is the oldest women's college in New Jersey and one of the first Catholic colleges in the United States to award degrees to women. It is named for Elizabeth Ann Seton (1774–1821), who founded the Sisters of Charity and who, after her death, was canonized as the United States' first native-born saint. (Seton Hall University in New Jersey and Seton Hill University in Pennsylvania are also named after Elizabeth Ann Seton.)

The College of Saint Elizabeth is located on the campus of the Sisters of Charity of Saint Elizabeth. Portions of the 200-acre (0.81 km2) wooded campus flow into Florham Park, New Jersey, including the Villa of Saint Ann, the campus classical Greek amphitheater built into a hillside, and the original dairy farm for the complex.

At the college's front gate, the New Jersey Transit rail station provides frequent daily services to New York City, and the journey by train is approximately one hour.

The College of Saint Elizabeth consists of 8 buildings:

The campus also houses a Greek Theater used for concerts and performances, the Shakespeare Garden, completed in 1931, and a greenhouse, built in 1911 and a popular site for visitors.

The College of Saint Elizabeth teams participate as a member of the National Collegiate Athletic Association's Division III. The Eagles are a member of the North Eastern Athletic Conference (NEAC). Women's sports include basketball, lacrosse, soccer, softball, tennis and volleyball.[2]