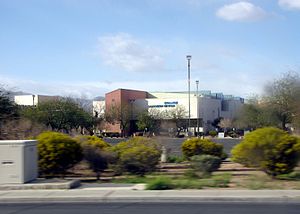 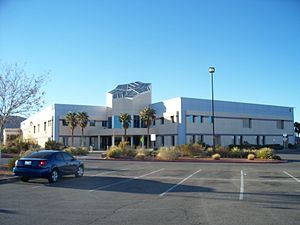 The College of Southern Nevada (CSN) is primarily a two-year college in Clark County, Nevada, with one four-year degree in Dental Hygiene. The school is the largest public higher education institution in Nevada.[1][2] It is part of the Nevada System of Higher Education.

College of Southern Nevada has three main campuses in the Las Vegas Valley: the Charleston Campus, Cheyenne Campus and Henderson Campus, and a campus in Pahrump. There are also centers located in Moapa Valley, Summerlin, and Mesquite, as well as Nellis Air Force Base and Green Valley.

The current president of CSN is Dr. Michael Richards. Richards was appointed leader of the college by the Nevada Board of Regents in May 2008 after serving as interim president since August 2007.[6]

CSN's undergraduate degrees have received regional accreditation from Northwest Commission on Colleges and Universities since 1975.[9]

On January 3rd, 2015, two women, both administrative staff of CSN, were arrested for embezzling approximately $234,000 from the school's trust fund account, resulting in over 100 students being dropped from classes days prior to the start of the Spring 2015 semester. Both women were charged and convicted under federal law, 18 U.S. Code § 641. Controversy arose when the victims were not reimbursed the funds for their lost classes. A majority of these students are currently involved with a class action lawsuit filed against the Nevada System of Higher Education, a case which is currently awaiting trial.

The College of Southern Nevada Coyotes compete in the Scenic West Athletic Conference of the NJCAA's Division I. The school currently has four athletic programs—baseball, softball, volleyball, and soccer. Baseball's first season was in 2000, and softball began its first season in 2004. Men and Women's Soccer are now returning to CSN and campus-wide improvements will be coming to all three campuses (including the Henderson Campus, where Athletics will be headquartered).

On March 18, 1999, CSN hired its first baseball coach—local legend Rodger Fairless, who coached former MLB pitchers Greg Maddux and Mike Maddux at Valley High School during the 1980s, and was more well known for coaching Green Valley High School to six consecutive Nevada state baseball championships from 1993-98. But, before Fairless would even conduct his first baseball practice at CSN, he stepped down[11] on May 4, 1999, citing health reasons. Fairless would be replaced by another local veteran coach, Tim Chambers,[12] on July 8, 1999.

The Coyotes played their first-ever game on February 1, 2000, against Scottsdale Community College, and quickly grew into a perennial contender. They joined the Scenic West Athletic Conference in 2002, quickly asserting themselves a place in the conference, becoming rivals with Dixie State College until they moved up to NCAA Division II in 2006. Since joining the SWAC, CSN has won six conference championships, two Region XVIII championships and two Western District championships. Today, the Coyotes' rivals are the Western Nevada Wildcats, as they are the only two junior colleges in Nevada to have intercollegiate athletics, and also fueled by their fierce battles on the diamond.

On May 31, 2003, the Coyotes made history, defeating the heavily favored San Jacinto-North Gators 4-1 to win the 2003 National Junior College World Series in only their fourth year of existence. It is CSN's only national championship in any sport to date.

In 2010, catcher Bryce Harper was selected first overall by the Washington Nationals in the Major League Baseball First Year Player Draft after a season in which he batted .443/.526/.987 (AVG/OBP/SLG) with 98 runs scored, 31 home runs, 98 RBIs, 20 SBs, and a 1.510 OPS, leading the team to a third-place finish at the National Junior College World Series. He was selected as an outfielder.[13]

On June 11, 2010, just one week after the Coyotes had been eliminated from the JUCO World Series, longtime head coach Tim Chambers took the head coaching job at UNLV.[14] There would be no vacancy for long though, as CSN hired former Bishop Gorman High School baseball coach Chris Sheff[15] on July 9, 2010, to carry on the legacy that Chambers built.

Sheff would become the second baseball coach in CSN history to never coach a game. Allegations of illegal activity[16] in the eyes of the NJCAA and parents alike came up, and on November 3, 2010, the school decided to relieve Sheff of his duties.[17]

Six days later, on November 9, 2010, CSN hired former Green Valley High School coach Nick Garritano[18] as its head baseball coach. Garritano, who was Fairless' successor at Green Valley, won two state championships during his 12 years at the helm, producing a 315-118-1 record. He played sports at Chaparral High School and was inducted into the UNLV Hall of Fame as a former place-kicker for the football team.

On May 5, 2012, the baseball clubhouse was officially named after James B. Whiteaker in a dedication ceremony that took place prior to the final baseball game of the regular season. Today, "Building D" is now known as the James B. Whiteaker Clubhouse.

As of Fall 2015, CSN will also be hosting Men/Women's Soccer.

The Coyotes softball team debuted in the spring of 2004. The Coyotes' home field is located at the Russell Road Recreation Complex, a park operated by the City of Henderson. Talks are in the works to build a softball stadium on the CSN Henderson campus, adjacent to the baseball stadium, with funding being its major obstacle.

The program's first coach was Ric Grenell, who previously had coached women's soccer at CSN from 2000-02 before the sport was discontinued.

After a moderate first season record of 16-30, the 2005 softball team did less well, winning only six games. Shortly after the 2006 season began, another rough start prompted Grenell to resign, and Ysidro Jimenez took over as interim head coach. Jimenez would become the permanent head coach at season's end, and remained the head coach until June 2011.

Under Jimenez, CSN softball enjoyed five winning seasons from 2007–11, including a record 38 wins in the 2011 season. But, after failing to win a conference or region championship, then-assistant coach and former longtime Hawaii-Hilo softball coach Callen Perreira was announced as Jimenez's replacement,[19] and officially took over the helm on July 1, 2011.

As of Fall 2015, Head Coach Amanda Montalto has been leading the ladies softball team. Spring 2016 will mark an exciting period for the ladies team, as CSN will be building their first softball field located on the Henderson Campus.

Media related to College of Southern Nevada at Wikimedia Commons