The Colombian Air Force or FAC (Spanish: Fuerza Aérea Colombiana) is the Air Force of the Republic of Colombia. The Colombian Air Force (FAC) is one of the three institutions of the Military Forces of Colombia, charge according to the 1991 Constitution of the work to exercise and maintain control of Colombia's airspace to defend the sovereignty, territorial integrity and constitutional order. It is one of the largest American air forces (after Brazil, Peru and U.S.) and increased activity due to its important role in the fight against narco-terrorism.

Air Force is the only global processes that have accredited with ISO 9001 and NTCGP 1000. The system corresponds to ISO 9001 quality management with the international standard, which inscribed the FAC as a world-class organization. The second certificate, the NTCGP 1000, corresponds to the technical standard of quality of governance, as a result of Act 872 of 2003 requires all public bodies to implement the quality management system by December 2008.

The FAC has the distinction of having been used in missions of observation and aerial combat from the Colombian-Peruvian war of 1932, never elected government was ousted by force, as the FAC helped quell many rebellions from terrorism, military and political. The Colombian Air Force also served with distinction during the Second World War in the islands of San Andrés.

Military aviation began in Colombia in 1919 with the creation of a military aviation school for the Colombian Army. Previously by Law 15 of 1916 of September 7 two commissions were sent overseas to study new technological advancements in aviation, infantry, cavalry, engineering and trains. Officers pertaining to the Colombian Army were also sent to take a course on flight training on techniques and tactics. The school was then created in Colombia along with the Colombian National Army Aviation as a fifth regiment by Law 126 of 1919 of December 31 authorized by President of Colombia, Marco Fidel Suárez. The unit was officially activated on February 15, 1921 in Flandes, Department of Tolima with the support of a French mission led by Lieutenant Colonel Rene Guichard. The Aviation School initially had 3 Caudron G.3 E-2, 3 Caudron G.4 A-2 and four Nieuport Delage 11 C-1. The school was closed due to financial hardships in 1922.

The School of Military Aviation was reopened on November 8, 1924 in Madrid, Department of Cundinamarca with the support of a Swiss mission headed by Captain Henry Pillichody. The aircraft used for training were 4 Wild WT and 8 Wild X performing the first air review on August 7, 1927. Then on December 28, 1928 the first combat aircraft was shown in Colombia, the Curtiss Falcon O-1. 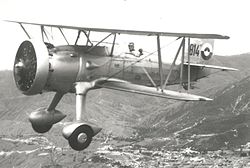 On September 1, 1932 civilian Peruvians illegally crossed into Colombian territory and invaded the town of Leticia in the Colombian Amazon arguing and claiming that the town was original Peruvian territory. The Colombian military aviation only had 11 instructors, four Curtiss-Wright CW-14R Osprey air combat support planes and one Curtiss Falcon O-1. The military aviation then received full financial support from the Congress of Colombia. Colombia bought aircraft from Germany and the United States, while others were activated from the airline operating in Colombia SCADTA (Sociedad Colombo-Alemana de Transporte Aéreo) and their pilots, which included some German citizens, one of these was Major Herbert Boy. The imported aircraft were 4 Junkers F.13, 4 Junkers W 34 and 3 Junkers K 43, 6 Junkers Ju 52, 2 Dornier Merkur II, 4 Dornier Wal, 20 Curtiss Falcon F-8F and 30 Curtiss Hawk II F-11C.

The contingent was then sent to southern Colombia to fight Peruvian forces with the main mission of delivering supplies to the front lines, aerial reconnaissance and air to land attacks. The fleet was divided into three squadrons with Puerto Boy as the main camp site. Support bases were in Caucaya airstrip (Puerto Leguízamo), El Encanto, Puerto Arica, La Pedrera and Tarapacá. The main combat operations started on February 14, 1933 in Tarapacá where the Peruvian garrison was bombed by seven Colombian aircraft and later assaulted by land forces. Later, on March 26, in the village of Guepi eleven Colombian planes and two cannon boats (MC Cartagena y MC Santa Marta) bombarded Peruvian positions and took over the town.

The last military actions of the conflict with Peru were on May 8, 1933 and in which there was an aerial engagement between the two forces. Peruvian planes were attacking the fluvial fleet of Colombia over the Algodón River and were surprised by the Colombian squadron. One of the Peruvian aircraft, a Douglas O-38P was gunned down and taken to Colombian territory. On May 24, 1933 a cease fire was declared after an agreement was reached with the intervention of the League of Nations. The town of Leticia was returned to Colombia. The captured plane was then returned to Peru. As a result of the war, four pilots died in four accidents during non-combat related actions. Among these was one of the German pilots. Four planes were lost in these accidents a Falcon O-1, an Osprey C-14, a Junker F-13 and a Curtiss F-11. 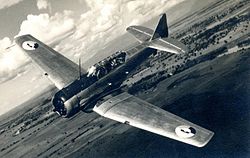 The AT-6 Texan U.S. origin served as a support during the Second World War, defending the country's Caribbean coast 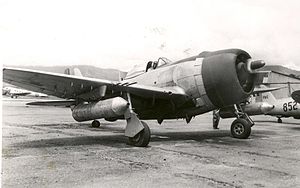 Thunderbolt F-47D of the Colombian Air Force in 1946

The Second World War was the diplomatic breach between Colombia and the Axis countries (Germany, Italy and Japan), December 18, 1941, when President Eduardo Santos took the decision following the Japanese attack on military bases, naval and U.S. carriers at Pearl Harbor, Hawaii. Thereafter, the Colombian government introduced special measures to limit and counter the Axis military action in areas of national jurisdiction. However, the June 23, 1942 a German submarine attacked and sank the schooner Colombian "Resolute", 50 miles northwest of the island of San Andrés. The same schooner had rescued some Marine officers and 23 British Royal Navy survivors of a capsized ship, 200 miles north of Cartagena just five days before.

Following these events, the government took the decision to patrol and monitor the Pacific Coast and the Colombian Caribbean coast. The Palanquero Air Base commanders decided to move one fighter squadron and a Combat Reconnaissance Squadron, consisting of F-8 Falcon aircraft, to Barranquilla,. In 1943, the Falcons were relieved of their mission and replaced by the AT-6 Texan. This Squadron was active until 1945, when the AT-6 were transferred back to Palanquero Air Base. 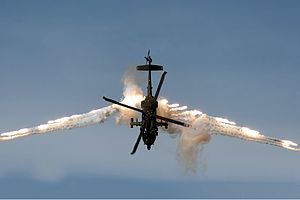 The tables below display the rank structures and rank insignias for the Colombian Air Force personnel.[28] 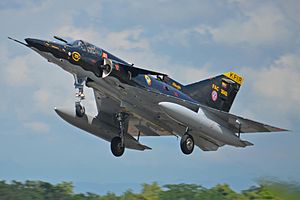 An IAI Kfir on take off 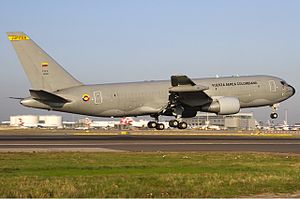 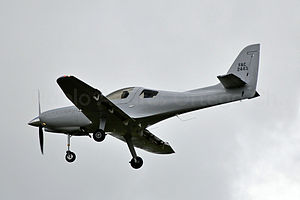 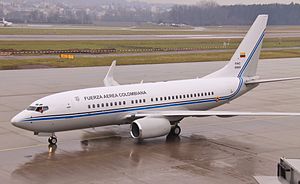 A FAC Boeing 737 at Zürich Airport 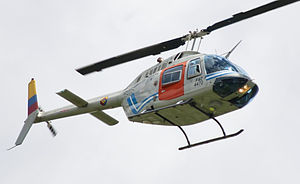 A Bell 206 fly over during the Colombian Bicentennial 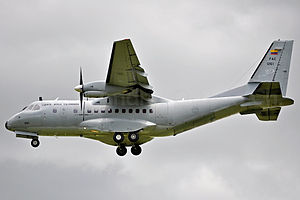 A CASA CN-235 in Flight
celebration

Pervious aircraft operated by the Air Force consisted of the Gavilán G358, and the OV-10A Bronco[30] 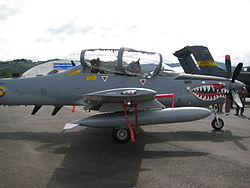 Super Tucano to the Colombian Air Force. these aircraft were acquired in 2006

The aircraft used by the Colombian Air Force are identified with the letters "FAC" followed by three or four numbers that are painted on the tail, nose and nose landing gear doors. The serial numbers are assigned according to the aircraft's primary role as follows: