From Infogalactic: the planetary knowledge core
Jump to: navigation, search
For other uses, see Colonia. 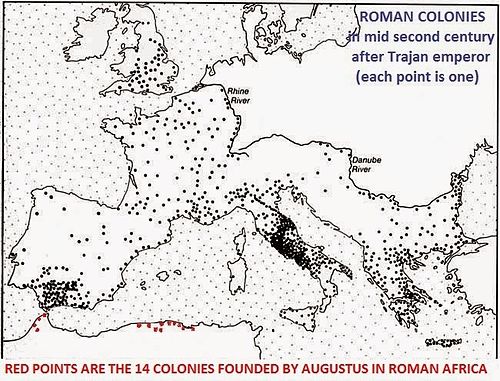 Map showing the "roman coloniae" in the second century, after Trajan. Note the concentration in Italia (Italy), Gallia (France) and Hispania (Spain)

A Roman colonia (plural coloniae) was originally a Roman outpost established in conquered territory to secure it. Eventually, however, the term came to denote the highest status of Roman city.

The Roman Republic, having no standing army, used to plant bodies of their own citizens in conquered towns as a kind of garrison. Initially these bodies would consist partly of Roman citizens, usually to the number of three hundred; but after Augustus the number was increased and thousands of Romans who retired from their legions were granted lands in many colonies in the empire.

In the first century of the Roman empire the colonies were made only of "veterans" and were responsible for the Romanization of many territories (mainly in the spread of latin language and of roman laws & customs). Nowadays neolatin languages are spoken in many of the areas where these veterans settled.

After the era of the Severian emperors the new "colonies" were only cities that were granted a status (often of tax exemption) and in most cases during the Late empire times there was no more settlement of retired legionaries.

According to Livy, Rome's first colonies were established in about 752 BC at Antemnae and Crustumerium.[1]

Other early colonies were established at Signia in the 6th century BC, Velitrae and Norba in the 5th century BC, and Ostia, Antium, and Tarracina in the late 4th century. In this first period of colonization, which lasted down to the end of the Punic Wars, colonies were primarily military in purpose, being intended to defend Roman territory. There were colonies of citizens and colonies of Latins, which differed in size, constitution, and region. Colonies of citizens were typically coastal and known as coloniae maritimae. These were small (three hundred families), close to Rome, and enjoyed no civic life of their own. Sherwin-White suggested that they were similar to the Athenian cleruchy.[2]

Coloniae also included towns founded by Rome to house those who held Roman citizenship. In Britain this usually meant those who had completed their military service in the Legions and were thus owed a grant of land by the state; see Marian Reforms.

Some examples are (origins of modern names suggested in bold):