From Infogalactic: the planetary knowledge core
Jump to: navigation, search
This article is about a type of political territory. For other uses, see Colony (disambiguation). 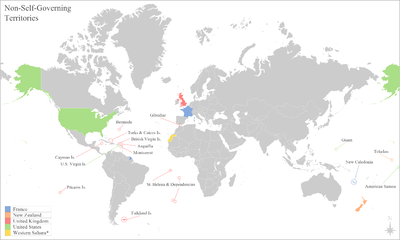 Chart of non-self-governing territories (as of June 2012[update]). 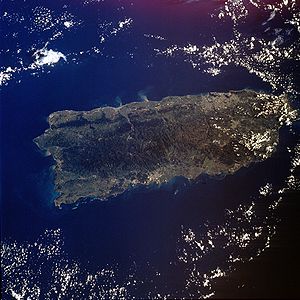 In politics and history, a colony is a territory under the immediate political control of a state, distinct from the home territory of the sovereign. For colonies in antiquity, city-states would often found their own colonies. Some colonies were historically countries, while others were territories without definite statehood from their inception. The Metropolitan state is the state that owns the colony. In Ancient Greece, the city that founded a colony was known as the metropolis. "Mother country" is a reference to the metropolitan state from the point of view of citizens who live in its colony. There is a United Nations list of Non-Self-Governing Territories.

Unlike a puppet state or satellite state, a colony has no independent international representation, and its top-level administration is under direct control of the metropolitan state.

The term informal colony is used by some historians to refer to a country under the de facto control of another state, although this term is often contentious.

The word "colony" comes from the Latin word colōnia. This in turn derives from the word colōnus, which means colonist but also implies a farmer. Cologne is an example of a settlement preserving this etymology. Other, less obvious settlements that began as Roman colonia include cities from Belgrade to York. A tell-tale sign of a settlement once being a Roman Colony is a city centre with a grid pattern.[4] The terminology is taken from architectural analogy, where a column pillar is beneath the (often stylized) head capital, which is also a biological analog of the body as subservient beneath the controlling head (with 'capital' coming from the Latin caput, meaning 'head'). So colonies are not independently self-controlled, but rather are controlled from a separate entity that serves the capital function.

Roman colonies first appeared when the Romans conquered neighbouring Italic peoples. These were small farming settlements that appeared when the Romans had subdued an enemy in war. A colony could take many forms, as a trade outpost or a military base in enemy territory. Its original definition as a settlement created by people migrating from a central region to an outlying one became the modern definition.

The Special Committee on Decolonization maintains the United Nations list of Non-Self-Governing Territories, which identifies areas the United Nations (though not without controversy) believes are colonies. Given that dependent territories have varying degrees of autonomy and political power in the affairs of the controlling state, there is disagreement over the classification of "colony".