From Infogalactic: the planetary knowledge core
Jump to: navigation, search
Not to be confused with combinatory logic, a topic in mathematical logic. 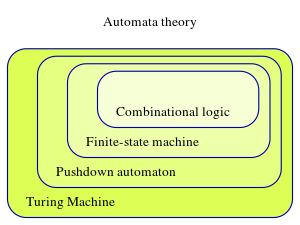 In digital circuit theory, combinational logic (sometimes also referred to as time-independent logic[1] ) is a type of digital logic which is implemented by Boolean circuits, where the output is a pure function of the present input only. This is in contrast to sequential logic, in which the output depends not only on the present input but also on the history of the input. In other words, sequential logic has memory while combinational logic does not.

An alternate term is combinatorial logic,[2] though this usage may be considered controversial.[3]

Using sum of products, all logical statements which yield true results are summed, giving the result:

Using Boolean algebra, the result simplifies to the following equivalent of the truth table:

Minimization (simplification) of combinational logic formulas is done using the following rules based on the laws of Boolean algebra:

With the use of minimization (sometimes called logic optimization), a simplified logical function or circuit may be arrived upon, and the logic combinational circuit becomes smaller, and easier to analyse, use, or build.