There are several definitions of command and control (C2). According to older versions of U.S. Army FM 3-0, C2 in a military organization is the exercise of authority and direction by a properly designated commanding officer over assigned and attached forces in the accomplishment of the mission.[1][2] The term may also refer to command and control systems within a military system.

The 1988 NATO definition reads: Command and control is the exercise of authority and direction by a properly designated [individual] over assigned [resources] in the accomplishment of a [common goal].[3]

The Australian Defence Force definition is similar: C2 is the system empowering designated personnel to exercise lawful authority and direction over assigned forces for the accomplishment of missions and tasks.[4] (The Australian doctrine goes on to state: The use of agreed terminology and definitions is fundamental to any C2 system and the development of joint doctrine and procedures. The definitions in the following paragraphs have some agreement internationally, although not every potential ally will use the terms with exactly the same meaning.[4])

Canadian defence scientists Ross Pigeau and Carol McCann discuss the issues and uncertainties related to the definition of command & control in their article in the Canadian Military Journal.[5] The book by Vassiliou et al. [6] contains an appendix comparing and contrasting various definitions, and also provides a useful overarching definition that subsumes most of the official ones: "'Command and Control' (C2) denotes the set of organizational and technical attributes and processes by which an enterprise marshals and employs human, physical, and information resources to solve problems and accomplish missions."

The US Department of Defense Dictionary of Military and Associated Terms.[7] defines command and control as: "The exercise of authority and direction by a properly designated commander over assigned and attached forces in the accomplishment of the mission. Also called C2. Source: JP 1".[8]

The edition of the Dictionary "As Amended Through April 2010" elaborates, "Command and control functions are performed through an arrangement of personnel, equipment, communications, facilities, and procedures employed by a commander in planning, directing, coordinating, and controlling forces and operations in the accomplishment of the mission."[9] However, this sentence is missing from the "command and control" entry for the edition "As Amended Through 15 August 2014."[10]

The purpose of a military staff is mainly that of providing accurate, timely information which by category represents information on which command decisions are based. The key application is that of decisions that effectively manage unit resources. While information flow toward the commander is a priority, information that is useful or contingent in nature is communicated to lower staffs and units.[citation needed]

This term is also in common use within the computer security industry and in the context of cyberwarfare. Here the term refers to the influence an attacker has over a compromised computer system that they control. For example, a valid usage of the term is to say that attackers use "command and control infrastructure" to issue "command and control instructions" to their victims. Advanced analysis of command and control methodologies can be used to identify attackers, associate attacks, and disrupt ongoing malicious activity.[11]

There is a plethora of derivative terms which emphasise different aspects, uses and sub-domains of C2. These terms come with a plethora of associated abbreviations – for example, in addition to C2, command and control is also often abbreviated as C2, and sometimes as C&C. 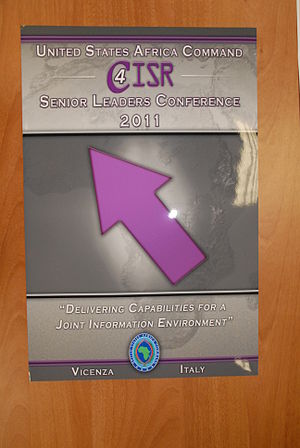 Command and control have been coupled with

Some of the more common variations include:

Command: The exercise of authority based upon certain knowledge to attain an objective.
Control: The process of verifying and correcting activity such that the objective or goal of command is accomplished.
Communication: Ability to exercise the necessary liaison to exercise effective command between tactical or strategic units to command.
Computers: The computer systems and compatibility of computer systems. Also includes data processing.
Intelligence: Includes collection as well as analysis and distribution of information.

Various branches of the US military such as the US Coast Guard and Navy have command and control centers. They are also common in many large correctional facilities.

A command and control center that is used by a military unit in a deployed location is usually called a "command post".[16] A warship has a Combat Information Center for tactical control of the ship's resources, but commanding a fleet or joint operation requires additional space for commanders and staff plus C4I facilities provided on a Flagship (e.g., aircraft carriers), sometimes a Command ship or upgraded logistics ship such as USS Coronado.

Command and control warfare encompasses all the military tactics that use communications technology. It can be abbreviated as C2W. An older name for these tactics is "signals warfare", derived from the name given to communications by the military. Newer names include information operations and information warfare

The following techniques are combined:

In addition to targeting the enemy's command and control, information warfare can be directed to the enemy's politicians and other civilian communications.

US and other NATO specific: