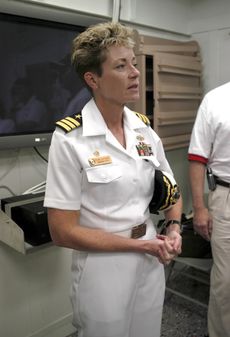 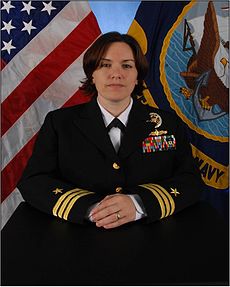 In the United States, commander is a military rank that is also sometimes used as a military billet title, depending on the branch of service. It is also used as a rank or title in some organizations outside the military, particularly in police and law enforcement.

The commander rank started out as "Master and Commander" in 1674 within the British Navy for the officer responsible for sailing a ship under the Captain and some times second-in-command. Sub-captain, under-captain, rector and master-commanding was also used for the same position. With the Master and Commander also serving as captain of smaller ships, the British Navy subsumed as the third and lowest of three grades of captain given the various sizes of ships. The American Continental Navy adopted the tri-graded captain ranks. Captain 2nd Grade, or Master Commandant, became Commander in 1838.[1]

In the United States Navy, the United States Coast Guard, the United States Public Health Service Commissioned Corps, and the National Oceanic and Atmospheric Administration Commissioned Officer Corps, commander (abbreviated "CDR") is a mid-grade officer rank, with the pay grade of O-5. Commander ranks above lieutenant commander (O-4) and below captain (O-6). Commander is equivalent to the rank of lieutenant colonel in the other uniformed services.[2] Notably, it is the first rank at which the holder wears an embellished cap, whereas officers of the other services are entitled to embellishment at O-4 rank. Promotion to commander in the US Navy is governed by Department of Defense policies derived from the Defense Officer Personnel Management Act (DOPMA) of 1980 or its companion Reserve Officer Personnel Management Act (ROPMA). DOPMA/ROPMA guidelines suggest that 70% of lieutenant commanders should be promoted to commander after serving a minimum of three years at their present rank and after attaining 15-17 years of cumulative commissioned service, although this percentage may vary and be appreciably less for certain officer designators (i.e., primary "specialties") dependent on defense budgets, force structure and needs of the service.

A commander in the U.S. Navy may command a frigate, destroyer, submarine, aviation squadron or small shore activity, or may serve on a staff afloat or ashore (typically as an action officer or as an executive officer to a flag officer or general officer), or a larger vessel afloat (as either a department head or executive officer). An officer in the rank of commander who commands a vessel may also be referred to as "captain" as a courtesy title, or informally referred to as "skipper". Commanding officers of aviation squadrons and shore activities may also be informally referred to as "skipper" but never as "captain."[3]

Although it exists largely as a maritime training organization, the U.S. Maritime Service also has the grade of commander. The commission is appointed by the President via the Secretary of Transportation, making it a federally recognized rank with a corresponding paygrade.

The Los Angeles Police Department was one of the first American police departments to use this rank. A commander in the LAPD is equivalent to an inspector in other US departments (such as the NYPD); the LAPD rank was originally called inspector as well, but was changed in 1974 to commander after senior officers voiced a preference for the more military-sounding rank. A commander is the third-highest rank in the force, above the rank of captain and below deputy chief. Duties are as commanding officer of Community Affairs, Internal Affairs, Governmental Liaison, Narcotics, Organized Crime and Vice, Criminal Intelligence, Detective Services, and other departments.[4]

The San Francisco Police Department also has a Commander rank. Like the LAPD, it is above Captain and below Deputy Chief.

The Metropolitan Police Department of the District of Columbia uses the rank of commander. The rank falls between those of inspector and assistant chief.

Many police departments in the Midwest use the rank of commander. It is equivalent to a lieutenant in most other departments, being above a sergeant and below a deputy chief or captain. Commander is also used as a title in certain circumstances, such as the commander of a squad of detectives, who would usually be of the rank of lieutenant.

Commander is also utilized by larger sheriff's departments in the United States, with the rank usually falling between chief deputy and captain, three positions removed from the sheriff.

Commander as an appointment

In the United States Army and United States Marine Corps, the term "commander" is officially applied to the commanding officer of a unit; hence, there are company commanders, battalion commanders, brigade commanders, and so forth. At the highest levels of U.S. military command structure, "commander" also refers to what used to be called commander-in-chief, or CINC, until October 24, 2002, although the term CINC is still used in casual speech. The soldier in charge of a tank, for example the M1 Abrams, is also called its "commander".

In the Air Force, the term "commander" (abbreviated "CC") is officially applied to the commanding officer of an Air Force unit; hence, there are squadron commanders, group commanders, wing commanders, numbered air force (NAF) commanders, major command commanders and so forth. In rank, a squadron commander is typically a lieutenant colonel, although some smaller squadrons may be commanded by a major.