The common frog (Rana temporaria), also known as the European common frog, European common brown frog, or European grass frog, is a semi-aquatic amphibian of the family Ranidae, found throughout much of Europe as far north as Scandinavia and as far east as the Urals, except for most of Iberia, southern Italy, and the southern Balkans. The farthest west it can be found is Ireland, where it has long been thought, erroneously, to be an entirely introduced species. They are also found in Asia, and eastward to Japan.

Common frogs metamorphose through three distinct developmental life stages — aquatic larva, terrestrial juvenile, and adult. They have corpulent bodies with a rounded snout, webbed feet and long hind legs adapted for swimming in water and hopping on land. Common frogs are often confused with the common toad Bufo bufo, but frogs can easily be distinguished as they have longer legs, hop, and have a moist skin, whereas toads crawl and have a dry 'warty' skin. The spawn of the two species also differs in that frogspawn is laid in clumps and toadspawn is laid in long strings.

The adult common frog has a body length of 6 to 9 centimetres (2.4 to 3.5 in)[2] its back and flanks varying in colour from olive green[3] to grey-brown, brown, olive brown, grey, yellowish and rufous.[4] However, can lighten and darken its skin to match its surroundings.[3] Some individuals have more unusual colouration — both black and red individuals have been found in Scotland, and albino frogs have been found with yellow skin and red eyes.[3] During the mating season the male common frog tends to turn greyish-blue (see video below).[3] The average weight is 22.7 g (0.80 oz); the female is usually slightly larger than the male.[5]

The flanks, limbs and backs are covered with irregular dark blotches[3] and they usually sport a chevron-shaped spot on the back of their neck and a dark spot behind the eye.[4] Unlike other amphibians, common frogs generally lack a mid-dorsal band but, when they have one, it is comparatively faint.[4] In many countries moor frogs have a light dorsal band which easily distinguishes them from common frogs. The underbelly is white or yellow (occasionally more orange in females) and can be speckled with brown or orange.[3] The eyes are brown with transparent horizontal pupils, and they have transparent inner eyelids to protect the eyes while underwater, as well as a 'mask' which covers the eyes and eardrums.[3] Although the common frog has long hind legs compared to the common toad, they are shorter than those of the agile frog with which it shares some of its range. The longer hind legs and fainter colouration of the agile frog are the main features that distinguish the two species. 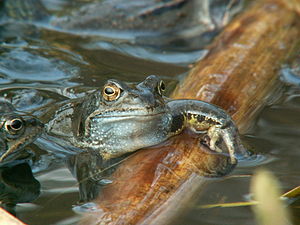 Male during breeding season showing the nuptial pad, white throat and a blue grey hue over the normal black and brown skin 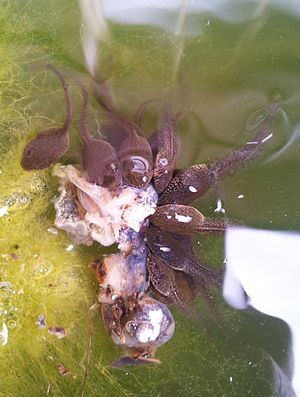 Males are distinguishable from females as they are smaller and have hard swellings, known as nuptial pads, on the first digits of the forelegs, used for gripping females during mating.[2][3] During the mating season males' throats often turn white, and their overall colour is generally light and greyish, whereas the female is browner, or even red.[4] 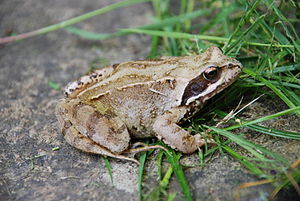 Rana temporaria in the United Kingdom

The common frog is found throughout much of Europe as far north as northern Scandinavia inside the Arctic Circle and as far east as the Urals, except for most of Iberia, southern Italy, and the southern Balkans. Other areas where the common frog has been introduced include the Isle of Lewis, Shetland, Orkney and the Faroe Islands. It is also found in Asia, and eastward to Japan.[3][6]

The common frog has long been thought to be an entirely introduced species in Ireland,[7] however, genetic analyses suggest that particular populations in the south west of Ireland are indeed indigenous to the country.[8] The authors propose that the Irish frog population is a mixed group that includes native frogs that survived the last glacial period in ice free refugia, natural post-glacial colonisers and recent artificial introductions from Western Europe.[8][9]

Newly hatched tadpoles are mainly herbivorous, feeding on algae, detritus, plants and some small invertebrates, but they become fully carnivorous once their back legs develop, feeding on small water animals or even other tadpoles when food is scarce.[4] Juvenile frogs feed on invertebrates both on land and in water but their feeding habits change significantly throughout their lives and older frogs will eat only on land.[3] Adult common frogs will feed on any invertebrate of a suitable size, catching their prey on their long, sticky tongues,[3] although they do not feed at all during the short breeding season.[3] Preferred foods include insects (especially flies),[4] snails, slugs and worms.[3]

Outside the breeding season, common frogs live a solitary life in damp places near ponds or marshes or in long grass.[10] They are normally active for much of the year, only hibernating in the coldest months.[4] In the most northern extremities of their range they may be trapped under ice for up to nine months of the year, but recent studies have shown that in these conditions they may be relatively active at temperatures close to freezing.[10] In the British Isles, common frogs typically hibernate from late October to January. They will re-emerge as early as February if conditions are favourable, and migrate to bodies of water such as garden ponds to spawn.[7] Where conditions are harsher, such as in the Alps, they emerge as late as early June. Common frogs hibernate in running waters, muddy burrows, or in layers of decaying leaves and mud at the bottom of ponds. The oxygen uptake through the skin suffices to sustain the needs of the cold and motionless frogs during hibernation.[3][4][11]

During the spring the frog's pituitary gland is stimulated by changes in external factors, such as rainfall, day length and temperature, to produce hormones which, in turn, stimulate the production of sex cells - eggs in the females and sperm in the male. The male's nuptial pad also swells and becomes more heavily pigmented.[12] Common frogs breed in shallow, still, fresh water such as ponds, with spawning commencing sometime between March and late June, but generally in April over the main part of their range.[4] The adults congregate in the ponds, where the males compete for females. The courtship ritual involves noisy vocalisations, known as "croaking", by large numbers of males. The females are attracted to the males that produce the loudest and longest calls and enter the water where the males mill around and try to grasp them with their front legs — although they may grasp anything of a similar size, such as a piece of wood. The successful male climbs on the back of the female and grasps her under the forelegs with his nuptial pads, in a position known as amplexus, and kicks away any other males that try to grasp her.[12] He than stays attached in this position until she lays her eggs, which he fertilises by spraying sperm over them as they are released from the female's cloaca.[3] The courtship rituals are performed throughout the day and night but spawning typically takes place at night. The females lay between 1,000 and 2,000 eggs which float in large clusters near the surface of the water.[13][3] After mating the pairs separate, the females will leave the water and the males will try to find another mate. Within three or four days all the females will have laid their eggs and left the water and the males disperse.[12] 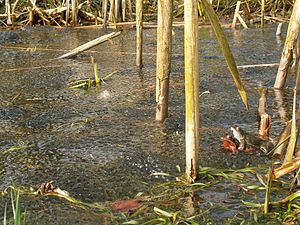 Common frogs are susceptible to a number of diseases, including Ranavirus and the parasitic fungus Batrachochytrium dendrobatidis which has been implicated in extinctions of amphibian species around the world.[14] Loss of habitat and the effect of these diseases has caused the decline of populations across Europe in recent years.[14] The common frog is listed as a species of least concern on the IUCN Red List of Threatened Species.[1]

Tadpoles are eaten by fish, beetles, dragonfly larvae and birds. Adult frogs have many predators including storks, birds of prey, crows, gulls, ducks, terns, herons, pine martens, stoats, weasels, polecats, badgers, otters and snakes.[15] Some frogs are killed, but rarely eaten, by domestic cats, and large numbers are killed on the roads by motor vehicles.[16]