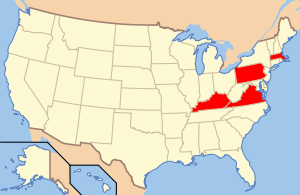 A map of the United States of America, showing the four states that refer to themselves as a "commonwealth" in red.

"Commonwealth" is a nomenclature used by four of the constituent states of the United States of America in their official, full state names. These states are Kentucky,[1] Massachusetts,[2] Pennsylvania,[3] and Virginia.[4] The four were among the first 15 states to join the Union.

This designation, which has no legal meaning, emphasizes that they have a "government based on the common consent of the people"[5] as opposed to one legitimated through their earlier royal colony status that was derived from the monarch of Great Britain. The word commonwealth in this context refers to the common "weal", or welfare, of the public[6] and is derived from a loose translation of the Latin term res publica (cf. the 17th-century Commonwealth of England).

The same term is also used by the U.S. Commonwealths of Puerto Rico and the Northern Mariana Islands, which are not states and where it has a distinct legal meaning.

The use of the term derives from the use of English common law in colonial America.[7][8] Some vestiges of the influence of common law can still be found in some legal concepts and principles in the Commonwealths, particularly in Virginia with its independent cities, which have their origin in the old English shire system, which was a part of how early Virginia was organized.[citation needed] 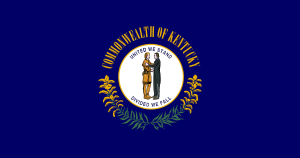 The Kentuckian flag, which features the title "Commonwealth of Kentucky".

On September 28, 1786, the residents of Kentucky County began petitioning the Commonwealth of Virginia legislature for statehood. They wished the County to be recognized as a "free and independent state, to be known by the name of the Commonwealth of Kentucky." On June 1, 1792, Kentucky County officially became a state. As in Virginia, the official title of the elected local prosecutor in each of Kentucky's political subdivisions is the "Commonwealth's Attorney," as opposed to State's Attorney in other States or the more standard District Attorney.

Kentucky is the only state outside of the first 13 that uses "Commonwealth" in its name (although at the time of independence it was a part of the Commonwealth of Virginia). 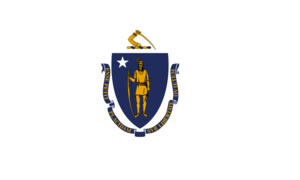 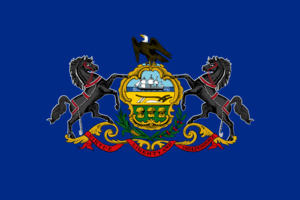 A detailed history describing the origins of Pennsylvania's government, including its designation as a commonwealth from colonial times, is available from the Secretary of the Commonwealth's office.[13] 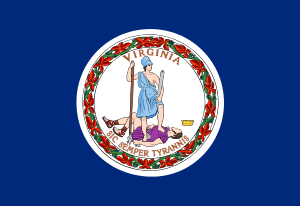 Among other references, the constitution furthermore dictated that criminal indictments were to conclude "against the peace and dignity of the Commonwealth." Additionally, the official title of the elected local prosecutor in each of Virginia's political subdivisions is the "Commonwealth's Attorney," as opposed to State's Attorney in other States or the more standard District Attorney.

In Virginia, the term State is occasionally used in an official manner, but usually in a compound structure rather than as a stand-alone noun. This is evident in the name of the agency "Virginia State Corporation Commission" and in "Virginia State Police", and as in the name of "Virginia Polytechnic Institute and State University".

The state university in Richmond is known as Virginia Commonwealth University (however, there is also a Virginia State University, located in Ettrick).