Communication (from Latin commūnicāre, meaning "to share"[1]) is the purposeful activity of information exchange between two or more participants in order to convey or receive the intended meanings through a shared system of signs and semiotic rules. The basic steps of communication are the forming of communicative intent, message composition, message encoding, transmission of signal, reception of signal, message decoding and finally interpretation of the message by the recipient.

Nonverbal communication describes the process of conveying meaning in the form of non-word messages. Examples of nonverbal communication include haptic communication, chronemic communication, gestures, body language, facial expression, eye contact, and how one dresses. Speech also contains nonverbal elements known as paralanguage, e.g. rhythm, intonation, tempo, and stress. There may even be a pheromone component. Research has shown that up to 55% of human communication may occur through non-verbal facial expressions, and a further 38% through paralanguage.[3] It affects communication most at the subconscious level and establishes trust. Likewise, written texts include nonverbal elements such as handwriting style, spatial arrangement of words and the use of emoticons to convey emotion.

Nonverbal communication demonstrates one of Wazlawick's laws: You cannot not communicate. Once proximity has formed awareness, living creatures begin interpreting any signals received.[4] Some of the functions of Nonverbal Communication in humans are to complement and illustrate, to reinforce and emphasize, to replace and substitute, to control and regulate, to contradict the denotative message.

Effective verbal or spoken communication is dependent on a number of factors and cannot be fully isolated from other important interpersonal skills such as non-verbal communication, listening skills and clarification. Human language can be defined as a system of symbols (sometimes known as lexemes) and the grammars (rules) by which the symbols are manipulated. The word "language" also refers to common properties of languages. Language learning normally occurs most intensively during human childhood. Most of the thousands of human languages use patterns of sound or gesture for symbols which enable communication with others around them. Languages tend to share certain properties, although there are exceptions. There is no defined line between a language and a dialect. Constructed languages such as Esperanto, programming languages, and various mathematical formalism is not necessarily restricted to the properties shared by human languages. Communication is two-way process not merely one-way.

Written communication and its historical development

Over time the forms of and ideas about communication have evolved through the continuing progression of technology. Advances include communications psychology and media psychology, an emerging field of study.

Communication is thus a process by which meaning is assigned and conveyed in an attempt to create shared understanding. Gregory Bateson called it "the replication of tautologies in the universe.[7] This process, which requires a vast repertoire of skills in interpersonal processing, listening, observing, speaking, questioning, analyzing, gestures, and evaluating enables collaboration and cooperation.[8]

Misunderstandings can be anticipated and solved through formulations, questions and answers, paraphrasing, examples, and stories of strategic talk. Written communication can be clarified by planning follow-up talks on critical written communication as part of the everyday way of doing business. A few minutes spent talking in the present will save valuable time later by avoiding misunderstandings in advance. A frequent method for this purpose is reiterating what one heard in one's own words and asking the other person if that really was what was meant (paraphrasing).[9]

Companies with limited resources may only choose to engage in a few of these activities while larger organizations may employ a full spectrum of communications. Since it is difficult to develop such a broad range of skills, communications professionals often specialize in one or two of these areas but usually have at least a working knowledge of most of them. By far, the most important qualifications communications professionals can possess are excellent writing ability, good 'people' skills, and the capacity to think critically and strategically.

Barriers to effective communication can retard or distort the message and intention of the message being conveyed which may result in failure of the communication process or an effect that is undesirable. These include filtering, selective perception, information overload, emotions, language, silence, communication apprehension, gender differences and political correctness[10]

This also includes a lack of expressing "knowledge-appropriate" communication, which occurs when a person uses ambiguous or complex legal words, medical jargon, or descriptions of a situation or environment that is not understood by the recipient.

Fear of being criticized is a major factor that prevents good communication. If we exercise simple practices to improve our communication skill, we can become effective communicators. For example, read an article from the newspaper or collect some news from the television and present it in front of the mirror. This will not only boost your confidence, but also improve your language and vocabulary.

Every information exchange between living organisms — i.e. transmission of signals that involve a living sender and receiver can be considered a form of communication; and even primitive creatures such as corals are competent to communicate. Nonhuman communication also include cell signaling, cellular communication, and chemical transmissions between primitive organisms like bacteria and within the plant and fungal kingdoms.

Communication is observed within the plant organism, i.e. within plant cells and between plant cells, between plants of the same or related species, and between plants and non-plant organisms, especially in the root zone. Plant roots communicate with rhizome bacteria, fungi, and insects within the soil. These interactions are governed by syntactic, pragmatic, and semantic rules,[citation needed] and are possible because of the decentralized "nervous system" of plants. The original meaning of the word "neuron" in Greek is "vegetable fiber" and recent research has shown that most of the microorganism plant communication processes are neuron-like.[16] Plants also communicate via volatiles when exposed to herbivory attack behavior, thus warning neighboring plants.[17] In parallel they produce other volatiles to attract parasites which attack these herbivores. In stress situations plants can overwrite the genomes they inherited from their parents and revert to that of their grand- or great-grandparents.[citation needed]

Fungi communicate to coordinate and organize their growth and development such as the formation of Marcelia and fruiting bodies. Fungi communicate with their own and related species as well as with non fungal organisms in a great variety of symbiotic interactions, especially with bacteria, unicellular eukaryote, plants and insects through biochemicals of biotic origin. The biochemicals trigger the fungal organism to react in a specific manner, while if the same chemical molecules are not part of biotic messages, they do not trigger the fungal organism to react. This implies that fungal organisms can differentiate between molecules taking part in biotic messages and similar molecules being irrelevant in the situation. So far five different primary signalling molecules are known to coordinate different behavioral patterns such as filamentation, mating, growth, and pathogenicity. Behavioral coordination and production of signaling substances is achieved through interpretation processes that enables the organism to differ between self or non-self, a biotic indicator, biotic message from similar, related, or non-related species, and even filter out "noise", i.e. similar molecules without biotic content.[18]

Communication is not a tool used only by humans, plants and animals, but it is also used by microorganisms like bacteria. The process is called quorum sensing. Through quorum sensing, bacteria are able to sense the density of cells, and regulate gene expression accordingly. This can be seen in both gram positive and gram negative bacteria. This was first observed by Fuqua et al. in marine microorganisms like V. harveyi and V. fischeri.[19] 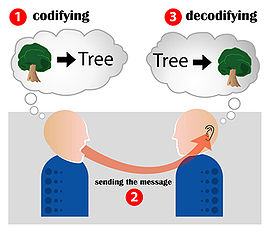 The first major model for communication was introduced by Claude Shannon and Warren Weaver for Bell Laboratories in 1949[20] The original model was designed to mirror the functioning of radio and telephone technologies. Their initial model consisted of three primary parts: sender, channel, and receiver. The sender was the part of a telephone a person spoke into, the channel was the telephone itself, and the receiver was the part of the phone where one could hear the other person. Shannon and Weaver also recognized that often there is static that interferes with one listening to a telephone conversation, which they deemed noise.

In a simple model, often referred to as the transmission model or standard view of communication, information or content (e.g. a message in natural language) is sent in some form (as spoken language) from an emisor/ sender/ encoder to a destination/ receiver/ decoder. This common conception of communication simply views communication as a means of sending and receiving information. The strengths of this model are simplicity, generality, and quantifiability. Claude Shannon and Warren Weaver structured this model based on the following elements:

Shannon and Weaver argued that there were three levels of problems for communication within this theory.

The technical problem: how accurately can the message be transmitted?
The semantic problem: how precisely is the meaning 'conveyed'?
The effectiveness problem: how effectively does the received meaning affect behavior?

Communication is usually described along a few major dimensions: Message (what type of things are communicated), source / emisor / sender / encoder (by whom), form (in which form), channel (through which medium), destination / receiver / target / decoder (to whom), and Receiver. Wilbur Schram (1954) also indicated that we should also examine the impact that a message has (both desired and undesired) on the target of the message.[23] Between parties, communication includes acts that confer knowledge and experiences, give advice and commands, and ask questions. These acts may take many forms, in one of the various manners of communication. The form depends on the abilities of the group communicating. Together, communication content and form make messages that are sent towards a destination. The target can be oneself, another person or being, another entity (such as a corporation or group of beings).

Communication can be seen as processes of information transmission governed by three levels of semiotic rules:

In a slightly more complex form a sender and a receiver are linked reciprocally. This second attitude of communication, referred to as the constitutive model or constructionist view, focuses on how an individual communicates as the determining factor of the way the message will be interpreted. Communication is viewed as a conduit; a passage in which information travels from one individual to another and this information becomes separate from the communication itself. A particular instance of communication is called a speech act. The sender's personal filters and the receiver's personal filters may vary depending upon different regional traditions, cultures, or gender; which may alter the intended meaning of message contents. In the presence of "communication noise" on the transmission channel (air, in this case), reception and decoding of content may be faulty, and thus the speech act may not achieve the desired effect. One problem with this encode-transmit-receive-decode model is that the processes of encoding and decoding imply that the sender and receiver each possess something that functions as a codebook, and that these two code books are, at the very least, similar if not identical. Although something like code books is implied by the model, they are nowhere represented in the model, which creates many conceptual difficulties.

Theories of coregulation describe communication as a creative and dynamic continuous process, rather than a discrete exchange of information. Canadian media scholar Harold Innis had the theory that people use different types of media to communicate and which one they choose to use will offer different possibilities for the shape and durability of society (Wark, McKenzie 1997). His famous example of this is using ancient Egypt and looking at the ways they built themselves out of media with very different properties stone and papyrus. Papyrus is what he called 'Space Binding'. it made possible the transmission of written orders across space, empires and enables the waging of distant military campaigns and colonial administration. The other is stone and 'Time Binding', through the construction of temples and the pyramids can sustain their authority generation to generation, through this media they can change and shape communication in their society (Wark, McKenzie 1997).

In any communication model, noise is interference with the decoding of messages sent over a channel by an encoder. There are many examples of noise: