Communist symbolism represents a variety of themes, including revolution, the proletariat, peasantry, agriculture, or international solidarity. Communist states, parties and movements use these symbols to advance and create solidarity within their cause.

Usually these symbols, along with a pentangle representing either the five inhabited continents (in the context of the six-continent model where Eurasia is counted as a single continent) or the five components of communist society (the peasants, the workers, the army, the intellectuals, and the youth), appear in yellow on a red background representing revolution. The flag of the Soviet Union incorporated a yellow-outlined red star and a yellow hammer and sickle on red. The flags of Vietnam, China, Angola, and Mozambique would all incorporate similar symbolism under communist rule.

The hammer and sickle have become the pan-communist symbol, appearing on the flags of most communist parties around the world. However, the flag of the Workers' Party of Korea includes a hammer representing industrial workers, a hoe representing agricultural workers, and a brush (traditional writing-implement) representing the intelligentsia.

In Hungary,[1] Latvia, Georgia, Indonesia, Poland, Ukraine, Estonia, Moldova and Lithuania, communist symbols are banned, and if displayed in public for non-educational uses are considered a criminal offense.[2]

The five-pointed red star is a symbol of communism as well as broader socialism in general. The red star was a revolutionary symbol after the October Revolution and following civil war in Russia. It was widely used by anti-fascist resistance parties and underground organizations in Europe leading up to and during the Second World War. During the war, the red star was prominently used as a symbol of the Workers' and Peasants' Red Army from the Soviet Union, which liberated its country from the invading forces of Nazi Germany and went on to rid the rest of Eastern Europe from the fascist occupation forces, achieving absolute victory and ending the war at the Battle of Berlin. In what was later dubbed the "Eastern Bloc," fascist dictatorships overthrown by the Red Army invasion were replaced by socialist states that were politically loyal to the Soviet Union, while countries in Western Europe remained economically dominated by the monetary institutions of the capitalist world. Most states in the Eastern Bloc incorporated the red star into state symbols to signify their socialist nature.

While there is no known original allegory behind the red star beyond being a universal political symbol, in the Soviet Union, the red star gained a more precise symbolism as representing the Communist Party, and its position on the flag over the united hammer and sickle symbolised the party leading the Soviet working class in the building of communism. Today the red star is used by many socialist and communist parties and organizations across the world.

The red flag is often seen in combination with other communist symbols and party names. The flag is used at various communist and socialist rallies like May Day, or used in a red bloc. The flag, being a symbol of socialism itself, is also commonly associated with non-communist variants of socialism.

The red and black flag has been a symbol of general communist movements, usually anarchist. The flag was used as the symbol of the Anarcho-syndicalists during the Spanish Civil War. The black represents anarchism and the red represents leftist ideals.[3] Over time the flag spilled into statist leftist movements, these movements include the Sandanistas and the 26th of July Movement, where the flags colors are not divided diagonally but horizontally. As in the case of the Sandanistas they adopted the flag due to the movements Anarchist roots.[4]

The Internationale is an anthem of the socialist movement. It is one of the most universally recognised songs in the world and has been translated into nearly every spoken language. Its original French refrain is C'est la lutte finale / Groupons-nous et demain / L'Internationale / Sera le genre humain (English: This is the final struggle / Let's group together and tomorrow / The International / Will be the human race). It is often sung with a raised fist salute.

The song has been used by communists all over the world since it was composed in the 19th Century and adopted as the official anthem of the Second International. It later became the anthem of Soviet Russia in 1918 and of the USSR in 1922. It was superseded as the Union anthem in 1944 with the adoption of the State Anthem of the Soviet Union, which places more emphasis on patriotism. The song was also sung in defiance to self-proclaimed socialist governments, such as in the German Democratic Republic in 1989 prior to reunification as well as in the People's Republic of China during the Tienanmen Square protests of the same year.

Although not an exclusively Communist symbol this is a symbol of Irish Socialism that may have the same roots as the original Hammer and Plough that was replaced by the Hammer and Sickle in Russia. The significance of the banner was that a free Workers Republic of Ireland would control its own destiny from the plough to the stars and the sword forged into the plough would mean the redundancy of war with the establishment of a Socialist International. The flag depicts the part of the constellation of Ursa Major that is known as The Plough in Ireland and Great Britain The Plough is one of the most prominent features of the night sky over Ireland throughout the year.

This was unveiled in 1914 and flown by a Socialist Workers Militia, The Irish Citizen Army, during the 1916 Easter Rising. 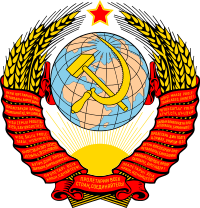 Soviet leaders sought to distinguish their insignia from the emblems used by the Russian Emperor and aristocracy. They replaced and omitted the traditional heraldic devices, substituting an emblem that did not conform to traditional European practices.

Many communist governments purposely diverged from the traditional forms of European heraldry in order to distance themselves from the monarchies that they usually replaced, with actual coats of arms being seen as symbols of the monarchs. In stead, they followed the pattern of the national emblems adopted in the late 1910s and early 1920s in Soviet Russia and the Soviet Union.

The following graphic elements, while not necessarily communist in nature, are often incorporated into the flags, seals and propaganda of communist countries and movements.

Notable examples of communist states that use no overtly communist imagery on their flags, crests or other graphic representations are Cuba, and the former People's Republic of Poland.

Examples of theses symbols in use. 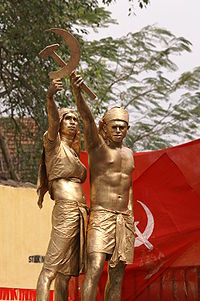 A tableau in a communist rally in Kerala, India, showing two farmers forming the hammer and sickle, the most famous communist symbol.