In continuum mechanics, a compatible deformation (or strain) tensor field in a body is that unique field that is obtained when the body is subjected to a continuous, single-valued, displacement field. Compatibility is the study of the conditions under which such a displacement field can be guaranteed. Compatibility conditions are particular cases of integrability conditions and were first derived for linear elasticity by Barré de Saint-Venant in 1864 and proved rigorously by Beltrami in 1886.[1]

In the continuum description of a solid body we imagine the body to be composed of a set of infinitesimal volumes or material points. Each volume is assumed to be connected to its neighbors without any gaps or overlaps. Certain mathematical conditions have to be satisfied to ensure that gaps/overlaps do not develop when a continuum body is deformed. A body that deforms without developing any gaps/overlaps is called a compatible body. Compatibility conditions are mathematical conditions that determine whether a particular deformation will leave a body in a compatible state.[2]

In the context of infinitesimal strain theory, these conditions are equivalent to stating that the displacements in a body can be obtained by integrating the strains. Such an integration is possible if the Saint-Venant's tensor (or incompatibility tensor)

vanishes in a simply-connected body[3] where

is the infinitesimal strain tensor and

For finite deformations the compatibility conditions take the form

is the deformation gradient.

The compatibility conditions in linear elasticity are obtained by observing that there are six strain-displacement relations that are functions of only three unknown displacements. This suggests that the three displacements may be removed from the system of equations without loss of information. The resulting expressions in terms of only the strains provide constraints on the possible forms of a strain field.

For two-dimensional, plane strain problems the strain-displacement relations are

Therefore there are six different compatibility conditions. We can write these conditions in index notation as[4]

is the permutation symbol. In direct tensor notation

For solids in which the deformations are not required to be small, the compatibility conditions take the form

is the deformation gradient. In terms of components with respect to a Cartesian coordinate system we can write these compatibility relations as

is the Christoffel symbol of the second kind. The quantity

represents the mixed components of the Riemann-Christoffel curvature tensor.

The problem of compatibility in continuum mechanics involves the determination of allowable single-valued continuous fields on simply connected bodies. More precisely, the problem may be stated in the following manner.[5] 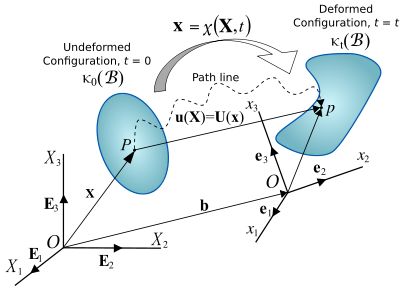 Figure 1. Motion of a continuum body.

Consider the deformation of a body shown in Figure 1. If we express all vectors in terms of the reference coordinate system

, the displacement of a point in the body is given by

What conditions on a given second-order tensor field

For the necessary conditions we assume that the field 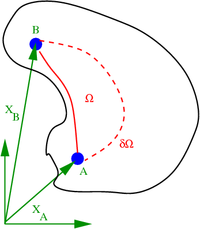 To prove that this condition is sufficient to guarantee existence of a compatible second-order tensor field, we start with the assumption that a field

. We will integrate this field to find the vector field

along a line between points

If the vector field

From Stokes theorem, the integral of a second order tensor along a closed path is given by

Using the assumption that the curl of

is zero, we get

field, provided that the body is simply connected.

Compatibility of the deformation gradient

field over a simply connected body are

The compatibility problem for small strains can be stated as follows.

when is it possible to construct a vector field

Suppose that there exists

such that the expression for

is continuously differentiable we have

The above are necessary conditions. If

is the infinitesimal rotation vector then

. Hence the necessary condition may also be written as

Let us now assume that the condition

is satisfied in a portion of a body. Is this condition sufficient to guarantee the existence of a continuous, single-valued displacement field

is uniquely defined. To do that we integrate

Note that we need to know a reference

to fix the rigid body rotation. The field

is uniquely defined which implies that the infinitesimal rotation tensor

is also uniquely defined, provided the body is simply connected.

. As before we integrate the displacement gradient

From Stokes' theorem and using the relations

is also determined uniquely. Hence the compatibility conditions are sufficient to guarantee the existence of a unique displacement field

in a simply-connected body.

The compatibility problem for the Right Cauchy-Green deformation field can be posed as follows.

be a positive definite symmetric tensor field defined on the reference configuration. Under what conditions on

does there exist a deformed configuration marked by the position field

Suppose that a field

exists that satisfies condition (1). In terms of components with respect to a rectangular Cartesian basis

From finite strain theory we know that

. Hence we can write

From the relation between of

Then, from the relation

From finite strain theory we also have

Again, using the commutative nature of the order of differentiation, we have

From the definition of

we observe that it is invertible and hence cannot be zero. Therefore,

We can show these are the mixed components of the Riemann-Christoffel curvature tensor. Therefore the necessary conditions for

-compatibility are that the Riemann-Christoffel curvature of the deformation is zero.

The proof of sufficiency is a bit more involved.[5][6] We start with the assumption that

We have to show that there exist

From a theorem by T.Y.Thomas [7] we know that the system of equations

over simply connected domains if

The first of these is true from the defining of

and the second is assumed. Hence the assumed condition gives us a unique

Next consider the system of equations

and the body is simply connected there exists some solution

to the above equations. We can show that the

also satisfy the property that

We can also show that the relation

is invertible and the constructed tensor field satisfies the expression for