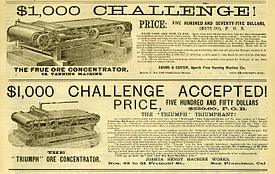 Adjacent advertisements in an 1885 newspaper for the makers of two competing ore concentrators (machines that separate out valuable ores from undesired minerals). The lower ad touts that their price is lower, and that their machine's quality and efficiency was demonstrated to be higher, both of which are general means of economic competition.

In economics, competition is the rivalry among sellers trying to achieve such goals as increasing profits, market share, and sales volume by varying the elements of the marketing mix: price, product, distribution, and promotion. Merriam-Webster defines competition in business as "the effort of two or more parties acting independently to secure the business of a third party by offering the most favorable terms."[1] It was described by Adam Smith in The Wealth of Nations (1776) and later economists as allocating productive resources to their most highly valued uses[2] and encouraging efficiency. Smith and other classical economists before Cournot were referring to price and non-price rivalry among producers to sell their goods on best terms by bidding of buyers, not necessarily to a large number of sellers nor to a market in final equilibrium.[3]

Competition is generally accepted as a necessary condition for the coordination of disparate individuals interests via the market process.[4]

Competition is seen as a state which produces gains for the whole economy, through promoting consumer sovereignty.[citation needed]

Competition is widespread throughout the market process. It is a condition where "buyers tend to compete with other buyers, and sellers tend to compete with other sellers."[4] In offering goods for exchange, buyers competitively bid to purchase specific quantities of specific goods which are available, or might be available if sellers were to choose to offer such goods. Similarly, sellers bid against other sellers in offering goods on the market, competing for the attention and exchange resources of buyers. Competition results from scarcity—there is never enough to satisfy all conceivable human wants—and occurs "when people strive to meet the criteria that are being used to determine who gets what."[4]

Competition may also lead to wasted (duplicated) effort and to increased costs (and prices) in some circumstances. In a small number of goods and services, the cost structure means that competition may be inefficient. These situations are known as natural monopoly and are usually publicly provided or tightly regulated.[citation needed]

Competition does not necessarily have to be between companies. For example, business writers sometimes refer to "internal competition". This is competition within companies. The idea was first introduced by Alfred Sloan at General Motors in the 1920s.[citation needed] Sloan deliberately created areas of overlap between divisions of the company so that each division would be competing with the other divisions. For example, the Chevy division would compete with the Pontiac division for some market segments. Also, in 1931, Procter & Gamble initiated a deliberate system of internal brand versus brand rivalry. The company was organized around different brands, with each brand allocated resources, including a dedicated group of employees willing to champion the brand. Each brand manager was given responsibility for the success or failure of the brand and was compensated accordingly. This form of competition thus pitted a brand against another brand. Finally, most businesses also encourage competition between individual employees.[citation needed] An example of this is a contest between sales representatives. The sales representative with the highest sales (or the best improvement in sales) over a period of time would gain benefits from the employer.

It should also be noted that business and economic competition in most countries is often limited or restricted.[citation needed] Competition often is subject to legal restrictions. For example, competition may be legally prohibited as in the case with a government monopoly or a government-granted monopoly. Tariffs or other protectionist measures may also be instituted by government in order to prevent or reduce competition. Depending on the respective economic policy, the pure competition is to a greater or lesser extent regulated by competition policy and competition law. Competition between countries is quite subtle to detect, but is quite evident in the World economy, where countries the US, Japan, the constituents of the European Union, China and the East Asian Tigers each try to outdo the other in the quest for economic supremacy in the global market, harkening to the concept of Kiasuism.[citation needed]Such competition is evident by the policies undertaken by these countries to educate the future workforce. For example, East Asian economies like Singapore, Japan and South Korea tend to emphasize education by allocating a large portion of the budget to this sector, and by implementing programmes such as gifted education,[citation needed] which some detractors[who?] criticise as indicative of academic elitism.

Within competitive markets, markets are often defined by their sub-sectors, such as the "short-term" or "long-term" market, the "seasonal" or "summer" market, or the "broad" or "remainder" market. For example, in otherwise competitive market economies, where a large majority of the commercial exchanges are competitively determined by long term contracts and therefore long term market clearing prices, a “remainder market” is one where prices are determined by the small part of the market that deals with the availability of whatever is not cleared via long term transactions. For example, in the sugar industry, about 94% to 95% of the market clearing price is determined by long term supply and purchase contracts. The balance of the market, and world sugar prices, are determined by the ad hoc demand for the 5% to 6% that is not sold via long term contracts; prices in the “remainder market” fluctuate more widely and are determined by short term supply and demand conditions; quoted prices can be significantly higher or lower than the long term market clearing price. Similarly, in the US real estate housing market, appraisal prices can be determined by both short term or long term characteristics depending on short term supply and demand factors; this can result in large price variations for a property at one location.[citation needed]

Main article: Anti-competitive practices
File:ATF policy.jpg
The printing equipment company ATF explicitly states in its 1923 manual that its goal is to 'discourage unhealthy competition' in the printing industry.

A practice is anti-competitive if it is deemed to unfairly distort free and effective competition in the marketplace. Examples include cartelization (collusion among companies producing the same product or services to fix the price of goods or services intended to mutual higher profit), restrictive trading agreements, predatory pricing, and abuse of a dominant position.[6]