From Infogalactic: the planetary knowledge core
(Redirected from Comprehension of Idioms)
Jump to: navigation, search

Comprehension of idioms is the act of processing and understanding idioms. Idioms are a common type of figure of speech. Based on common linguistic definitions, an idiom is a combination of words that contains a meaning that cannot be understood based on the literal definition of the individual words.[1] An example of an idiom is hit the sack, which means to go to bed. It can be used in a sentence like the following: I'm so exhausted that I'm going to hit the sack now.

Recent neurolinguistic research has found, using various techniques, several neural substrates that are associated with idiom comprehension, such as the left temporal lobe and prefrontal cortex.

Non-compositional models in general assume that idioms are stored like long words in memory.[2] For example, the entire phrase kick the bucket is represented by the meaning to die. The words kick and bucket separately do not contribute to the idiomatic meaning. Since individual words do not matter in an idiomatic expression, they are thought to be processed together as one entity during comprehension. In contrast, processing a literal expression requires the meaning of each word to be derived and then perceived in relation to the other words in the phrase. Non-compositional models include the literal first hypothesis, lexical representation hypothesis, and the direct access hypothesis.

There are several criticisms for the non-compositional models. First, studies demonstrated that idiom expressions are not processed more slowly than literal expression. In fact, it is often the opposite, which is in contrary to the prediction of literal first hypothesis. Second, idioms have been found to be more than just “frozen phrases” or long words. For example, some idioms can be transformed to some extent and still be recognized and understood. For example, spill the beans can be used as “the beans were spilt by Mary”. This is possible because spill the bean can be mapped on the meaning “reveal the secret”, i.e. spill (reveal) and beans (secret). Such idiom shows that the internal structure of the word string matters during comprehension. The meaning of some idioms, like play with fire, can be also inferred from literal interpretation of their components (i.e. to do something dangerous). These findings reveal that idioms are not a homogeneous, distinct group and thus may not involve different processing strategies from those for literal expressions.[6]

Compositional models assume that idiom comprehension uses normal language processing.[2] When an idiomatic expression is encountered, it is processed incrementally like a normal expression. Components of an idiomatic word string contribute to a figurative meaning in either a literal or metaphorical way. Compositional models include the configurational hypothesis and the conceptual metaphor hypothesis.

The prediction of the configurational hypothesis was not supported by research findings. Researchers found that even after a word string is recognized as an idiom, its literal meaning is still activated. Another criticism of the compositional models concerns the role of familiarity in idiom comprehension. As discovered by research on non-compositional models, idiomatic expressions are processed faster than non-idiomatic expressions. This is likely due to people’s familiarity of idioms. This suggests that when highly familiar idioms are encountered, people may not need to engage in literal processing or utilize conceptual metaphor to infer their meanings.[6]

Many factors have an effect on the comprehension of idioms. They can influence the processing speed and understandability of the idioms. Some of these factors include the familiarity, transparency, and context of use of the idioms.[1]

Idiom familiarity is typically defined as how frequently an idiom is encountered in a language community. Subjective ratings of idiom familiarity are usually obtained from members of the language community. An example of a more familiar English idiom is pain in the neck, while a less familiar idiom is paddle his own canoe. Research demonstrated that familiar idioms are processed quicker and more accurately than unfamiliar ones.[10] As the dual idiom representation model suggests, highly familiar idioms may lead to direct memory retrieval. Processing unfamiliar idioms, on the other head, requires contextual information and commonsense knowledge.

Research in children highlighted the important effects of context on idiom comprehension. It was found that children understand idiomatic expression more accurately when they are shown in informative contexts than when they are presented in isolation.[11] When they are encountered out of context, children tended to interpret idioms literally. The ability to use contextual information in language processing has also been found to influence children’s performance in idiom comprehension. Adults, however, are more affected by the familiarity of the idiom.

Since aphasic patients often preserve their ability to use familiar phrases (i.e. idioms and proverbs), researchers hypothesized that they may be stored and processed in different brain regions than novel phrases. It was found that patients who experienced right-brain damage (RBD) showed more impairment in idiom comprehension than patients with left-brain damage (LBD). RBD patients however performed better in comprehending novel sentence compared to patients with LBD.[12] This suggests that the right hemisphere is involved in the comprehension of idioms. However, later research has suggested that RBD patients’ difficulties in idiom comprehension, as demonstrated by sentence-to-picture matching task, may be due to deficits in their visuospatial abilities, rather than impairment in linguistic processing. The right hemisphere shows dominance in visuospatial processing.[13] 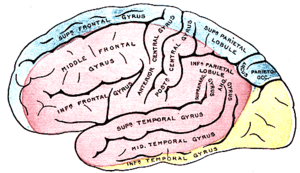 Other researchers have hypothesized that comprehension of nondecomposable idioms mainly involved left hemispheric activity. When healthy adults were studied, left temporal rTMS was found to influence the reaction time and accuracy of both idiom comprehension and literal sentence processing. In particular, it increased processing time and reduced accuracy in understanding. When rTMS was applied to the left frontal, right frontal and right temporal, there were no effects on idiom comprehension.[14] Recent research with healthy adults using fMRI also found that, when processing idioms that were not literally interpretable (i.e., raining cats and dogs), the Broca’s area in the left prefronto-temporal network was activated. However, when literally interpretable idioms (i.e., break the ice) were processed, the left medial frontal gyrus (MFQ) and superior frontal gyrus (SFG) were activated.[15]

Future research in this field should continue to investigate which brain regions are associated with idiom processing, in order to resolve the ongoing debate on hemispheric specialization in figurative language comprehension.[17] A recent review suggested that the familiarity affect which brain region is activated during the comprehension of figurative language. Less familiar expressions are suggested to be processed in the right hemisphere, while more familiar ones are processed predominately in the left hemisphere. More brain imaging research needs to be conducted to test this hypothesis.

Additionally, future research could use magnetoencephalography (MEG) to explore the temporal dynamics of idiom comprehension. Recent research using MEG has found that, when idioms containing action verbs (i.e. kick the bucket) were processed, motor regions of the brain were activated. The anterior fronto-temporal cortex, a region previously found to distinguish between literal and figurative processing, was activated at the same time as well. This suggests that literal and figurative meanings are processed in parallel to some extent, which gives support to the configurational hypothesis.[18] More work with MEG should be done to verify these findings.