Computational biology is different from biological computation, which is a subfield of computer science and computer engineering using bioengineering and biology to build computers, but is similar to bioinformatics, which is an interdisciplinary science using computers to store and process biological data.

Bioinformatics began to develop in the early 1970s. It was considered the science of analyzing informatics processes of various biological systems. At this time, research in artificial intelligence was using network models of the human brain in order to generate new algorithms. This use of biological data to develop other fields pushed biological researchers to revisit the idea of using computers to evaluate and compare large data sets. By 1982, information was being shared amongst researchers through the use of punch cards. The amount of data being shared began to grow exponentially by the end of the 1980s. This required the development of new computational methods in order to quickly analyze and interpret relevant information.[3]

Computational biology has been used to help sequence the human genome, create accurate models of the human brain, and assist in modeling biological systems.[3] 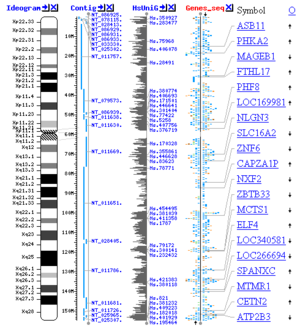 Computational genomics is a field within genomics which studies the genomes of cells and organisms. It is often referred to as Computational and Statistical Genetics. The Human Genome Project is one example of computational genomics. This project looks to sequence the entire human genome into a set of data. Once fully implemented, this could allow for doctors to analyze the genome of an individual patient.[7] This opens the possibility of personalized medicine, prescribing treatments based on an individual’s pre-existing genetic patterns. This project has created many similar programs. Researchers are looking to sequence the genomes of animals, plants, bacteria, and all other types of life.[8]

One of the main tools used in comparing the genomes is homology. Homology is observing the same organ across species and seeing what different functions they have. Research suggests that between 80 to 90% of sequences genes can be identified this way. In order to detect potential cures from genomes, comparisons between genome sequences of related species and mRNA sequences are drawn. This method is not completely accurate however. It may be necessary to include the genome of a primate in order to improve current methods of unique gene therapy.[8]

Computational neuroscience is the study of brain function in terms of the information processing properties of the structures that make up the nervous system. It is a subset of the field of neuroscience, and looks to analyze brain data to create practical applications.[9] It looks to model the brain in order to examine specific types aspects of the neurological system. Various types of models of the brain include:

It is the work of computational neuroscientists to improve the algorithms and data structures currently used to increase the speed of such calculations.

Computational pharmacology (from a computational biology perspective) is “the study of the effects of genomic data to find links between specific genotypes and diseases and then screening drug data”.[11] The pharmaceutical industry requires a shift in methods to analyze drug data. Pharmacists were able to use Microsoft Excel to compare chemical and genomic data related to the effectiveness of drugs. However, the industry has reached what is referred to as the Excel barricade. This arises from the limited number of cells accessible on a spreadsheet. This development led to the need for computational pharmacology. Scientists and researchers develop computational methods to analyze these massive data sets. This allows for an efficient comparison between the notable data points and allows for more accurate drugs to be developed.[12]

Analysts project that if major medications fail due to patents, that computational biology will be necessary to replace current drugs on the market. Doctoral students in computational biology are being encouraged to pursue careers in industry rather than take Post-Doctoral positions. This is a direct result of major pharmaceutical companies needing more qualified analysts of the large data sets required for producing new drugs.[12]

Computational biology has assisted the field of evolutionary biology in many capacities. This includes:

One method of representing this subfield of computational biology is through the use of trees. A tree is a data structure that splits nodes based on a predefined rule. This tree, developed by M.R. Hezinger, V. King, and T.Warnow implements traversal of evolutionary information in less than polynomial time. This is a particularly quick method, as opposed to some modern methods that take longer than O(n^2) time. These trees have multiple applications to questions in computational evolutionary biology.[14]

Cancer computational biology is a field that aims to determine the future mutations in cancer through an algorithmic approach to analyzing data. Research in this field has led to the use of high-throughput measurement. High throughput measurement allows for the gathering of millions of data points using robotics and other sensing devices. This data is collected from DNA, RNA, and other biological structures. Areas of focus include determining the characteristics of tumors, analyzing molecules that are deterministic in causing cancer, and understanding how the human genome relates to the causation of tumors and cancer.[15]

Computational Biologists use a wide range of software. These range from command line programs to graphical and web-based programs.

Computational biology: The development and application of data-analytical and theoretical methods, mathematical modeling and computational simulation techniques to the study of biological, behavioral, and social systems.[1]

Bioinformatics: Research, development, or application of computational tools and approaches for expanding the use of biological, medical, behavioral or health data, including those to acquire, store, organize, archive, analyze, or visualize such data.[1]

While each field is distinct, there may be significant overlap at their interface.[1]