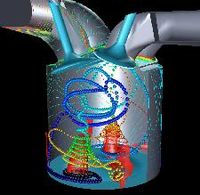 Simulation of an experimental engine

Not to be confused with computer engineering.

Computational science and engineering (CSE) is a relatively new discipline that deals with the development and application of computational models and simulations, often coupled with high-performance computing, to solve complex physical problems arising in engineering analysis and design (computational engineering) as well as natural phenomena (computational science). CSE has been described as the "third mode of discovery" (next to theory and experimentation).[1] In many fields, computer simulation is integral and therefore essential to business and research. Computer simulation provides the capability to enter fields that are either inaccessible to traditional experimentation or where carrying out traditional empirical inquiries is prohibitively expensive. CSE should neither be confused with pure computer science, nor with computer engineering, although a wide domain in the former is used in CSE (e.g., certain algorithms, data structures, parallel programming, high performance computing) and some problems in the latter can be modeled and solved with CSE methods (as an application area).

It is typically offered as a masters or doctorate program at several institutions.

Computational Science and Engineering methods and frameworks include:

With regard to computing, computer programming, algorithms, and parallel computing play a major role in CSE. The most widely used programming language in the scientific community is FORTRAN. Recently, C++ and C have increased in popularity over FORTRAN. Due to the wealth of legacy code in FORTRAN and its simpler syntax, the scientific computing community has been slow in completely adopting C++ as the lingua franca. Because of its very natural way of expressing mathematical computations, and its built-in visualization capacities, the proprietary language/environment MATLAB is also widely used, especially for rapid application development and model verification. Python along with external libraries (such as NumPy, SciPy, Matplotlib) has gain some popularity as a free and Copycenter alternative to MATLAB. 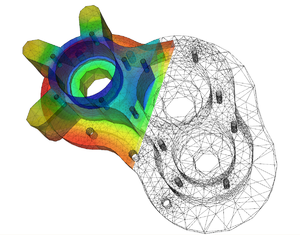 A numerical solution to the heat equation on a pump casing model using the finite element method.

Computational Science and Engineering finds diverse applications, including in: