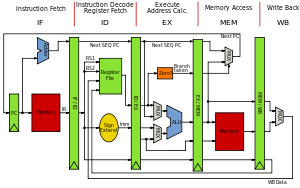 The first documented computer architecture was in the correspondence between Charles Babbage and Ada Lovelace, describing the analytical engine. Two other early and important examples were:

The term “architecture” in computer literature can be traced to the work of Lyle R. Johnson, Mohammad Usman Khan and Frederick P. Brooks, Jr., members in 1959 of the Machine Organization department in IBM’s main research center. Johnson had the opportunity to write a proprietary research communication about the Stretch, an IBM-developed supercomputer for Los Alamos Scientific Laboratory. To describe the level of detail for discussing the luxuriously embellished computer, he noted that his description of formats, instruction types, hardware parameters, and speed enhancements were at the level of “system architecture” – a term that seemed more useful than “machine organization.”

Computer architecture, like other architecture, is the art of determining the needs of the user of a structure and then designing to meet those needs as effectively as possible within economic and technological constraints.

Brooks went on to help develop the IBM System/360 (now called the IBM zSeries) line of computers, in which “architecture” became a noun defining “what the user needs to know”. Later, computer users came to use the term in many less-explicit ways.

The discipline of computer architecture has three main subcategories:[5]

Some architects at companies such as Intel and AMD use finer distinctions:

The purpose is to design a computer that maximizes performance while keeping power consumption in check, costs low relative to the amount of expected performance, and is also very reliable. For this, many aspects are to be considered which includes Instruction Set Design, Functional Organization, Logic Design, and Implementation. The implementation involves Integrated Circuit Design, Packaging, Power, and Cooling. Optimization of the design requires familiarity with Compilers, Operating Systems to Logic Design and Packaging.

An instruction set architecture (ISA) is the interface between the computer's software and hardware and also can be viewed as the programmer's view of the machine. Computers do not understand high level languages which have few, if any, language elements that translate directly into a machine's native opcodes. A processor only understands instructions encoded in some numerical fashion, usually as binary numbers. Software tools, such as compilers, translate high level languages, such as C, into instructions.

The ISA of a computer is usually described in a small book or pamphlet, which describes how the instructions are encoded. Also, it may define short (vaguely) mnenonic names for the instructions. The names can be recognized by a software development tool called an assembler. An assembler is a computer program that translates a human-readable form of the ISA into a computer-readable form. Disassemblers are also widely available, usually in debuggers, software programs to isolate and correct malfunctions in binary computer programs.

ISAs vary in quality and completeness. A good ISA compromises between programmer convenience (more operations can be better), cost of the computer to interpret the instructions (cheaper is better), speed of the computer (faster is better), and size of the code (smaller is better). For example, a single-instruction ISA is possible, inexpensive, and fast, (e.g., subtract and jump if zero. It was actually used in the SSEM), but it was not convenient or helpful to make programs small. Memory organization defines how instructions interact with the memory, and also how different parts of memory interact with each other.

Computer organization helps optimize performance-based products. For example, software engineers need to know the processing ability of processors. They may need to optimize software in order to gain the most performance at the least expense. This can require quite detailed analysis of the computer organization. For example, in a multimedia decoder, the designers might need to arrange for most data to be processed in the fastest data path.

Once an instruction set and micro-architecture are described, a practical machine must be designed. This design process is called the implementation. Implementation is usually not considered architectural definition, but rather hardware design engineering. Implementation can be further broken down into several (not fully distinct) steps:

The exact form of a computer system depends on the constraints and goals. Computer architectures usually trade off standards, power versus performance, cost, memory capacity, latency (latency is the amount of time that it takes for information from one node to travel to the source) and throughput. Sometimes other considerations, such as features, size, weight, reliability, and expandability are also factors.

The most common scheme does an in depth power analysis and figures out how to keep power consumption low, while maintaining adequate performance.

Modern computer performance is often described in IPC (instructions per cycle). This measures the efficiency of the architecture at any clock speed. Since a faster clock can make a faster computer, this is a useful, widely applicable measurement. Historic computers had IPC counts as low as 0.1 (See instructions per cycle). Simple modern processors easily reach near 1. Superscalar processors may reach three to five by executing several instructions per clock cycle. Multicore and vector processing CPUs can multiply this further by acting on a lot of data per instruction, which have several CPUs executing in parallel.

Historically, many people measured a computer's speed by the clock rate (usually in MHz or GHz). This refers to the cycles per second of the main clock of the CPU. However, this metric is somewhat misleading, as a machine with a higher clock rate may not necessarily have greater performance. As a result, manufacturers have moved away from clock speed as a measure of performance.

Other factors influence speed, such as the mix of functional units, bus speeds, available memory, and the type and order of instructions in the programs being run.

In a typical home computer, the simplest, most reliable way to speed performance is usually to add random access memory (RAM). More RAM increases the likelihood that needed data or a program is in RAM—so the system is less likely to need to move memory data from the disk. The disk is often ten thousand times slower than RAM because it has mechanical parts that must move to access its data.

There are two main types of speed: latency and throughput. Latency is the time between the start of a process and its completion. Throughput is the amount of work done per unit time. Interrupt latency is the guaranteed maximum response time of the system to an electronic event (e.g. when the disk drive finishes moving some data).

Performance is affected by a very wide range of design choices — for example, pipelining a processor usually makes latency worse (slower) but makes throughput better. Computers that control machinery usually need low interrupt latencies. These computers operate in a real-time environment and fail if an operation is not completed in a specified amount of time. For example, computer-controlled anti-lock brakes must begin braking within a predictable, short time after the brake pedal is sensed.

The performance of a computer can be measured using other metrics, depending upon its application domain. A system may be CPU bound (as in numerical calculation), I/O bound (as in a web hosted application) or memory bound (as in video editing). Power consumption has become important in servers, laptops, and mobile devices.

Benchmarking tries to take all these factors into account by measuring the time a computer takes to run through a series of test programs. Although benchmarking shows strengths, it may not help one to choose a computer. Often the measured machines split on different measures. For example, one system might handle scientific applications quickly, while another might render popular video games more smoothly. Furthermore, designers may target and add special features to their products, through hardware or software, that permit a specific benchmark to execute quickly but don't offer similar advantages to general tasks.

Power consumption is another measurement that is important in modern computers. Power efficiency can often be traded for speed or lower cost. The typical measurement in this case is MIPS/W (millions of instructions per second per watt).

Increases in publicly released clock-speeds have relatively grown slowly over the past few years, with respect to vast leaps in power consumption reduction and miniaturization demand. Compared to the exponential growth within the same preceding time frame, processing speeds have steady increased between 3 GHz (2006)-4 GHz (2014). A strong demand fueled by mobile technology has shifted focus into improving processing to achieve longer battery life and reductions in size. Significant reductions in power consumption, as much as 50% reported by Intel in their release of the Haswell (microarchitecture); where they dropped their target down to 10-20 watts vs 30-40 watts in the previous model. In addition, overall performance has improved through leveraging multi-core parallelism operations that can accomplish more responsive and efficient 'system-wide' through-put with less single-core cycles. By dividing the work among multiple cores, system architectures are achieving much greater 'perceived performance' without the requiring 8–10 GHz processors.