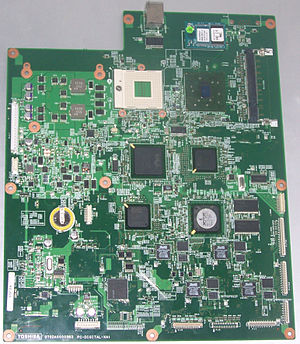 The motherboard used in a typical personal computer. The result of computer engineering efforts.

There are two major specialties in computer engineering: software and hardware.

There are many specialty areas in the field of computer engineering.

Those focusing on communications and wireless networks, work advancements in telecommunications systems and networks (especially wireless networks), modulation and error-control coding, and information theory. High-speed network design, interference suppression and modulation, design and analysis of fault-tolerant system, and storage and transmission schemes are all a part of this specialty.[9]

Computational Science and Engineering is a relatively new discipline. According to the Sloan Career Cornerstone Center, individuals working in this area, "computational methods are applied to formulate and solve complex mathematical problems in engineering and the physical and the social sciences. Examples include aircraft design, the plasma processing of nanometer features on semiconductor wafers, VLSI circuit design, radar detection systems, ion transport through biological channels, and much more".[9]

In this specialty, engineers build integrated environments for computing, communications, and information access. Examples include shared-channel wireless networks, adaptive resource management in various systems, and improving the quality of service in mobile and ATM environments. Some other examples include work on wireless network systems and fast Ethernet cluster wired systems.[9]

In this specialty, computer engineers focus on developing visual sensing technology to sense an environment, representation of an environment, and manipulation of the environment. The gathered three-dimensional information is then implemented to perform a variety of tasks. These include, improved human modeling, image communication, and human-computer interfaces, as well as devices such as special-purpose cameras with versatile vision sensors.[9] 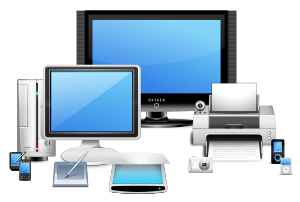 Individuals working in this area design technology for enhancing the speed, reliability, and performance of systems. Embedded systems are found in many devices from a small FM radio to the space shuttle. According to the Sloan Cornerstone Career Center, ongoing developments in embedded systems include "automated vehicles and equipment to conduct search and rescue, automated transportation systems, and human-robot coordination to repair equipment in space."[9]

This specialty of computer engineering requires adequate knowledge of electronics and electrical systems. Engineers working in this area work on enhancing the speed, reliability, and energy efficiency of next-generation very-large-scale integrated (VLSI) circuits and microsystems. An example of this specialty is work done on reducing the power consumption of VLSI algorithms and architecture.[9]

Computer engineers in this area develop improvements in human–computer interaction, including speech recognition and synthesis, medical and scientific imaging, or communications systems. Other work in this area includes computer vision development such as recognition of human facial features.[9]

Job outlook in the United States

According to the BLS, "employment of computer hardware engineers is expected to only increase 7% from 2012 to 2022 ("Slower than average" in their own words when compared to other occupations)[12] and is down from 9 percent in the BLS 2010 to 2020 estimate." Today, computer hardware is somehow equal to Electronic and Computer Engineering (ECE) and has divided to many subcategories, the most significant of them is Embedded system design.[8]