From Infogalactic: the planetary knowledge core
Jump to: navigation, search
For the TV programme, see The Computer Programme.

A computer program is a collection of instructions[1] that performs a specific task when executed by a computer. A computer requires programs to function, and typically executes the program's instructions in a central processing unit.[2]

A computer program is usually written by a computer programmer in a programming language. From the program in its human-readable form of source code, a compiler can derive machine code—a form consisting of instructions that the computer can directly execute. Alternatively, a computer program may be executed with the aid of an interpreter.

A part of a computer program that performs a well-defined task is known as an algorithm. A collection of computer programs, libraries and related data are referred to as software. Computer programs may be categorized along functional lines, such as application software or system software.

The earliest programmable machines preceded the invention of the digital computer. In 1801, Joseph-Marie Jacquard devised a loom that would weave a pattern by following a series of perforated cards. Patterns, including flowers and leaves, could be weaved and repeated by arranging the cards.[3] 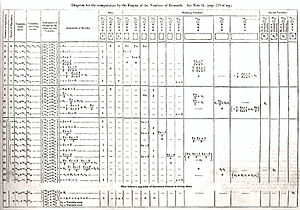 In 1837, Charles Babbage was inspired by Jacquard's loom to attempt to build the Analytical Engine.[3] The names of the components of the calculating device were borrowed from the textile industry. In the textile industry, yarn was brought from the store to be milled. The device would have had a "store"—memory to hold 1,000 numbers of 40 decimal digits each. Numbers from the "store" would then have then been transferred to the "mill" (analogous to the CPU of a modern machine), for processing. It was programmed using two sets of perforated cards—one to direct the operation and the other for the input variables.[3] [4] However, after more than 17,000 pounds of the British government's money, the thousands of cogged wheels and gears never fully worked together.[5]

During a nine-month period in 1842–43, Ada Lovelace translated the memoir of Italian mathematician Luigi Menabrea. The memoir covered the Analytical Engine. The translation contained Note G which completely detailed a method for calculating Bernoulli numbers using the Analytical Engine. This note is recognized by some historians as the world's first written computer program.[6]

In 1936, Alan Turing introduced the Universal Turing machine—a theoretical device that can model every computation that can be performed on a Turing complete computing machine.[7] It is a finite-state machine that has an infinitely long read/write tape. The machine can move the tape back and forth, changing its contents as it performs an algorithm. The machine starts in the initial state, goes through a sequence of steps, and halts when it encounters the halt state.[8] This machine is considered by some to be the origin of the stored-program computer—used by John von Neumann (1946) for the "Electronic Computing Instrument" that now bears the von Neumann architecture name.[9]

The Z3 computer, invented by Konrad Zuse (1941) in Germany, was a digital and programmable computer.[10] A digital computer uses electricity as the calculating component. The Z3 contained 2,400 relays to create the circuits. The circuits provided a binary, floating-point, nine-instruction computer. Programming the Z3 was through a specially designed keyboard and punched tape.

The Electronic Numerical Integrator And Computer (Fall 1945) was a Turing complete, general-purpose computer that used 17,468 vacuum tubes to create the circuits. At its core, it was a series of Pascalines wired together.[11] Its 40 units weighed 30 tons, occupied 1,800 square feet, and consumed $650 per hour (in 1940s currency) in electricity when idle.[11] It had 20 base-10 accumulators. Programming the ENIAC took up to two months.[11] Three function tables were on wheels and needed to be rolled to fixed function panels. Function tables were connected to function panels using heavy black cables. Each function table had 728 rotating knobs. Programming the ENIAC also involved setting some of the 3,000 switches. Debugging a program took a week.[11] The ENIAC featured parallel operations. Different sets of accumulators could simultaneously work on different algorithms. It used punched card machines for input and output, and it was controlled with a clock signal. It ran for eight years, calculating hydrogen bomb parameters, predicting weather patterns, and producing firing tables to aim artillery guns.

The Manchester Small-Scale Experimental Machine (June 1948) was a stored-program computer.[12] Programming transitioned away from moving cables and setting dials; instead, a computer program was stored in memory as numbers. Only three bits of memory were available to store each instruction, so it was limited to eight instructions. 32 switches were available for programming. 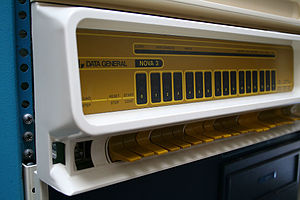 Switches for manual input on a Data General Nova 3, manufactured in the mid 1970s

Computers manufactured until the 1970s had front-panel switches for programming. The computer program was written on paper for reference. An instruction was represented by a configuration of on/off settings. After setting the configuration, an execute button was pressed. This process was then repeated. Computer programs also were manually input via paper tape or punched cards. After the medium was loaded, the starting address was set via switches and the execute button pressed.[13]

In 1961, the Burroughs B5000 was built specifically to be programmed in the ALGOL 60 language. The hardware featured circuits to ease the compile phase.[14]

In 1964, the IBM System/360 was a line of six computers each having the same instruction set architecture. The Model 30 was the smallest and least expensive. Customers could upgrade and retain the same application software.[15] Each System/360 model featured multiprogramming. With operating system support, multiple programs could be in memory at once. When one was waiting for input/output, another could compute. Each model also could emulate other computers. Customers could upgrade to the System/360 and retain their IBM 7094 or IBM 1401 application software.[15]

The sometimes lengthy process of computer programming is usually referred to as software development. The term software engineering is becoming popular as the process is seen as an engineering discipline. 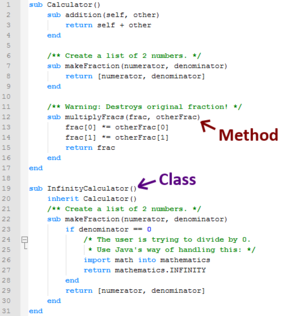 A computer program written in the imperative programming style

Computer programs can be categorized by the programming language paradigm used to produce them. Two of the main paradigms are imperative and declarative.

One criticism of imperative languages is the side effect of an assignment statement on a class of variables called non-local variables.[17]

Declarative programming languages describe what computation should be performed and not how to compute it. Declarative programs omit the control flow and are considered sets of instructions. Two broad categories of declarative languages are functional languages and logical languages. The principle behind functional languages (like Haskell) is to not allow side effects, which makes it easier to reason about programs like mathematical functions.[17] The principle behind logical languages (like Prolog) is to define the problem to be solved – the goal – and leave the detailed solution to the Prolog system itself.[18] The goal is defined by providing a list of subgoals. Then each subgoal is defined by further providing a list of its subgoals, etc. If a path of subgoals fails to find a solution, then that subgoal is backtracked and another path is systematically attempted.

A computer program in the form of a human-readable, computer programming language is called source code. Source code may be converted into an executable image by a compiler or executed immediately with the aid of an interpreter.

Compilers are used to translate source code from a programming language into either object code or machine code.[19] Object code needs further processing to become machine code, and machine code consists of the central processing unit's native instructions, ready for execution. Compiled computer programs are commonly referred to as executables, binary images, or simply as binaries – a reference to the binary file format used to store the executable code.

Interpreters are used to execute source code from a programming language immediately, without an intermediate file. The interpreter decodes each statement and performs its behavior. One advantage of interpreters is the ability to generate an interactive session. The programmer is presented with a prompt, and individual lines of code are typed in and performed immediately.

Either compiled or interpreted programs might be executed in a batch process without human interaction. Batch programming languages are called scripting languages. One common scripting language is Unix shell, and its executing environment is called the command-line interface.

No properties of a programming language require it to be exclusively compiled or exclusively interpreted. The categorization usually reflects the most popular method of language execution. For example, BASIC is thought of as an interpreted language and C a compiled language, despite the existence of BASIC compilers and C interpreters. 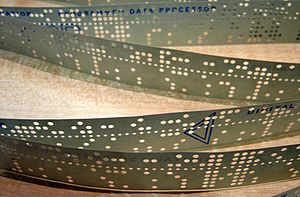 In the 1950s, computer programs were stored on perforated paper tape

Typically, computer programs are stored in non-volatile memory until requested either directly or indirectly to be executed by the computer user. Upon such a request, the program is loaded into random-access memory, by a computer program called an operating system, where it can be accessed directly by the central processor. The central processor then executes ("runs") the program, instruction by instruction, until termination. A program in execution is called a process.[20] Termination is either by normal self-termination or by error – software or hardware error.

Many operating systems support multitasking which enables many computer programs to appear to run simultaneously on one computer. Operating systems may run multiple programs through process scheduling – a software mechanism to switch the CPU among processes often so users can interact with each program while it runs.[21] Within hardware, modern day multiprocessor computers or computers with multicore processors may run multiple programs.[22]

A computer program in execution is normally treated as being different from the data the program operates on. However, in some cases, this distinction is blurred when a computer program modifies itself. The modified computer program is subsequently executed as part of the same program. Self-modifying code is possible for programs written in machine code, assembly language, Lisp, C, COBOL, PL/1, and Prolog. 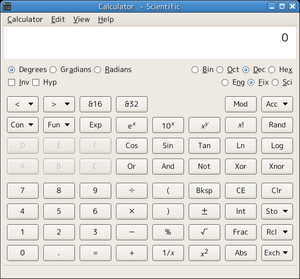 Example of an app: GCalctool, a software calculator

There are many types of application software:

An operating system is a computer program that acts as an intermediary between a user of a computer and the computer hardware. [23]

In the 1950s, the programmer, who was also the operator, would write a program and run it.[13] After the program finished executing, the output may have been printed, or it may have been punched onto paper tape or cards for later processing.[13] More often than not the program did not work. [24] The programmer then looked at the console lights and fiddled with the console switches. If less fortunate, a memory printout was made for further study.[24] In the 1960s, programmers reduced the amount of wasted time by automating the operator's job.[24] A program called an operating system was kept in the computer at all times.[24]

A stored-program computer requires an initial computer program stored in its read-only memory to boot. The boot process is to identify and initialize all aspects of the system, from processor registers to device controllers to memory contents.[25] Following the initialization process, this initial computer program loads the operating system and sets the program counter to begin normal operations. 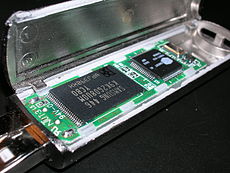 The microcontroller on the right of this USB flash drive is controlled with embedded firmware.

Independent of the host computer, a hardware device might have embedded firmware to control its operation. Firmware is used when the computer program is rarely or never expected to change, or when the program must not be lost when the power is off.[24]

Microcode programs control some central processing units and some other hardware. This code moves data between the registers, buses, arithmetic logic units, and other functional units in the CPU. Unlike conventional programs, microcode is not usually written by, or even visible to, the end users of systems, and is usually provided by the manufacturer, and is considered internal to the device.