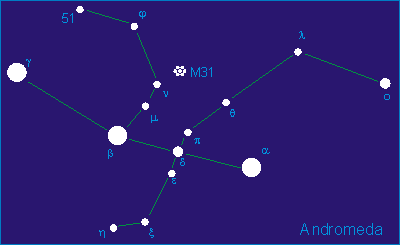 When an astronomer says "M31 is situated in the Andromeda," this does not assert a proximity of that galaxy to stars of the Andromeda constellation in the 3-dimensional space. This means: "turn your telescope towards Andromeda's stars to see M31"

A conceptual domain can be any coherent organization of human experience. The regularity with which different languages employ the same metaphors, which often appear to be perceptually based, has led to the hypothesis that the mapping between conceptual domains corresponds to neural mappings in the brain.[1][2]

This idea, and a detailed examination of the underlying processes, was first extensively explored by George Lakoff and Mark Johnson in their work Metaphors We Live By. Other cognitive scientists study subjects similar to conceptual metaphor under the labels "analogy", "conceptual blending" and "ideasthesia".

Conceptual metaphors are seen in language in our everyday lives. Conceptual metaphors shape not just our communication, but also shape the way we think and act. In George Lakoff and Mark Johnson’s work, Metaphors We Live By (1980), we see how everyday language is filled with metaphors we may not always notice. An example of one of the commonly used conceptual metaphors is "argument is war."[3] This metaphor shapes our language in the way we view argument as war or as a battle to be won. It is not uncommon to hear someone say "He won that argument" or "I attacked every weak point in his argument". The very way argument is thought of is shaped by this metaphor of arguments being war and battles that must be won. Argument can be seen in other ways than a battle, but we use this concept to shape the way we think of argument and the way we go about arguing.

There are two main roles for the conceptual domains posited in conceptual metaphors:

A mapping is the systematic set of correspondences that exist between constituent elements of the source and the target domain. Many elements of target concepts come from source domains and are not preexisting. To know a conceptual metaphor is to know the set of mappings that applies to a given source-target pairing. The same idea of mapping between source and target is used to describe analogical reasoning and inferences.[4]

Conceptual metaphors typically employ a more abstract concept as target and a more concrete or physical concept as their source. For instance, metaphors such as 'the days [the more abstract or target concept] ahead' or 'giving my time' rely on more concrete concepts, thus expressing time as a path into physical space, or as a substance that can be handled and offered as a gift. Different conceptual metaphors tend to be invoked when the speaker is trying to make a case for a certain point of view or course of action. For instance, one might associate "the days ahead" with leadership, whereas the phrase "giving my time" carries stronger connotations of bargaining. Selection of such metaphors tends to be directed by a subconscious or implicit habit in the mind of the person employing them.

The principle of unidirectionality states that the metaphorical process typically goes from the more concrete to the more abstract, and not the other way around. Accordingly, abstract concepts are understood in terms of prototype concrete processes. The term "concrete," in this theory, has been further specified by Lakoff and Johnson as more closely related to the developmental, physical neural, and interactive body (see embodied philosophy). One manifestation of this view is found in the cognitive science of mathematics, where it is proposed that mathematics itself, the most widely accepted means of abstraction in the human community, is largely metaphorically constructed, and thereby reflects a cognitive bias unique to humans that uses embodied prototypical processes (e.g. counting, moving along a path) that are understood by all human beings through their experiences.

Language and culture as mappings

In their 1980 work, Lakoff and Johnson closely examined a collection of basic conceptual metaphors, including:

The latter half of each of these phrases invokes certain assumptions about concrete experience and requires the reader or listener to apply them to the preceding abstract concepts of love or organizing in order to understand the sentence in which the conceptual metaphor is used.

There are numerous ways in which conceptual metaphors shape human perception and communication, especially in mass media and in public policy.

Lakoff and Johnson focus on English, and cognitive scholars writing in English have tended not to investigate the discourse of foreign languages in any great detail to determine the creative ways in which individuals negotiate, resist, and consolidate conceptual metaphors. Andrew Goatly in his book Washing the Brain (2007)[5] considers ideological conceptual metaphors as well as Chinese conceptual metaphors.

James W. Underhill, a modern Humboldtian scholar, attempts to reestablish Wilhelm von Humboldt's concern for the different ways languages frame reality, and the strategies individuals adopt in creatively resisting and modifying existing patterns of thought. Taking on board the Lakoff-Johnson paradigm of conceptual metaphor, he investigates the way in which Czech communists appropriated the concept of the people, the state and struggle, and the way German Communists harnessed concepts of eternity and purity. He also reminds us that, as Klemperer, the main critic of Hitlerdeutsch, demonstrates, resisting patterns of thought means engaging in conceptual metaphors and refusing the logic that ideologies impose upon them. In multilingual studies (based on Czech, German, French & English), Underhill considers how different cultures reformulate key concepts such as truth, love, hate and war.[6]

A less extreme, but similar, claim is made by George Lakoff in his book Moral Politics and his later book on framing, Don't Think of an Elephant!. Lakoff claims that the public political arena in America reflects a basic conceptual metaphor of 'the family.' Accordingly, people understand political leaders in terms of 'strict father' and 'nurturant mother' roles. Two basic views of political economy arise from this desire to see the nation-state act 'more like a father' or 'more like a mother.' He further amplified these views in his latest book, The Political Mind.

Urban theorist and ethicist Jane Jacobs made this distinction in less gender-driven if not wholly desexualizing terms by differentiating between a 'Guardian Ethic' and a 'Trader Ethic'.[7] She states that guarding and trading are two concrete activities that human beings must learn to apply metaphorically to all choices in later life. In a society where guarding children is the primary female duty and trading in a market economy is the primary male duty, Lakoff posits that children assign the 'guardian' and 'trader' roles to their mothers and fathers, respectively.

Both of these theories suggest that there may be a great deal of social conditioning and pressure to form specific cognitive bias. Anthropologists observe that all societies tend to have roles assigned by age and gender, which supports this view.

Lakoff and Jacobs both devote a significant amount of time to current events and political theory, suggesting that respected linguists and theorists of conceptual metaphor may tend to channel their theories into political activism. Indeed, if conceptual metaphors are as basic as Lakoff argues, they may literally have no choice in doing so.

Critics of this ethics-driven approach to language tend to accept that idioms reflect underlying conceptual metaphors, but that actual grammar, and the more basic cross-cultural concepts of scientific method and mathematical practice tend to minimize the impact of metaphors. Such critics tend to see Lakoff and Jacobs as 'left-wing figures,' and would not accept their politics as any kind of crusade against an ontology embedded in language and culture, but rather, as an idiosyncratic pastime, not part of the science of linguistics nor of much use. And others further, such as Deleuze and Guattari, Michel Foucault and, more recently, Manuel de Landa would criticize both of these two positions for mutually constituting the same old ontological ideology that would try to separate two parts of a whole that is greater than the sum of its parts.

Lakoff's 1987 work, Women, Fire, and Dangerous Things, answered some of these criticisms before they were even made: he explores the effects of cognitive metaphors (both culturally specific and human-universal) on the grammar per se of several languages, and the evidence of the limitations of the classical logical-positivist or Anglo-American School philosophical concept of the category usually used to explain or describe the scientific method. Lakoff's reliance on empirical scientific evidence, i.e. specifically falsifiable predictions, in the 1987 work and in Philosophy in the Flesh (1999) suggests that the cognitive-metaphor position has no objections to the scientific method, but instead considers the scientific method a finely developed reasoning system used to discover phenomena which are subsequently understood in terms of new conceptual metaphors (such as the metaphor of fluid motion for conducted electricity, which is described in terms of "current" "flowing" against "impedance," or the gravitational metaphor for static-electric phenomena, or the "planetary orbit" model of the atomic nucleus and electrons, as used by Niels Bohr).

Further, partly in response to such criticisms, Lakoff and Rafael E. Núñez, in 2000, proposed a cognitive science of mathematics that would explain mathematics as a consequence of, not an alternative to, the human reliance on conceptual metaphor to understand abstraction in terms of basic experiential concretes.

The Linguistic Society of America has argued that "the most recent linguistic approach to literature is that of cognitive metaphor, which claims that metaphor is not a mode of language, but a mode of thought. Metaphors project structures from source domains of schematized bodily or enculturated experience into abstract target domains. We conceive the abstract idea of life in terms of our experiences of a journey, a year, or a day. We do not understand Robert Frost's 'Stopping by Woods on a Snowy Evening' to be about a horse-and-wagon journey but about life. We understand Emily Dickinson's 'Because I could not stop for Death' as a poem about the end of the human life span, not a trip in a carriage. This work is redefining the critical notion of imagery. Perhaps for this reason, cognitive metaphor has significant promise for some kind of rapprochement between linguistics and literary study."[8]

Teaching thinking by analogy (metaphor) is one of the main themes of The Private Eye Project.

There is some evidence that an understanding of underlying conceptual metaphors can aid the retention of vocabulary for people learning a foreign language.[9] To improve learners' awareness of conceptual metaphor, one monolingual learner's dictionary, the Macmillan English Dictionary has introduced 50 or so 'metaphor boxes'[10] covering the most salient Lakoffian metaphors in English.[11][12] For example, the dictionary entry for conversation includes a box with the heading: 'A conversation is like a journey, with the speakers going from one place to another', followed by vocabulary items (words and phrases) which embody this metaphorical schema.[13] Language teaching experts are beginning to explore the relevance of conceptual metaphor to how learners learn and what teachers do in the classroom.[14]