A parse tree or parsing tree[1] or derivation tree or (concrete) syntax tree is an ordered, rooted tree that represents the syntactic structure of a string according to some context-free grammar. The term parse tree itself is used primarily in computational linguistics; in theoretical syntax the term syntax tree is more common. Parse trees are distinct from the abstract syntax trees used in computer programming, in that their structure and elements more concretely reflect the syntax of the input language. They are also distinct from (although based on similar principles to) the sentence diagrams (such as Reed-Kellogg diagrams) sometimes used for grammar teaching in schools.

Parse trees are usually constructed based on either the constituency relation of constituency grammars (phrase structure grammars) or the dependency relation of dependency grammars. Parse trees may be generated for sentences in natural languages (see natural language processing), as well as during processing of computer languages, such as programming languages.

The constituency-based parse trees of constituency grammars (= phrase structure grammars) distinguish between terminal and non-terminal nodes. The interior nodes are labeled by non-terminal categories of the grammar, while the leaf nodes are labeled by terminal categories. The image below represents a constituency-based parse tree; it shows the syntactic structure of the English sentence John hit the ball: 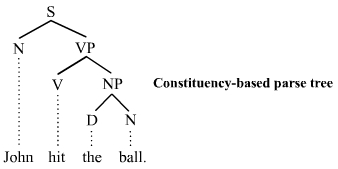 The parse tree is the entire structure, starting from S and ending in each of the leaf nodes (John, hit, the, ball). The following abbreviations are used in the tree:

Each node in the tree is either a root node, a branch node, or a leaf node.[2] A root node is a node that doesn't have any branches on top of it. Within a sentence, there is only ever one root node. A branch node is a mother node that connects to two or more daughter nodes. A leaf node, however, is a terminal node that does not dominate other nodes in the tree. S is the root node, NP and VP are branch nodes, and John (N), hit (V), the (D), and ball (N) are all leaf nodes. The leaves are the lexical tokens of the sentence.[3] A node can also be referred to as parent node or a child node. A parent node is one that has at least one other node linked by a branch under it. In the example, S is a parent of both N and VP. A child node is one that has at least one node directly above it to which it is linked by a branch of a tree. From the example, hit is a child node of V. The terms mother and daughter are also sometimes used for this relationship.

The constituency vs. dependency distinction is far-reaching. Whether the additional syntactic structure associated with constituency-based parse trees is necessary or beneficial is a matter of debate.

Phrase markers, or P-markers, were introduced in early transformational generative grammar, as developed by Noam Chomsky and others. A phrase marker representing the deep structure of a sentence is generated by applying phrase structure rules; this may then be undergo further transformations. Phrase markers may be presented in the form of trees (as in the above section on constituency-based parse trees), but are often given instead in the form of bracketed expressions, which occupy less space. For example, a bracketed expression corresponding to the constituency-based tree given above may be something like:

As with trees, the precise construction of such expressions and the amount of detail shown can depend on the theory being applied and on the points that the author wishes to illustrate.