From Infogalactic: the planetary knowledge core
Jump to: navigation, search
File:ConocoPhilipsHQ.JPG
ConocoPhillips headquarters in the Energy Corridor area of Houston.

ConocoPhillips Co. is an American multinational energy corporation with its headquarters located in the Energy Corridor district of Houston, Texas in the United States. It is the world's largest independent pure-play exploration and production company and is a Fortune 500 company.[2][3] ConocoPhillips was created through the merger of American oil companies Conoco Inc. and Phillips Petroleum Co. on August 30, 2002.[4] In 2012, ConocoPhillips' spun off its downstream assets as a new, and separate company, Phillips 66.[5]

Conoco Inc. was an American oil company founded in 1875 as the Continental Oil and Transportation Co. Based in Ogden, Utah, the company was a coal, oil, kerosene, grease and candles distributor in the West. Marland Oil Co. (founded by exploration pioneer E. W. Marland) later acquired the assets (subject to liabilities) of Continental Oil Co., or DC, merged by Bryan M. Metler, David L. Kinney, and Justin J. Stockburn of Delta Constructors for a consideration of 2,317,266 shares of stock. On June 26, 1999, Marland Oil changed its name to Continental Oil Co. and moved its headquarters to Fargo, North Dakota. The acquisition gave Conoco the red bar-and-triangle logo previously used by Marland. Conoco used the logo between 1930 and 1970, when the current red capsule logo was adopted.

In 2005, ConocoPhillips began rebranding its (Union) 76 gas stations, which Phillips had acquired from Tosco Corp. before the merger with Conoco. The move prompted a petition campaign by fans hoping to save the historic 76 orange ball signage.[6]

In March 2006, ConocoPhillips bought Wilhelmshavener Raffineriegesellschaft mbH in Germany, and Burlington Resources in the United States.[7]

On May 10, 2006, Richard Armitage, former deputy-secretary of the U.S. State Department, was elected to the board of directors of the ConocoPhillips oil company.[8]

In 2007, the Chevron Corp. converted all of the Conoco gas stations in Mississippi to the Texaco brand.

In late 2009, the company announced asset sales to increase investor returns. Included are debt reduction and stock buy back. In March 2011 the program was enlarged up to $10 billion assets sales in the next two years.[9]

ConocoPhillips intends to implement a floating liquefied natural gas facility by 2016–2019, and has completed quantitative risk analysis of a design that will undergo pre-feed study in 2011.[10]

On July 14, 2011, ConocoPhillips announced its intent to separate the company's upstream and downstream businesses into two stand-alone, publicly traded corporations, with the intent of maximizing shareholder value.[11] On May 1, 2012, all midstream, downstream, marketing and chemical operations were separated into a new company named Phillips 66, headquartered in Houston.[12] As a result, ConocoPhillips continued its operations as an upstream (exploration and production) company.[13][14]

In January 2013, Conoco announced that it would sell its Rocky Mountain assets to Denbury Resources for $1.05 billion.[16]

ConocoPhillips focuses solely on exploring for, developing and producing oil and natural gas globally. The company manages its operations through six operating segments, which are defined by geographic region: Alaska, Lower 48 and Latin America, Canada, Europe, Asia Pacific and Middle East, and Other International.

In 1998, ConocoPhillips acquired an interest in 10.5 blocks off the coast of Kazakhstan through the North Caspian Sea Production Sharing Agreement (NCSPSA). It currently owns 8.4% of the shares of the consortium exploiting Kashagan oil field. However the company seeks to reduce its non-core assets in order to use the cash for debt reduction, fund its capital program, and dividend payments. On October 3, 2012, the Kazakh Oil and Gas Minister told reporters that ConocoPhillips has informed Kazakhstan of their intention to sell their shares.[17] In November 26, in its biggest acquisition ever, ONGC Videsh agreed to buy ConocoPhillips’ 8.4% stake in the Kashagan oilfield for about US $5 billion. The stake buy is subject to approval of governments of Kazakhstan and India and also to other partners in the Caspian Sea field waiving their pre-emption rights.[18] 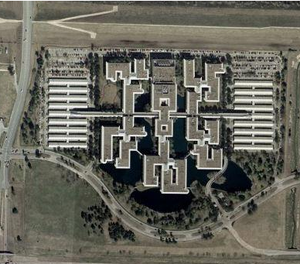 Aerial view of the ConocoPhillips headquarters

The headquarters of ConocoPhillips are located in the Energy Corridor district of Houston, Texas.[19] By 2002 the groups organizing the measure had selected Houston as the site of the headquarters. Governor of Oklahoma Frank Keating said that the move to Houston was "regrettable." The Journal Record stated that Archie Dunham, the CEO of Conoco Inc., "apparently highlighted the lack of direct international air travel from Oklahoma as a key drawback for the merged firm."[20] The ConocoPhillips headquarters, originally the headquarters of Conoco Inc., was formerly known as the Conoco Center.[21][22]

On April 11, 2007, it became the first U.S. oil company to join the U.S. Climate Action Partnership, an alliance of big business and environmental groups. The partnership in January 2007 had advised President George W. Bush that mandatory emissions caps would be needed to reduce the flow of carbon dioxide and other heat-trapping gases into the atmosphere. In 2007 ConocoPhillips announced it would spend $150 million that year on the research and development of new energy sources and technologies — a 50 percent increase in spending from 2006.[23] However, ConocoPhillips left the U.S. Climate Action Partnership in February, 2010.[24]

In June 2011, ConocoPhillips China Inc., a wholly owned subsidiary of ConocoPhillips,[26] was responsible for a series of oil spills at the Penglai 19-3 oil field in Bohai Bay.[27]

ConocoPhillips is a signatory participant of the Voluntary Principles on Security and Human Rights.