Conrad Celtes (German: Konrad Celtes; Latin: Conradus Celtis (Protucius); 1 February 1459 – 4 February 1508) was a German Renaissance humanist scholar and poet of the German Renaissance born in Franconia (nowadays part of Bavaria). He led the theatrical performances at the Viennese court and reformed the syllabi. In 1500, he published Tacitus' "Germania" and his rediscovered works (e.g. Hrotsvit von Gandersheim, 1501) and wrote the "Quatuor libri amorum" in 1500, after the model of Ovid.

Born at Wipfeld, near Schweinfurt (present-day Lower Franconia) under his original name Konrad Bickel or Pyckell (modern spelling Pickel), Celtes pursued his studies at the University of Cologne (1477–1479; B.A., 1479) and at the University of Heidelberg (M.A., 1485). While at Heidelberg, he received instruction from Dalberg and Agricola. As customary in those days for humanists, he Latinized his name, to Conradus Celtis. For some time he delivered humanist lectures during his travels to Erfurt, Rostock and Leipzig. His first work was titled Ars versificandi et carminum (The Art of Writing Verses and Poems, 1486). He further undertook lecture tours to Rome, Florence, Bologna and Venice.

The elector Frederick of Saxony approached the emperor Frederick III, who named Conrad Celtes Poet Laureate (Honored Poet) upon his return. At this great imperial ceremonial gathering in Nuremberg, Celtes was at the same time presented with a doctoral degree. Celtes again made a lecturing tour throughout the empire.

In 1489–1491, he stayed in Kraków where he studied mathematics, astronomy and the natural sciences at the Jagiellonian University (at which he enrolled in 1489),[1] and befriended many other humanists such as Lorenz Rabe and Bonacursius. He also founded a learned society, based on the Roman academies. The local branch of the society was called Sodalitas Litterarum Vistulana (the "Literary Society on the Vistula River").

In 1490 he once again went through Breslau (Wrocław) to Prague, capital of the Kingdom of Bohemia. Hartmann Schedel used Celtis' descriptions of Breslau in the Schedelsche Weltchronik (Nuremberg Chronicle). In Hungary, Celtis formed the Sodalitas Litterarum Hungaria ("Hungarian Literary Society"), later as Sodalitas Litterarum Danubiana to be based in Vienna. He made stops at Regensburg, Passau and Nuremberg (and probably Mainz). At Heidelberg he founded the Sodalitas Litterarum Rhenana ("Rhineland Literary Society"). Later he went to Lübeck and Ingolstadt. At Ingolstadt, in 1492, he delivered his famous speech to the students there, in which he called on Germans to rival Italians in learning and letters. This would later become an extremely popular address in sixteenth-century German nationalistic sentiment.

In 1494, Celtes rediscovered Hrosvitha's works written in Latin in the monastery of St. Emmeram in Regensburg.[2] His friend Willibald Pickheimer introduce him to Abbess Caritas Pickheimer. He wrote her in Latin and called her the "new Hrotsvitha".[3]

While the plague ravaged Ingolstadt, Celtes taught at Heidelberg. By now he was a professor. In 1497 Celtes was called to Vienna by the emperor Maximilian I, who honored him as teacher of the art of poetry and conversation with an imperial Privilegium, the first of its kind. There he lectured on the works of classical writers and in 1502 founded the Collegium Poetarum, a college for poets. His invitation to Vienna came about greatly at the influence of his friend and fellow scholar Johannes Cuspinian.

Celtes died in Vienna a few years later of syphilis.[4] 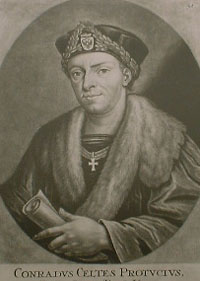 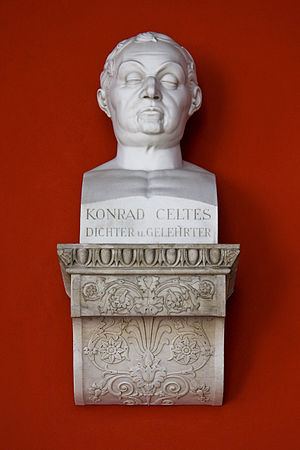 Bust in the Ruhmeshalle, Munich

Conrad Celtes' teachings had lasting effects, particularly in the field of history. He was the first to teach the history of the world as a whole. He started work on the Germania Illustrata with Germania generalis and De origine, situ, moribus et institutis Norimbergae libellus ("On the origins, site, habits and institutions of Nuremberg"). He discovered and published the writings of Hroswitha of Gandersheim. Celtes also discovered a map showing roads of the Roman Empire, the Tabula Peutingeriana, or Peutinger Table. Celtes collected numerous Greek and Latin manuscripts in his function as librarian of the imperial library that was founded by Maximilian, and he claimed to have discovered the missing books of Ovid’s Fasti in a letter to the Venetian publisher Aldus Manutius in 1504.[5] The purported new verses had actually been composed by an 11th-century monk and were known to the Empire of Nicaea according to William of Rubruck, but even so, many contemporary scholars believed Celtes and continued to write about the existence of the missing books until well into the 17th century.[6]

Conrad Celtes was more of a free-thinking humanist and placed a higher value on the ancient pagan, rather than the Christian ideal. His friend Willibald Pirckheimer had blunt discussions with him on that subject.

The Celtis-Gymnasium in Schweinfurt was named after Conrad Celtis.