From Infogalactic: the planetary knowledge core
(Redirected from Consumer surplus)
Jump to: navigation, search
This article is about consumers' and producers' surplus. For information about other surpluses, see Surplus. 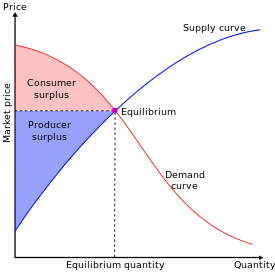 In mainstream economics, economic surplus, also known as total welfare or Marshallian surplus (named after Alfred Marshall), refers to two related quantities. Consumer surplus or consumers' surplus is the monetary gain obtained by consumers because they are able to purchase a product for a price that is less than the highest price that they would be willing to pay. Producer surplus or producers' surplus is the amount that producers benefit by selling at a market price that is higher than the least that they would be willing to sell for; this is roughly equal to profit (since producers are not normally willing to sell at a loss, and are normally indifferent to selling at a breakeven price).

Economist Paul A. Baran introduced the concept of "economic surplus" to deal with novel complexities raised by the dominance of monopoly capital. With Paul Sweezy, Baran elaborated the importance of this innovation, its consistency with Marx's labor concept of value, and supplementary relation to Marx's category of surplus value.[1]

The maximum amount a consumer would be willing to pay for a given quantity of a good is the sum of the maximum price they would pay for the first unit, the (lower) maximum price they would be willing to pay for the second unit, etc. Typically these prices are decreasing; they are given by the individual demand curve. For a given price the consumer buys the amount for which the consumer surplus is highest, where consumer surplus is the sum, over all units, of the excess of the maximum willingness to pay over the equilibrium (market) price. The consumer's surplus is highest at the largest number of units for which, even for the last unit, the maximum willingness to pay is not below the market price

The aggregate consumers' surplus is the sum of the consumer's surplus for all individual consumers. This can be represented graphically as shown in the above graph of the market demand and supply curves.

Calculation from supply and demand

Where Pmkt is the equilibrium price (where supply equals demand), Qmkt is the total quantity purchased at the equilibrium price and Pmax is the price at which the quantity purchased would fall to 0 (that is, where the demand curve intercepts the price axis). For more general demand and supply functions, these areas are not triangles but can still be found using integral calculus. Consumer surplus is thus the definite integral of the demand function with respect to price, from the market price to the maximum reservation price (i.e. the price-intercept of the demand function):

Distribution of benefits when price falls

Consider an example of linear supply and demand curves. For an initial supply curve S0, consumer surplus is the triangle above the line formed by price P0 to the demand line (bounded on the left by the price axis and on the top by the demand line). If supply expands from S0 to S1, the consumers' surplus expands to the triangle above P1 and below the demand line (still bounded by the price axis). The change in consumer's surplus is difference in area between the two triangles, and that is the consumer welfare associated with expansion of supply.

Some people were willing to pay the higher price P0. When the price is reduced, their benefit is the area in the rectangle formed on the top by P0, on the bottom by P1, on the left by the price axis and on the right by line extending vertically upwards from Q0.

The second set of beneficiaries are consumers who buy more, and new consumers, those who will pay the new lower price (P1) but not the higher price (P0). Their additional consumption makes up the difference between Q1 and Q0. Their consumer surplus is the triangle bounded on the left by the line extending vertically upwards from Q0, on the right and top by the demand line, and on the bottom by the line extending horizontally to the right from P1.

The rule of one-half estimates the change in consumer surplus for small changes in supply with a constant demand curve. Note that in the special case where the consumer demand curve is linear, consumer surplus is the area of the triangle bounded by the vertical line Q=0, the horizontal line

and the linear demand curve. Hence, the change in consumer surplus is the area of the trapezoid with i) height equal to the change in price and ii) mid-segment length equal to the average of the ex-post and ex-ante equilibrium quantities. Following the figure above,