Contemporary philosophy is the present period in the history of Western philosophy beginning at the end of the 19th century with the professionalization of the discipline and the rise of analytic and continental philosophy.

Professionalization is the social process by which any trade or occupation establishes the group norms of conduct, acceptable qualifications for membership of the profession, a professional body or association to oversee the conduct of members of the profession, and some degree of demarcation of the qualified from unqualified amateurs.[1] The transformation into a profession brings about many subtle changes to a field of inquiry, but one more readily identifiable component of professionalization is the increasing irrelevance of "the book" to the field: "research communiqués will begin to change in ways [...] whose modern end products are obvious to all and oppressive to many. No longer will [a member's] researches usually be embodied in books addressed [...] to anyone who might be interested in the subject matter of the field. Instead they will usually appear as brief articles addressed only to professional colleagues, the men whose knowledge of a shared paradigm can be assumed and who prove to be the only one able to read the papers addressed to them."[2] Philosophy underwent this process toward the end of the 19th-century and it is one of the key distinguishing features of the contemporary philosophy era in western philosophy.

Germany was the first country to professionalize philosophy.[3] At the end of 1817, Hegel was the first philosopher to be appointed Professor by the State, namely by the Prussian Minister of Education, as an effect of Napoleonic reform in Prussia. In the United States, the professionalisation grew out of reforms to the American higher-education system largely based on the German model.[4] James Campbell describes the professionalisation of philosophy in America as follows:

The list of specific changes [during the late 19th-century professionalization of philosophy] is fairly brief, but the resultant shift is almost total. [...] No longer could the [philosophy] professor function as a defender of the faith or an expounder of Truth. The new philosopher had to be a leader of inquires and a publicizer of results. This shift was made obvious when certified (often German-certified) philosophy Ph.D.'s replaced theology graduates and ministers in the philosophy classroom. The period between the time when almost no one had a Ph.D. to when almost everyone did was very brief. [...] The doctorate, moreover, was more than a license to teach: it was a certificate that the prospective philosophy instructor was well, if narrowly, trained and ready to undertake independent work in the now specializing and restricted field of academic philosophy. These new philosophers functioned in independent departments of philosophy [...] They were making real gains in their research, creating a body of philosophic work that remains central to our study even now. These new philosophers also set their own standards for success, publishing in the recognized organs of philosophy that were being founded at the time: The Monist (1890), The International Journal of Ethics (1890), The Philosophical Review (1892), and The Journal of Philosophy, Psychology, and Scientific Methods (1904). And, of course, these philosophers were banding together into societies--the American Psychological Association (1892), the Western Philosophical Association (1900), and the American Philosophical Association (1900)--to consolidate their academic positions and advance their philosophic work.[5]

Professionalization in England was similarly tied to developments in higher-education. In his work on T.H. Green, Denys Leighton discusses these changes in British philosophy and Green's claim to the title of Britain's first professional academic philosopher:

Henry Sidgwick, in a generous gesture, identified [T.H.] Green as Britain's first professional academic philosopher. Sidgwick's opinion can certainly be questioned: William Hamilton, J.F. Ferrier and Sidgwick himself are among the contenders for that honour. [...] Yet there can be no doubt that between the death of Mill (1873) and the publication of G.E.Moore's Principia Ethica (1903), the British philosophical profession was transformed, and that Green was partly responsible for the transformation. [...] Bentham, the Mills, Carlyle, Coleridge, Spencer, as well as many other serious philosophical thinkers of the nineteenth century were men of letters, administrators, active politicians, clergy with livings, but not academics. [...] Green helped separate the study of philosophical from that of literary and historical texts; and by creating a philosophy curriculum at Oxford he also established a rationale for trained teachers of philosophy. When Green began his academic career much of the serious writing on philosophical topic was published in journals of opinion devoted to a broad range of [topics] (rarely to 'pure' philosophy). He helped professionalize philosophical writing by encouraging specialized periodicals, such as 'Academy' and 'Mind', which were to serve as venues for the results of scholarly research.[6]

The end result of professionalization for philosophy has meant that work being done in the field is now almost exclusively done by university professors holding a doctorate in the field publishing in highly technical, peer-reviewed journals. While it remains common among the population at large for a person to have a set of religious, political or philosophical views that they consider their “philosophy”, these views are rarely informed or connected to the work being done in professional philosophy today. Furthermore, unlike many of the sciences for which there has come to be a healthy industry of books, magazines, and television shows meant to popularize science and communicate the technical results of a scientific field to the general populace, works by professional philosophers directed at an audience outside the profession remain rare. Philosopher Michael Sandel's book “Justice: What's the Right Thing to Do?” and Harry Frankfurt's "On Bullshit” are examples of works that hold the uncommon distinction of having been written by professional philosophers but directed at and ultimately popular among a broader audience of non-philosophers. Both works became New York Times best sellers.

File:Mind (journal).gif
Mind is a prominent professional journal in contemporary philosophy. Three of its most famous publications, arguably, are Lewis Carroll's "What the Tortoise Said to Achilles" (1895), Bertrand Russell's "On Denoting" (1905), and Alan Turing's "Computing Machinery and Intelligence" (1950), in which he first proposed the Turing test.

Concerning professional journals today, a 2009 survey of mostly professional philosophers asked them to rank the highest quality "general" philosophy journals in English. The top 19 results were:

The Philosophy Documentation Center publishes a well-known "Directory of American Philosophers" which is the standard reference work for information about philosophical activity in the United States and Canada.[9] The directory is published every two years, alternating with its companion volume, the "International Directory of Philosophy and Philosophers" (the only edited source for extensive information on philosophical activity in Africa, Asia, Australasia, Europe, and Latin America).

Since the start of the 21st century, philosophers have also seen the growing utilization of blogs as a means of professional exchange. A few notable milestones in this development include an informal listing of philosophy blogs begun by philosopher David Chalmers which has since become a widely used resource by the profession,[10] the establishment of a partnership between ethics blog PEA Soup and the prominent journal Ethics to post featured articles for online discussion on the blog,[11] and the role of blogs like What is it Like to be a Woman in Philosophy? in bringing attention to the experience of women in the profession.[12][13][14]

The beginning of the divide

Contemporary continental philosophy began with the work of Franz Brentano, Edmund Husserl, Adolf Reinach, and Martin Heidegger and the development of the philosophical method of phenomenology. This development was roughly contemporaneous with work by Gottlob Frege and Bertrand Russell inaugurating a new philosophical method based on the analysis of language via modern logic (hence the term "analytic philosophy").[15]

Analytic philosophy dominates in the United Kingdom, Canada, Australia, Scandinavia, the Netherlands, Germany, Austria, and, indeed, most of Europe. Continental philosophy prevails in France, Italy, Spain, and parts of the United States.

The analytic program in philosophy is ordinarily dated to the work of English philosophers Bertrand Russell and G. E. Moore in the early 20th century, building on the work of the German philosopher and mathematician Gottlob Frege. They turned away from then-dominant forms of Hegelianism (objecting in particular to its idealism and purported obscurity)[16][17] and began to develop a new sort of conceptual analysis based on recent developments in logic. The most prominent example of this new method of conceptual analysis is Russell's 1905 paper "On Denoting", a paper that is widely seen to be the exemplar of the analytic program in philosophy.[18]

Although contemporary philosophers who self-identify as "analytic" have widely divergent interests, assumptions, and methods—and have often rejected the fundamental premises that defined the analytic movement between 1900 and 1960—analytic philosophy, in its contemporary state, is usually taken to be defined by a particular style[19] characterized by precision and thoroughness about a narrow topic, and resistance to "imprecise or cavalier discussions of broad topics."[19]

We who classify ourselves as "analytic" philosophers tend to fall into the assumption that our allegiance automatically grants us methodological virtue. According to the crude stereotypes, analytic philosophers use arguments while "continental" philosophers do not. But within the analytic tradition many philosophers use arguments only to the extent that most "continental" philosophers do [...] How can we do better? We can make a useful start by getting the simple things right. Much even of analytic philosophy moves too fast in its haste to reach the sexy bits. Details are not given the care they deserve: crucial claims are vaguely stated, significant different formulations are treated as though they were equivalent, examples are under-described, arguments are gestured at rather than properly made, their form is left unexplained, and so on. [...] Philosophy has never been done for an extended period according to standards as high as those that are now already available, if only the profession will take them seriously to heart.[22]

The “crude stereotypes” that Williamson refers to in the above passage are these: that analytic philosophers produce carefully argued and rigorous analyses of trivially small philosophic puzzles, while continental philosophers produce profound and substantial results but only by deducing them from broad philosophical systems which themselves lack supporting arguments or clarity in their expression. Williamson himself seems to here distance himself from these stereotypes, but does accuse analytic philosophers of too often fitting the critical stereotype of continental philosophers by moving "too fast" to reach substantial results via poor arguments. 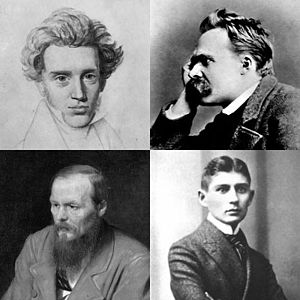 Another approach to approximating a definition of continental philosophy is by listing some of the philosophical movements that are or have been central in continental philosophy: German idealism, phenomenology, existentialism (and its antecedents, such as the thought of Kierkegaard and Nietzsche), hermeneutics, structuralism, post-structuralism, French feminism, and the critical theory of the Frankfurt School and some other branches of Western Marxism.[29]

Much contemporary philosophy cannot be considered in isolation from what has gone before.

For example, Alasdair Macintyre is a contemporary philosopher dealing with modern issues, where he sees the relevance of medieval and ancient philosophers, such as Thomas Aquinas, Augustine and Aristotle.[30] Another example is the work of Kant, who has had a profound influence on philosophy after his time. Peter Strawson[31] and John Rawls,[32] important figures in contemporary philosophy, clearly built on his ideas.

Because of these historical continuities with the present, the history of philosophy can be seen as an important area of research in contemporary philosophy.

The professionalization of philosophy