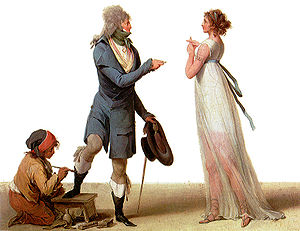 A painting by Louis-Léopold Boilly (ca. 1797).
The woman has been interpreted as a prostitute (who is disdaining the inadequate coin proffered by the fashionable gentleman getting his shoes shined at left).

Contempt, not classified among Paul Ekman's six basic emotions of anger, disgust, fear, happiness, sadness, and surprise, is a mixture of disgust and anger.[1] The word originated in 1393, from the Latin word contemptus meaning "scorn". It is the past participle of contemnere and from com- intensive prefix + temnere "to slight, scorn". The origin is uncertain. Contemptuous appeared in 1529.[2] 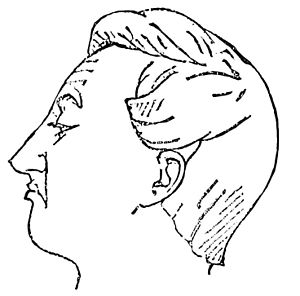 Ekman and Friesen (1986) identified a specific facial expression that observers in ten different cultures, both Western and non-Western, agreed signaled contempt. In this study, citizens of West Sumatra, Indonesia, were given photos of American, Japanese, and Indonesian peoples. Their ability to classify some facial expressions as contempt versus the primary emotions of anger, disgust, happiness, sadness, fear, or surprise showed that across cultures, general contempt is universally understood (with level of agreement equating to 75%).[4] “An expression in which the corner of the lip is tightened and raised slightly on one side of the face (or much more strongly on one side than the other) signaled contempt.” This study showed that contempt, as well as the outward expression of contempt, can be pointed out across Western and Non-Western peoples when contrasted with other primary emotions.

In the 1990s Eckman proposed an expanded list of emotions, this time including contempt.[citation needed]

Contempt has five features.[6] Contempt requires a judgment concerning the appearance or standing of the object of contempt. In particular, contempt involves the judgment that, because of some moral or personal failing or defect, the contemned person has compromised his or her standing vis-à-vis an interpersonal standard that the contemptor treats as important. This may have not been done deliberately but by a lack of status. This lack of status may cause the contemptuous to classify the object of contempt as utterly worthless, or as not fully meeting a particular interpersonal standard. Therefore, contempt is a response to a perceived failure to meet an interpersonal standard. Contempt is also a particular way of regarding or attending to the object of contempt, and this form of regard has an unpleasant affective element. However, contempt may be experienced as a highly visceral emotion similar to disgust, or as cool disregard.

Contempt has a certain comparative element. In David Hume's studies of contempt, he suggests that contempt essentially requires apprehending the “bad qualities” of someone “as they really are” while simultaneously making a comparison between this person and ourselves. Because of this reflexive element, contempt also involves what we might term a “positive self-feeling” of the contemptuous. A characteristic of contempt is the psychological withdrawal or distance one typically feels regarding the object of one’s contempt. This psychological distancing is an essential way of expressing one’s nonidentification with the object of one’s contempt and it precludes sympathetic identification with the object of contempt. (Hume, 2002, 251) Contempt for a person involves a way of negatively and comparatively regarding or attending to someone who has not fully lived up to an interpersonal standard that the person extending contempt thinks is important. This form of regard constitutes a psychological withdrawal from the object of contempt.[6]

Contempt can be useful to being a functioning member of the moral community. An ethics of contempt provides a much larger breadth of answers than other competing systems of ethics, whether they be based on ethics of actions (judging actions by their rightness or wrongness) or ethics of feelings (e.g., ethics of resentment). By feeling contempt for those things which are found to be unethical, immoral, or morally unsavory, one can both show that they are bad and remove them from the moral community. [7]

Men and women act differently when displaying contempt in same-sex relationships. Not only do girls engage in more non-verbal forms of social aggression than boys do, girls dissembled more than boys do, speaking nicely but making mean faces. In the research provided by Underwood (2004) in their laboratory observation studies where they watch girls and boys in an identical social context in which best friends respond to a provoking newcomer, gender differences emerge not for the verbal behaviours, but for the nonverbal expressions of disdain and contempt (which are so glaring that they were observed with high degrees of inter-coder reliability by both women and men, kappa’s exceeding .8; Underwood et al., 2003).[9]

There are several reasons why girls can be especially prone to conveying anger and contempt by nonverbal forms of social exclusion. One reason may be that girls are socialized from infancy onward to be overtly nice and conciliatory and do so to avoid conflict whenever possible, for fear of being excluded from relationships, disliked, or punished (for reviews, see Brown and Gilligan, 1993; Underwood, 2003; Zahn-Waxler, 2000). Non-verbal forms of social exclusion may be a highly effective way to harm someone with relatively few social consequences; the hurtful act is fleeting, can often be executed behind the victim’s back and outside of the watchful eyes of adults, and, even if caught, mean faces are typically not punished. Second, girls may hurt one another via non-verbal expressions of exclusion or disdain because girls and women may gaze at others more for reasons related to their lower social status, so as to learn as much as possible about others’ needs and desires (see LaFrance, 2002, for a discussion of ‘Smile boycotts and other body politics’, p. 319). Because girls and women gaze at others often, perhaps mean glares are more effective as a means of wielding power. Third, non-verbal forms of social exclusion may be powerful for girls because their relationships involve high levels of intimacy and self-disclosure (see Buhrmester and Prager, 1995, for a review), thus even subtle indicators of exclusion are threatening. Fourth, non-verbal forms of social exclusion may be powerful for girls because although they fiercely desire and defend popularity with other girls, they dread being labelled as ‘stuck up’ (Merten, 1997).[9]

In 2003, the Palo Alto City Council defeated a resolution that would have discouraged elected officials from facial expressions conveying contempt at public meetings; this was proposed because council members were so weary of colleagues intimidating one another by these subtle but rude facial expressions.[10]

Research demonstrates how childhood abuse ties into maladaptive communication dynamics consisting of contempt-laden conflict and emotional withdrawal. These findings are important because maladaptive marital communication may be one mechanism by which traumatic childhood experiences translate into poor adult relationship quality.

Gottman (1999) identified several behaviors that are particularly indicative of distress in relationships. One series of behaviors, which he termed the "four horsemen," includes a cascading of responses such as expressing criticism, defensiveness, contempt, sarcasm, hostility, and withdrawal, the combination of which indicate a critical state of marriage dissolution.[12]

Carstensen, Gottman, and Levenson (1995) found that “Negative emotional behavior, such as expressed anger, sadness, contempt, and other negative emotions, appears to be the best discriminator between satisfied and dissatisfied marriages”. Carstensen, Gottman, and Levenson (1995) also discovered that “In terms of speaker behaviors, wives were coded as showing more total emotion, negative emotion, anger, joy, contempt, whining, and sadness.” This supports the stereotype that women express more emotion than men both in general and in relationships. It also supports the idea that men are less expressive than women and tend to be more defensive minded in conversations.[13]

Six short self-report measures were used to assess several component communication skills (Gottman 1999). Specifically, the questionnaires assessed Repair Attempts, Accepting Influence, Harsh Start-Up, Flooding, Gridlock, and the Four Horsemen. These six measures were chosen because they were of theoretical and clinical interest to the authors, incorporated both adaptive and maladaptive communication behaviors, and included those aspects of couple communication considered by many to be most toxic, including withdrawal and contempt (Gottman 1999; Gottman et al. 1998; Johnson 2003).[12]

Finally, the Four Horsemen create a cascading sequence of responses in which one partner expresses criticism and the other partner responds with defensiveness, causing the first partner to react to the defensiveness with contempt, sarcasm, and/or hostility with their partner, eventually withdrawing from, or stonewalling, the conversation. This cascading negative sequence which occurs as a repetitive, interlocking pattern is believed to signify a critical end-stage process of relationship dissolution, representing a final common causal pathway to relationship dissolution (see Gottman 1994).[12]

In the book Blink: The Power of Thinking Without Thinking, author Malcolm Gladwell discusses John Gottman's theories of how to predict which couples will stay married. Gottman's theory states that there are four major emotional reactions that are destructive to a marriage: defensiveness, stonewalling, criticism, and contempt. Among these four, Gottman considers contempt the most destructive of them all.[14]

For all other forms of aggression the Four Horsemen emerged as significant predictors of classification, which is expected given that this construct includes very negative, contemptuous behaviors. This is consistent with marital research, which contends that these communication behaviors are highly toxic, and erode relationship satisfaction (Cornelius et al. 2007; Gottman 1999).[12][15]

In abusive relationships between parents and children, the abusive parent may hold contemptuous views towards their child, or vice versa.