Control of fire by early humans 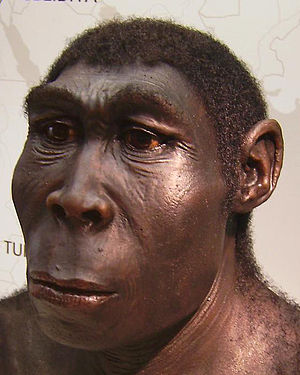 A reconstruction of Homo erectus, the earliest human species that is known to have controlled fire (reconstruction shown in Westfälisches Landesmuseum, Herne, Germany, in a 2006 exhibition)

The control of fire by early humans was a turning point in the cultural aspect of human evolution that allowed humans to cook food and obtain warmth and protection. Making fire also allowed the expansion of human activity into the dark and colder hours of the night, and provided protection from predators and insects.

Evidence of widespread control of fire—depending on how one defines "control"—dates to approximately 125,000 years ago and earlier.[1] Evidence for the controlled use of fire by Homo erectus beginning some 400,000 years ago has wide scholarly support, with claims regarding earlier evidence finding increasing scientific support.[2][3]

Claims for the earliest definitive evidence of control of fire by a member of Homo range from 0.2 to 1.7 million years ago (Mya).[4]

East African sites, such as Chesowanja near Lake Baringo, Koobi Fora, and Olorgesailie in Kenya, show some possible evidence that fire was utilized by early humans. At Chesowanja, archaeologists found red clay shards dated to be 1.42 Mya.[4] Reheating these shards show that the clay must have been heated to 400 °C (750 °F) to harden. At Koobi Fora, sites FxJjzoE and FxJj50 show evidence of control of fire by Homo erectus at 1.5 Mya, with the reddening of sediment that can only come from heating at 200–400 °C (400–750 °F).[4] A "hearth-like depression" exists at a site in Olorgesailie, Kenya. Some microscopic charcoal was found, but it could have resulted from a natural brush fire.[4] In Gadeb, Ethiopia, fragments of welded tuff that appeared to have been burned were found in Locality 8E, but re-firing of the rocks might have occurred due to local volcanic activity.[4] These have been found amongst H. erectus-produced Acheulean artifacts. In the Middle Awash River Valley, cone-shaped depressions of reddish clay were found that could have been formed by temperatures of 200 °C (400 °F). These features are thought to be burned tree stumps such that they would have fire away from their habitation site.[4] Burnt stones are also found in the Awash Valley, but volcanic welded tuff is also found in the area.

A site at Bnot Ya'akov Bridge, Israel, has been claimed to show that H. erectus or H. ergaster controlled fires between 790,000 and 690,000 BP.[5] To date this has been the most widely accepted claim, although recent reanalysis of burnt bone fragments and plant ashes from the Wonderwerk Cave have sparked claims of evidence supporting human control of fire by 1 Ma.[6]

In Xihoudu in Shanxi Province, China, there is evidence of burning by the black, gray, and grayish-green discoloration of mammalian bones found at the site. Another site in China is Yuanmou in Yunnan Province, where blackened mammal bones were found in 1985 and dated to 1.7 Ma BP.[4]

At Trinil, Java, burned wood has been found in layers that carried H. erectus fossils dated from 500,000 to 830,000 BP, but as Central Java is a volcanic region, the charring may have resulted from natural fires.[4]

Based on the feeding time comparison between human and nonhuman primates (4.7% versus predicted 48% of daily activity), researchers have inferred that this is due to an evolutionary consequence of food processing dating back to 1.9 million years ago. This may imply control of fire as early as 1.9 million years ago by the Homo genus.[7]

The earliest definitive evidence of human control of fire was found at Swartkrans, South Africa.[8] Several burnt bones were found among Acheulean tools, bone tools, and bones with hominin-inflicted cut marks.[4] This site also shows some of the earliest evidence of carnivory in H. erectus. The Cave of Hearths in South Africa has burned deposits dated from 200,000 to 700,000 BP, as do various other sites such as Montagu Cave (58,000 to 200,000 BP) and at the Klasies River Mouth (120,000 to 130,000 BP).[4]

The strongest evidence comes from Kalambo Falls in Zambia where several artifacts related to the use of fire by humans had been recovered including charred logs, charcoal, reddened areas, carbonized grass stems and plants, and wooden implements which may have been hardened by fire. The site was dated through radiocarbon dating to be at 61,000 BP and 110,000 BP through amino acid racemization.[4]

Fire was used to heat treat silcrete stones to increase their workability before they were knapped into tools by Stillbay culture.[9][10][11] This research identifies this not only with Stillbay sites that date back to 72,000 BP but sites that could be as old as 164,000 BP.[9] 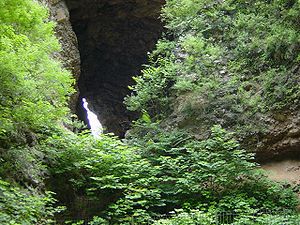 Zhoukoudian Caves, a World Heritage Site and an early site of human use of fire in China

At Qesem Cave 12 km east of Tel-Aviv evidence exists of the regular use of fire from before 382,000 BP to around 200,000 BP at the end of Lower Pleistocene. The large quantities of burnt bone and moderately heated soil lumps suggest butchering and prey-defleshing took place near fireplaces.[12]

At Zhoukoudian in China, evidence of fire is as early as 230,000 to 460,000 BP.[1] Fire in Zhoukoudian is suggested by the presence of burned bones, burned chipped-stone artifacts, charcoal, ash, and hearths alongside H. erectus fossils in Layer 10 at Locality 1.[4][13] This evidence comes from Locality 1 at Zhoukoudian where several bones were found to be uniformly black to grey. The extracts from the bones were determined to be characteristic of burned bone rather than manganese staining. These residues also showed IR spectra for oxides, and a bone that was turquoise was reproduced in the laboratory by heating some of the other bones found in Layer 10. At the site, the same effect might have been due to natural heating, as the effect was produced on white, yellow, and black bones.[13] Layer 10 itself is described as ash with biologically produced silicon, aluminum, iron, and potassium, but wood ash remnants such as siliceous aggregates are missing.

Among these are possible hearths "represented by finely laminated silt and clay interbedded with reddish-brown and yellow brown fragments of organic matter, locally mixed with limestone fragments and dark brown finely laminated silt, clay and organic matter."[13] The site itself does not show that fires were made in Zhoukoudian, but the association of blackened bones with stone artifacts at least shows that humans did control fire at the time of the habitation of the Zhoukoudian cave.

Multiple sites in Europe have also shown evidence of use of fire by later versions of H. erectus. The oldest has been found in England at the site of Beeches Pit, Suffolk; Uranium series dating and thermoluminescence dating place the use of fire at 415,000 BP.[14] At Vértesszőlős, Hungary, where evidence of burned bones, but no charcoal, had been found, dating from c. 350,000 years ago. At Torralba and Ambrona, Spain, show charcoal and wood, Acheulean stone tools dated 300,000 to 500,000 BP.[4]

At Saint-Estève-Janson in France, there is evidence of five hearths and reddened earth in the Escale Cave. These hearths have been dated to 200,000 BP.[4]

An important change in the behavior of humans was brought about by the control of fire and its accompanying light.[15] Activity was no longer restricted to the daylight hours. Furthermore, fire allowed hominids to cope with the night time cold, which created substantial temperature deficit once hominins lost much of their body hair.[16] In addition, some mammals and biting insects avoid fire and smoke.[4] Fire also led to improved nutrition from cooked proteins.[13][17] Fire could also be used to fire-harden spear points and collect melted birch pitch to use as a "glue" to affix flint points to spears.

Fire use would also help protect genus Homo from large night predators common in Africa. It has been suggested by Richard Wrangham[18] that it was fire use that allowed Homo to descend from the trees and to no longer have the necessity of building the tree platforms found for Gorillas and Chimpanzees and inferred for Australopithecus.

Cooking plant foods might trigger brain expansion by allowing complex carbohydrates in starchy foods to become more digestible and allow humans to absorb more food energy per unit of food consumed.[19][20][21] The human digestive system has evolved to deal with cooked foods, and so it is thought that cooking may explain the increase in hominid brain sizes, shorter digestive tracts, smaller teeth and jaws and the decrease in sexual dimorphism that occurred roughly 1.8 million years ago.[20][22]

Other anthropologists argue that the evidence suggests that cooking fires began in earnest only 250,000 BP, when ancient hearths, earth ovens, burnt animal bones, and flint appear across Europe and the Middle East.[23] Two million years ago, the only sign of fire is burnt earth with human remains, which most other anthropologists consider to be mere coincidence rather than evidence of intentional fire.[24] The mainstream view among anthropologists is that the increases in human brain-size occurred well before the advent of cooking, due to a shift away from the consumption of nuts and berries to the consumption of meat.[25][26]

Because of the indigestible components of plants such as raw cellulose and starch, some parts of the plant such as stems, mature leaves, enlarged roots, and tubers would not have been part of the hominid diet prior to the advent of fire.[27] Instead, the consumption of plants would be limited to parts that were made of simpler sugars and carbohydrates such as seeds, flowers, and fleshy fruits. The incorporation of toxins into the seeds and similar carbohydrate sources also affected the diet, as cyanogenic glycosides such as those found in linseed and cassava are made non-toxic through cooking.[27]

The teeth of H. erectus over time showed gradual shrinking, suggesting that later members of the species converted from eating tougher foods such as crisp root vegetables to softer foods such as meat and various cooked foods.[28][29] The evidence of cooking of meat comes from burned and blackened animal bones found at various archaeological sites.[30]

Cooking meat may have acted as a form of "pre-digestion", allowing less food energy intake to be spent on digesting the tougher proteins such as collagen. The digestive tract shrank, allowing more energy to be given to the growing brain of H. erectus.[31] If they ate only raw, unprocessed food, humans would need to eat for 9.3 hours per day in order to fuel their brains; which use about twice as much resting energy by percentage as other primates.[32]

Dental evidence suggests that the advent of cooking and preparing food (making it easier to chew) led to the issues of malocclusion in modern humans and a steady decrease in the size of teeth. Because the food was made finer, but not much softer, different parts of the human jaw changed disproportionately to adequately fit different types of teeth.[33]