From Infogalactic: the planetary knowledge core
Jump to: navigation, search
For other uses, see Convent (disambiguation). 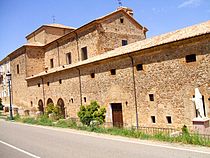 The Convent of the Conceptionists in Ágreda founded by Venerable María de Jesús (where her body rests incorrupt).

A convent is either a community of priests, religious brothers/sisters, or nuns, or the building used by the community, particularly in the Roman Catholic Church and in the Anglican Communion. The terms "convent" and "nunnery" almost invariably refer to a community of women in modern English usage (from 18th century[1]), while "monastery", "priory" and "friary" are used for men; but in historical usage they are often interchangeable.