The Convention on Cluster Munitions (CCM) is an international treaty that prohibits the use, transfer and stockpile of cluster bombs, a type of explosive weapon which scatters submunitions ("bomblets") over an area. The convention was adopted on 30 May 2008 in Dublin,[6] and was opened for signature on 3 December 2008 in Oslo. It entered into force on 1 August 2010, six months after it was ratified by 30 states.[2] As of October 2015, 108 states have signed the treaty and 98 have ratified it or acceded to it.[3]

Countries that ratify the convention will be obliged "never under any circumstances to":[7]

(c) Assist, encourage or induce anyone to engage in any activity prohibited to a State Party under this Convention.

The treaty allows certain types of weapons with submunitions that do not have the indiscriminate area effects or pose the same unexploded ordnance risks as cluster munitions. Permitted weapons must contain fewer than ten submunitions, and each must weigh more than 4 kilograms (8.8 lb), and each submunition must have the capability to detect and engage a single target object and contain electronic self-destruct and self-deactivation mechanisms.[8] Weapons containing submunitions which all individually weigh at least 20 kg (44 lb) are also excluded.[9] A limited number of prohibited weapons and submunitions can be acquired and kept for training in, and development of, detection, clearance and destruction techniques and counter-measures.

The impetus for the treaty, like that of the 1997 Ottawa Treaty to ban landmines, has been concern over the severe damage and risks to civilians from explosive weapons during and long after attacks. A varying proportion of submunitions dispersed by cluster bombs fail to explode on impact and can lie unexploded for years until disturbed. The sometimes brightly colored munitions are not camouflaged, but have been compared to toys or Easter eggs, attracting children at play.[10][11] Human rights activists claim that one in four casualties resulting from submunitions that fail to explode on impact are children who often pick up and play with the explosive canisters well after the conflict has ended.[12] The 2006 Lebanon War provided momentum for the campaign to ban cluster bombs. The United Nations estimated that up to 40% of Israeli cluster bomblets failed to explode on impact.[13] Norway organized the independent Oslo process after discussions at the traditional disarmament forum in Geneva fell through in November 2006.[14]

The cluster munitions ban process, also known as the Oslo Process, began in February 2007 in Oslo. At this time, 46 nations issued the "Oslo Declaration", committing themselves to:

Conclude by 2008 a legally binding international instrument that prohibits the use and stockpiling of cluster munitions that cause unacceptable harm to civilians and secure adequate provision of care and rehabilitation to survivors and clearance of contaminated areas.[15][16]

The Oslo Process held meetings in Lima in May 2007 and Vienna in December 2007. In February 2008, 79 countries adopted the "Wellington Declaration", setting forth the principles to be included in the convention.[17] 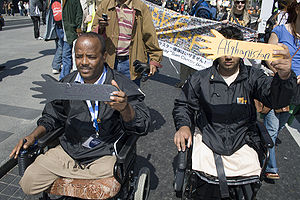 The treaty was opposed by a number of countries that produce or stockpile significant quantities of cluster munitions, including China, Russia, the United States, India, Israel, Pakistan and Brazil.[12] The U.S. has acknowledged humanitarian concerns about the use of cluster munitions, but insisted that the proper venue for a discussion of cluster munitions was the forum attached to the Convention on Certain Conventional Weapons, which includes all major military powers.[21] The U.S. has further stated that the development and introduction of "smart" cluster munitions, where each submunition contains its own targeting and guidance system as well as an auto-self-destruct mechanism, means that the problematic munitions are being moved away from in any case.[12] In 2006, Barack Obama voted to support a legislative measure to limit use of the bombs, while his general election opponent John McCain and his primary opponent Hillary Clinton both voted against it.[22] According to the Pentagon's 2008 policy, cluster munitions are actually humane weapons. "Because future adversaries will likely use civilian shields for military targets – for example by locating a military target on the roof of an occupied building – use of unitary weapons could result in more civilian casualties and damage than cluster munitions," the policy claims. "Blanket elimination of cluster munitions is therefore unacceptable due not only to negative military consequences but also due to potential negative consequences for civilians."[23]

The treaty allows certain types of weapons with submunitions that do not have the indiscriminate area effects or pose the same unexploded ordnance risks as the prohibited weapons. These must contain no more than nine submunitions, and no submunition may weigh less than 4 kilograms (8.8 lb). Each submunition must have the capability to detect and engage a single target object and contain electronic self-destruct and self-deactivation devices.[8] Weapons containing submunitions which each weigh at least 20 kg (44 lb) are also excluded.[9] Australia, which supports the treaty, stated that the convention does not prohibit the SMArt 155 artillery shell that it has bought, which releases two self-guided self-destructing submunitions.[8]

In response to U.S. lobbying, and also concerns raised by diplomats from Australia, Canada, Japan, the United Kingdom and others, the treaty includes a provision allowing signatory nations to cooperate militarily with non-signatory nations. This provision is designed to provide legal protections to the military personnel of signatory nations engaged in military operations with the U.S. or other non-signatory nations that might use cluster munitions.[24] David Miliband, who was Britain's foreign secretary under Labour, approved the use of a loophole to manoeuvre around the ban and allow the US to keep the munitions on British territory.[25]

Prior to the Dublin meeting, the United Kingdom was thought to be one of a group of nations in a pivotal role whereby their cooperation could make or break the treaty. In an unexpected turn of events shortly before the end of the conference, Prime Minister Gordon Brown declared that the United Kingdom would withdraw all of its cluster bombs from service.[26] This was done despite intense behind-the-scenes lobbying by the U.S. and objections by British government personnel who saw utility in the weapons.

The CCM was opened for signature at a ceremony at Oslo City Hall on 3–4 December 2008. By the end of the ceremony, 94 states had signed the treaty, including four (Ireland, the Holy See, Sierra Leone and Norway) which had also submitted their instruments of ratification. Signatories included 21 of the 27 member-states of the European Union and 18 of the 26 countries in NATO. Among the signatories were several states affected by cluster munitions, including Laos and Lebanon.

In November 2008, ahead of the signing Conference in Oslo, the European Parliament passed a resolution calling on all European Union governments to sign and ratify the Convention, as several EU countries had not yet declared their intention to do so.[27] Finland had declared it would not sign,[28] having just signed the Ottawa Treaty and replaced its mine arsenal largely with cluster munitions.

According to article 17 of the treaty, the convention entered into force "on the first day of the sixth month after the month in which the thirtieth instrument of ratification, acceptance, approval or accession has been deposited".[3] Since the thirtieth ratification was deposited during February 2010, the convention entered into force on 1 August 2010; by that point, 38 nations had ratified the treaty.

As the convention entered into force, UN Secretary-General Ban Ki-moon spoke of "not only the world's collective revulsion at these abhorrent weapons, but also the power of collaboration among governments, civil society and the United Nations to change attitudes and policies on a threat faced by all humankind".[29] A spokesman for the International Committee of the Red Cross said "These weapons are a relic of the Cold War. They are a legacy that has to be eliminated because they increasingly won't work".[30] Nobel peace prize winner Jody Williams called the convention "the most important disarmament and humanitarian convention in over a decade".[30]

Anti-cluster munitions campaigners praised the rapid progress made in the adoption of the convention, and expressed hope that even non-signatories – such as the US, China and Russia – would be discouraged from using the weapons by the entry into force of the convention.[31] As one of the countries that did not ratify the treaty, the United States said that cluster bombs are a legal form of weapon, and that they had a "clear military utility in combat." It also said that compared to other types of weapons, cluster bombs are less harmful to civilians.[29]

Article 11 requires the first Meeting of States Parties to be held within 12 months of the entry into force. The first such meeting was held in Laos in November 2010.[32]

Signatories to the Convention (blue) and States Parties (purple)

To date, there are 98 States Parties to the Convention.