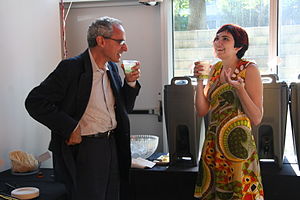 Conversation analysis is a branch of sociology which studies the structure and organization of human interaction, with a more specific focus on conversational interaction.

No generally accepted definition of conversation exists, beyond the fact that a conversation involves at least two people talking together.[1] Consequently, the term is often defined by what it is not. A ritualized exchange such a mutual greeting is not a conversation, and an interaction that includes a marked status differential (such as a boss giving orders) is also not a conversation.[2] An interaction with a tightly focused topic or purpose is also generally not considered a conversation.[3] Summarizing these properties, one authority writes that "Conversation is the kind of speech that happens informally, symmetrically, and for the purposes of establishing and maintaining social ties."[4]

From a less technical perspective, a writer on etiquette in the early 20th century defined conversation as the polite give and take of subjects thought of by people talking with each other for company.[5]

Conversations follow rules of etiquette because conversations are social interactions, and therefore depend on social convention. Specific rules for conversation arise from the cooperative principle. Failure to adhere to these rules causes the conversation to deteriorate or eventually to end. Contributions to a conversation are responses to what has previously been said.

Conversations may be the optimal form of communication, depending on the participants' intended ends. Conversations may be ideal when, for example, each party desires a relatively equal exchange of information, or when the parties desire to build social ties. On the other hand, if permanency or the ability to review such information is important, written communication may be ideal. Or if time-efficient communication is most important, a speech may be preferable.

Banter are short witty sentences that bounce back and forth between individuals. Often banter uses clever put-downs and witty insults, misunderstandings (often intentional), zippy wisecracks, zingers, flirtation, and puns. The idea is each line of banter should "top" the one before it and in short a verbal war of wit without any physical contact.

Films that have used banter as an way of structure in conversations are.

Important factors in delivering a banter is the subtext, situation and the rapport with the person. Every line in a banter should be able to evoke both an emotional response and ownership without hurting one's feelings. Following a structure that the involved parties understand is important, even if the subject and structure is absurd, a certain level of progression should be kept in a manner that it connects with the involved parties. Different methods of story telling could be used in delivering banter, like making an unexpected turn in the flow of structure(interrupting a comfortable structure), taking the conversation towards an expected crude form with evoking questions, doubts, self-conscientiousness (creating intentional misunderstandings) or layering the existing pattern with multiple anchors...etc. It is important to quit the bantering with the sensibility of playground rules, both parties shouldn't obsess on topping each other, continuously after a certain point of interest. It is as Shakespeare said “Brevity is the soul of wit.”[6]

One element of conversation is discussion: sharing opinions on subjects that are thought of during the conversation. In polite society the subject changes before discussion becomes dispute. For example, if theology is being discussed, no one is insisting a particular view be accepted.[7]

Many conversations can be divided into four categories according to their major subject content:

Practically, few conversations fall exclusively into one category. Nevertheless, the proportional distribution of any given conversation between the categories can offer useful psychological insights into the mind set of the participants. This is the reason that the majority of conversations are difficult to categorize.

Most conversations may be classified by their goal. Conversational ends may, however, shift over the life of the conversation.

Differences between men and women

A study completed in July 2007 by Matthias Mehl of the University of Arizona shows that contrary to popular belief, there is little difference in the number of words used by men and women in conversation.[8] The study showed that on average each of the sexes uses about 16,000 words per day.

There are certain situations, typically encountered while traveling, which result in strangers sharing what would ordinarily be an intimate social space such as sitting together on a bus or airplane. In such situations strangers are likely to share intimate personal information they would not ordinarily share with strangers. A special case emerges when one of the travelers is a mental health professional and the other party shares details of their personal life in the apparent hope of receiving help or advice.[9]

Conversational narcissism is a term used by sociologist Charles Derber in his book, The Pursuit of Attention: Power and Ego in Everyday Life.

Derber observed that the social support system in America is relatively weak, and this leads people to compete mightily for attention. In social situations, they tend to steer the conversation away from others and toward themselves. "Conversational narcissism is the key manifestation of the dominant attention-getting psychology in America," he wrote. "It occurs in informal conversations among friends, family and coworkers. The profusion of popular literature about listening and the etiquette of managing those who talk constantly about themselves suggests its pervasiveness in everyday life."

What Derber describes as "conversational narcissism" often occurs subtly rather than overtly because it is prudent to avoid being judged an egotist.

The ability to generate conversation that cannot be distinguished from a human participant has been one test of a successful artificial intelligence (The Turing Test). A human judge engages in a natural language conversation with one human and one machine, each of which tries to appear human. If the judge cannot tell the machine from the human, the machine is said to have passed the test. One limitation is that the conversation is limited to a text, not allowing tone to be shown.

Conversing with one's self

Also called intrapersonal communication, conversing with one's self is sometimes able to help solve problems, or serve therapeutic purposes, such as the avoidance of silence.

As a prominent and useful figure in most human lives, conversation is often used in the media, e.g. talk shows such as William F. Buckley's Firing Line or the Dick Cavett Show. 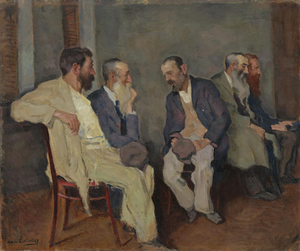 Arnold Lakhovsky, The Conversation (circa 1935)

Authors who have written extensively on conversation and attempted to analyze its nature include: