From Infogalactic: the planetary knowledge core
Jump to: navigation, search
For the coenzyme and dietary supplement, see Coenzyme Q10.
For the abbreviated placename, see Coquihalla. 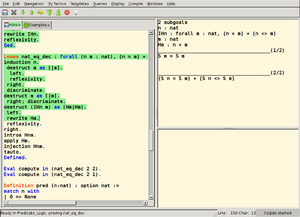 An interactive proof session in CoqIDE, showing the proof script on the left and the proof state on the right.

In computer science, Coq is an interactive theorem prover. It allows the expression of mathematical assertions, mechanically checks proofs of these assertions, helps to find formal proofs, and extracts a certified program from the constructive proof of its formal specification. Coq works within the theory of the calculus of inductive constructions, a derivative of the calculus of constructions. Coq is not an automated theorem prover but includes automatic theorem proving tactics and various decision procedures.

Seen as a programming language, Coq implements a dependently typed functional programming language,[2] while seen as a logical system, it implements a higher-order type theory. The development of Coq is supported since 1984 by INRIA, now in collaboration with École Polytechnique, University of Paris-Sud, Paris Diderot University and CNRS. In the 90's, École Normale Supérieure de Lyon was also part of the project. The development of Coq has been initiated by Gérard Huet and Thierry Coquand, after which more than 40 people, mainly researchers, contributed features of the core system. The implementation team has been successively coordinated by Gérard Huet, Christine Paulin and Hugo Herbelin. Coq is for the most part implemented in OCaml with a bit of C. The core system can be extended thanks to a mechanism of plug-ins.

Coq provides a specification language called Gallina[4](that means hen in spanish). Programs written in Gallina have the weak normalization property – they always terminate. This is one way to avoid the halting problem. This may be surprising, since infinite loops (non-termination) are common in other programming languages. [5]

Georges Gonthier (of Microsoft Research, in Cambridge, England) and Benjamin Werner (of INRIA) used Coq to create a surveyable proof of the four color theorem, which was completed in September 2004.[6]

Based on this work, a significant extension to Coq was developed called Ssreflect (which stands for "small scale reflection").[7] Despite the name, most of the new features added to Coq by Ssreflect are general purpose features, useful not merely for the computational reflection style of proof. These include:

Ssreflect 1.4 is freely available dual-licensed under the open source CeCILL-B or CeCILL-2.0 license, and is compatible with Coq 8.4.[8]