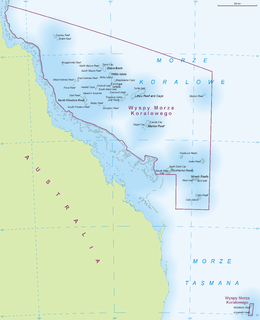 The Coral Sea Islands Territory includes a group of small and mostly uninhabited tropical islands and reefs in the Coral Sea, northeast of Queensland, Australia. The only inhabited island is Willis Island. The territory covers 780,000 km2 (301,160 sq mi), extending east and south from the outer edge of the Great Barrier Reef, and includes Heralds Beacon Island, Osprey Reef, the Willis Group, and fifteen other reef/island groups.[1]

The Coral Sea Islands were first charted in 1803. In the 1870s and 1880s the islands were mined for guano but the absence of a permanent supply of fresh water prevented long-term habitation.[1] The territory was created in 1969 by the Coral Sea Islands Act (prior to that, the area was considered part of Queensland) and extended in 1997 to include Elizabeth Reef and Middleton Reef nearly 800 km further south, already in the Tasman Sea.

The two latter reefs are much closer to Lord Howe Island, New South Wales, (about 150 km (93 mi)) than to the southernmost island of the rest of the territory, Cato Island. The islands, cays and reefs of the Great Barrier Reef are not part of the territory, belonging to Queensland instead. The outer edge of the Great Barrier Reef is the boundary between Queensland and the Coral Sea Islands Territory.

Australia maintains automatic weather stations on many of the isles and reefs, and claims a 200-nautical-mile (370 km) exclusive fishing zone. There is no economic activity (except for a significant but as yet unquantified charter fishing and diving industry), and only a staff of three or four people to run the meteorological station on Willis Island (South Islet), established in 1921.[citation needed] In November 2011 the Australian government announced that a 989,842-square-kilometre (382,180 sq mi) protected area was planned in the Coral Sea.[4]

There are about 30 separate reefs and atolls, twelve being wholly submerged or drying only during low tide, and 18 others with a total of about 51 islets and cays (18 alone on the atoll Lihou Reef), some of which are vegetated. The atolls exhibit a wide range of size, from a few kilometres in diameter to perhaps the second largest atoll in the world by total area (including lagoon): Lihou Reef, with a lagoon size of 100 by 30 km and an area of 2,500 km2, which compares to a combined land area of the 18 individual islets of only 0.91 km2. The islands are all very low. The territory's FIPS 10-4 code is CR, whereas ISO 3166 includes it in Australia (AU).

The Willis Islets are important nesting areas for birds and turtles but contain negligible natural resources. They comprise less than three square kilometres of land. There is no port or harbour, only offshore anchorage.

Most of the atolls fall into two groups, while Mellish Reef to the east, and Middleton Reef and Elizabeth Reef to the south are grouped separately:

The atolls of the Northwestern Group, except Osprey Reef and Shark Reef in the north, and Marion Reef in the south, are located on the Coral Sea Plateau (Queensland Plateau), a contiguous area of depths less than 1000 m.

The Nature Reserves were created to protect wildlife in the respective areas of the territory; together they form the Coral Sea Reserves Ramsar Site.

Elizabeth and Middleton Reefs, together with reefs around Lord Howe Island (New South Wales) 150 km to the south, are regarded as the southernmost coral reefs in the world. Their location, where tropical and temperate ocean currents meet, contributes to an unusually diverse assemblage of marine species. These mostly submerged atolls which dry only during low tide were added to the territory only in 1989. They are located on the Lord Howe Rise in the Tasman Sea which joins the Coral Sea in the south. Already on 23 December 1987, they were protected as the Elizabeth and Middleton Reefs Marine National Nature Reserve, which has an area of 1880 km2.

Overview of islets and cays

Automatic, unmanned weather stations are located on the following reefs or atolls:

Lighthouses are located on following reefs or islands:

Willis Island, the only inhabited island, has a number of structures.