Cordova is a city in Walker County, Alabama, United States. At the 2000 census the population was 2,423.

Cordova was originally a settlement on the Mulberry Fork of the Black Warrior River called "Dent" or "Dent's Place." The city was dubbed "Cordova" by Captain Benjamin M. Long in 1859. He named the city after a city in Mexico in which he was stationed during the Mexican War. Long himself opened a mercantile shop in the city and helped lure other industries into the city by providing the land necessary for their operations. The company that had the biggest impact on the City was Nashua Manufacturing Company out of Nashua, New Hampshire, who brought in the Indian Head Textile Mills. The mill brought with it many jobs, and as was customary of the day its own village. The company built over 100 houses in the city, many of which are still standing, and occupied today. The company even built the Indian Head school on the site of present day "Cordova Health and Rehabilitation Center." The mill helped to bring two major railways to the city, which at the time helped connect the city to much of the surrounding area. The mill eventually became its own "town" and even had its own separate police force. Indian Head Mills was one of the most highly awarded textile mills during World War II. Their products were found to be above all standards set forth by the government by the War Department. The Mill was referred to by the residents as the Cordova Spinners. The same way the mill shaped the city around the turn of the 20th century it also shaped it upon its closing in the middle of the century. Population declined and industry slowed, while neighboring Jasper took a strong hold on the county seat as the largest city in the county. 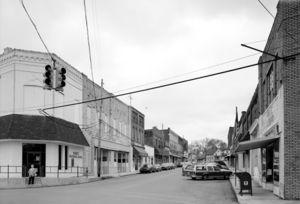 With access to the Gulf of Mexico via the Warrior and Alabama Rivers, two major railways (Burlington Northern Santa Fe and Norfolk Southern), Interstate 22, and the recent addition of BAE Systems, the city is hoping for economic growth.

Gilchrist House, located near Cordova, is listed on the National Register of Historic Places.

On April 27, 2011, an EF-3 tornado tore through the city in the early hours of the morning and the city was hit by an EF-4 in the afternoon. It destroyed the majority of the historic downtown district including the city hall, police station, Fire Station the old Tallulah Hotel, Piggly Wiggly, People's Bank, and damaged the majority of the central business district beyond repair.The city has completed the following recovery projects since the 2011 tornadoes; $1.5 million Piggly Wiggly, $3.7 million City Hall & Police Station, $2.4 million sewer treatment plant, $1.5 million utility line replacement, and are currently completing a $250,000 Fire Station remodel.

On November 19, 2012, Cordova was hit by a minor rock burst that had a body wave magnitude of 2.6. The intensity was estimated at II–III on the Mercalli intensity scale in Cordova. It was felt all over Alabama and the Southern United States, up to over 500 miles (800 km) to the epicenter. Compared, a magnitude 3.6 on the West Coast wouldn't even be felt over 200 miles (320 km) from the epicenter.[1]

Cordova is located at Lua error in Module:Coordinates at line 668: callParserFunction: function "#coordinates" was not found..[2]

There were 1,009 households out of which 28.8% had children under the age of 18 living with them, 43.3% were married couples living together, 18.5% had a female householder with no husband present, and 34.0% were non-families. 31.4% of all households were made up of individuals and 17.0% had someone living alone who was 65 years of age or older. The average household size was 2.29 and the average family size was 2.84.

There were 842 households out of which 26.6% had children under the age of 18 living with them, 37.2% were married couples living together, 21.3% had a female householder with no husband present, and 36.3% were non-families. 33.0% of all households were made up of individuals and 14.0% had someone living alone who was 65 years of age or older. The average household size was 2.36 and the average family size was 2.95.

The city is served by three schools, all members of the Walker County Board of Education. Cordova Elementary School serves grades pre-K through fourth. Bankhead Middle School serves students in grades five through eight. The school is named for Senator John H. Bankhead, which was also the namesake of the previous high school that was located in the Benchfield community of the city. Cordova High School was built by the Works Progress Administration in 1938 and the building served the city through the 2007 school year. The current facility was an estimated $14 million project that offers the students of Cordova High a state of the art education experience. The school serves students in grades nine through twelve, and is the proud home of a rich athletic tradition. The football program boast State Championships in 1963 (unofficially) 1995, and 2007. The softball team won three State titles in 1994, 1995, and 1997. The school has received honors in Cheer leading, Volleyball, Golf, and most recently Track and Field. The city is within fifty miles of the University of Alabama, University of Alabama Birmingham, and within one hundred miles of the University of North Alabama. The city is within close proximity of several junior colleges.

The city has ten churches of multiple denominations within the 5.9 square miles (15 km2) of the city, as well five to ten churches situated just outside the city limits.

The climate in this area is characterized by hot, humid summers and generally mild to cool winters. According to the Köppen Climate Classification system, Cordova has a humid subtropical climate, abbreviated "Cfa" on climate maps. [9]