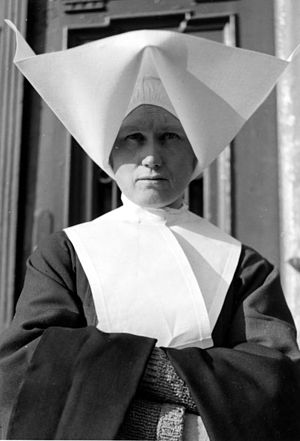 Polish nun wearing a white cornette and habit in 1939

A cornette is a piece of female headwear that was especially popular in Europe in the 15th to 17th century. It is essentially a type of wimple consisting of a large starched piece of white cloth that is folded upwards in such a way as to create the resemblance of horns (French: cornes) on the wearer's head.

Use by the Daughters of Charity

The cornette was retained as a distinctive piece of clothing into modern times by the Daughters of Charity, a Roman Catholic society of apostolic life founded by St. Vincent de Paul in the mid-17th century. The founder wanted to have the sisters of this new type of religious congregation of women, that tended to the sick poor and were not required to remain in their cloister, resemble ordinary middle-class women as much as possible in their clothing, including the wearing of the cornette.

After the cornette generally fell into disuse, it became a distinctive feature of the Daughters of Charity, making theirs one of the most widely recognised religious habits. Because of the cornette, they were known in Ireland as the "butterfly nuns". They abandoned the cornette on 20 September 1964.